We just got back from 10 days in Cody, Wyoming where we finally started working on our new property.  While did not get as much done as I had hoped (a day trip to Yellowstone, the “help” of small children, and a bad case of food poisoning for my wife) it felt good to get started.

Most of the trip focused on getting the old garage cleaned up and ready to store tools and the truck for the winter.  This essentially took the entire trip despite the previous owners “clearing it out”.  Its been an unusually wet summer in Cody (almost double the annual rainfall so far) and the failed roof let huge amounts of moisture into the structure, rotting or rusting almost everything.  There was quite a lot of junk left behind (including an ancient fridge that required a freon disposal charge) and 20 years of filth that need to be removed and metal pieces everywhere (my 5-year-old nearly filled a 5-gallon bucket using a rolling magnet).  We also ripped out some of the drywall and wiped everything down.

The extra rainfall also caused a plant explosion on the property and almost two full days were spent using the string trimmer to clear paths between buildings, driveways, and to uncover outdoor debris.  This extra growth also made it harder to find debris to clean up.  At one point we, my sister and I attempted to drive across the south pastures only to find nail filled 2x4s and plywood hidden by the grass.  We filled half of the truck bed before a rattlesnake hiding under a sheet of plywood made us call it a day.
All of this work meant that it wasn’t until day 4 that we made it beyond the original homestead site.  We were walking the potential building sites with our architect when we realized the previous owners had taken the contents of the garage and simply dumped them into the property’s old dumpsite.  Oil, chemicals, welding rods, you name it, then simply dumped it in a hole on top of the beer bottles and old TV’s that had previously filled the site.  Along with them taking some of the gates with them, I am very annoyed with the sellers and wish we did not have to deal with them in the future (we did partial seller finance).

In the end we took nearly ¾ of a ton of scrap metal to the scrapyard (at $50 it was almost not worth the fuel) and made 4 dump runs in the f250 and this is wall just from one building (three more to go).  A local earth-mover is going to come in with a mini-excavator and dump truck to clear the dumpsite and take it to the city dump where is will be placed in a lined pit to prevent groundwater contamination (only 1k of extra cost…).

My sister and I also walked about half of the property the county weed & pest assistant director and got a rundown of what we need to deal with.  While its not the worst site she has seen, we have a large number of noxious weeds that we need to get under control with the biggest issues being Russian Knapweed (Centaurea repens), Canadian Thistle (Cirsium arvense), and White Top (lepidium draba).  This is in addition to the Cheatgrass (Bromus tectorum L.) I already knew about.  We have acres of knapweed that will need to be addressed which unfortunately means we will need to spray to knock it back and then try to outcompete it with native grasses and then add biological controls as well while we wait out 7 years for organic status.  On the plus side, she said noted that the areas of our property that have never been irrigated are almost completely native (other than some yellow sweet clover) and in pretty good shape.  Once we get it cordoned off with new fences we can supplement with some additional native seeds and we should have a nice home for wildlife.  Luckily, Russian Knapweed and Cheatgrass can be sprayed in the winter when most other plants are inactive so hopefully the effect on native plants will be minimal.

One thing I would highly recommend is the new DeWalt 60volt system.  The string trimmer outlasted me most days (though I might get a replacement head) and the angle grinder make short work of the scrap I had to cut up.  I am planning on getting the compressor at some point in the future. 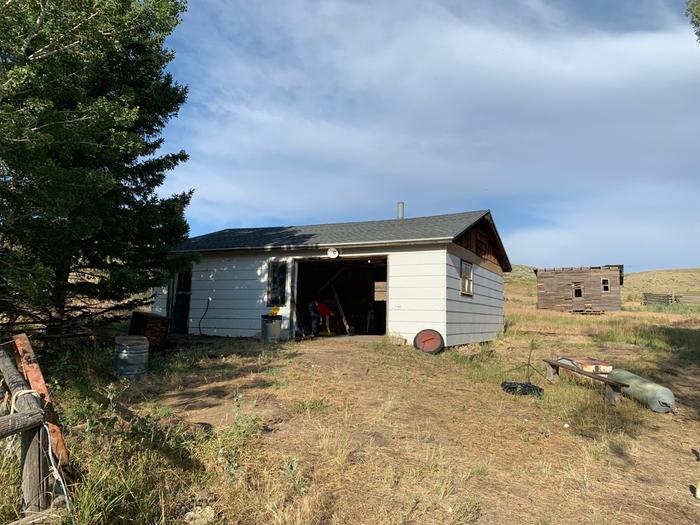