Vespa velutina in Europe - any thoughts?

posted 7 months ago
Hello from Portugal,

Last year we tried our luck with our first beehive. Not everything went as planned, but from what i managed to figure out, all the glitches might have been worked out - except for the wasps ( https://en.wikipedia.org/wiki/Asian_hornet ). We ended up with an entirely empty hive around November - six dead bees, zero larvae, and 3 frames nearly full of honey. The floor was covered with bits of legs and wings.

For those of you who don't know about it, a few years ago a queen wasp has been brought into (i think) France in a shipment from China. It multiplied like crazy and is now all over the northern half of Portugal, where i live.

They happened to be the nigrothorax variety, which is slightly smaller than usual. Result: the worker wasps are able to pass through hive protection plates, you know, the ones that are supposed to keep anything out of the hive other than bees... And the amount of "lazy" (i.e. benevolent, non-intrusive) beekeeping here in Portugal means any wasp nest is guaranteed to have a feast of honeybee meat just about everywhere.

Baited traps help to reduce queen numbers in spring, but they also wreak havoc with our native (and mostly harmless) Vespa crabro.

The only long-term  hope i can see seems to be abandoning the entire race of european honeybees and getting asian honeybees instead...

Landrace bees might work. But that won't be easy at all, starting with the expense and time needed, and the difficulty in getting asian honebees of sufficient genetic diversity, and the huge diversity in european climate/vegetation/beekeeping practices that would require LOTS of different asian bee starting locations... am i right?

Anyone has any experience with such an issue?

I'm not keeping bees yet, but we have Japanese giant hornet (Vespa mandarinia japonica). Just took care of a queen making a nest in our azalea patch yesterday with hornet spray. So I was just looking up about their life cycle and stuff.

Lots of info about different traps, including live traps, and methods of finding the nests.

Looks like V. nigrothorax is smaller than V. crabro? 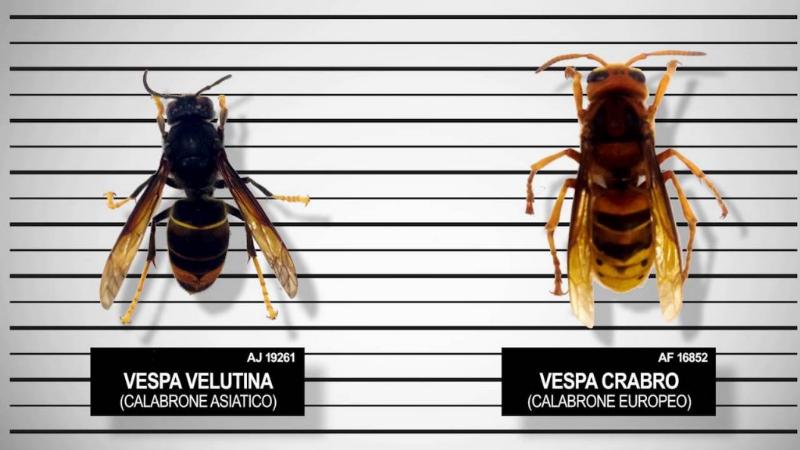 Could you make the entrance holes on the bait trap smaller to exclude the native V. crabro?

There are a lot of live traps used in Japan that are attached to the hive entrance that seem to be successful in protecting the hive.
In general how they work: Red line shows path of hornets, blue lines show paths of honey bees.

From: http://urasoe-apiary.sakura.ne.jp/suzumebati.html They are keeping western bees. Google translate is pretty good, but if you have questions feel free to ask and I will translate! 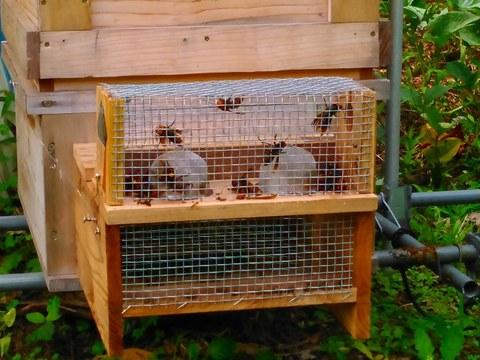 Are you saying the worker V. nigrithorax are the same size as honey bees so they would pass through the screen?

posted 7 months ago
Thanks for this Amy!

Apparently yes, the worker wasps around here are longer than honeybees but can squeeze through similar sized holes. I might even venture guessing our collective efforts at trapping or excluding wasps like this could be selecting for smaller wasps every year! I remember reading somewhere it's one of the smaller varieties of velutina.

Still, i guess i will try to work out this kind of trap, build one over next winter, and get a new swarm next spring.

How happy are Japanese beekeepers about western bees? Does the increased vulnerability to wasps get compensated by a larger honey harvest? What happens in the long term?

posted 7 months ago
Something like 90% of honey produced in Japan is from western bees. The traps are a one time cost, so I think their vulnerability isn't a deterrent to keeping them. It's better than hanging out around the hives and beating the hornets down with sticks, which is what they used to do. Western bees seem to be more vulnerable to pollutants and climate change than Japanese bees. There is a movement toward increasing native bee production.

I don't know of anyone who keeps western bees in our village. The side of the road and side of the mountains are littered with log hives set up for native bees. Not all are occupied. Older villagers have said the bee population isn't what it used to be. And no wonder, all the abandoned land and fields are mulched with plastic. There's hardly enough flowers to support the number of hives that are set up. We'll see if we can change that in the next few years.

I hope the trap works for you. As far as I can tell, the honey bees fly straight through and the hornets fly up into the trap area because they are attracted to the light from the hole. It sounds like you could maybe make the trap chamber mesh small enough to trap all workers and hopefully very few honey bees would find their way in there. I agree that by letting the smaller workers go, you are selecting for smaller and smaller hornets. It would be ideal to get them all. Please let us know how it goes for you!

Tony Hallett
Posts: 31
1
posted 4 months ago
I know this thread is somewhat old now but I'd like to leave a comment so I can keep track of any more replies.
My shouldabeenbynow Wife (thanks covid) and I are moving to our piece of land in Coimbra District soon and we would love to get some hives set up as soon as we get there to hopefully catch a swarm at some point.
The hornets do have me a bit worried though, and not just about my anaphylaxis! (seriously allergic to wasps, hornet to me looks like the bigger nastier brother so I don't fancy my chances!)
I'd love to know if you find a solution for catching them. You have a very valid point re selectively breeding a more troublesome pest and I would agree that catching all of them would be beneficial in the long run.
I wonder if there are any plants to help deter them as an extra line of defence. I believe there's a couple that supposedly keep wasps away but at the moment I can't remember what they are!