Supressing bindweed when there's no space for big perennials

Janina Goerrissen
Posts: 6
Location: Germany, hardiness zone 7a
posted 8 years ago
Hey there, I'm new to this forum though I've already read quite a bit through here, and I've been interested in permaculture for years now. In february, my husband and I moved into our newly-bought home in Germany, which also has a nice, small-ish garden (small compared to what other people seem to have - I like its compact size). It's segmented into 5 different areas, divided by concrete paths, so I've decided that I'd go little by little to transform it all into a lush, edible landscape. This year I only worked on the part where the veggie patch was and will continue to be - sheet mulched everything (the top mulch layer should be much thicker, but I just couldn't get more material for now), layed out the design, and by now a few plants are already growing there apart from the already established raspberries and black currant.
However, especially at the edges of the garden, very close to the berries, I've discovered bindweed pushing through the cardboard. For now I've been pulling out the new sprouts as I see them, some of it I feed to my turtles, but it's just a matter of time that I overlook something and it starts taking over from there.

Of course, I'd like to find a way to control it that doesn't involve daily check-ups. I've read about barrier plants like jerusalem artichoke, maximilian sunflower and comfrey which can keep the bindweed down (supposedly), but as far as I can see, they're all pretty big plants that need quite a bit of space. Since I'm not done yet with the whole area, I still hesitate to put comfrey anyway because I'll still have to dig around to plant more stuff, and I don't want to cut its roots and spread it everywhere. As for the other two, they spread a lot too, and the spot is right next to the neighbor's garden (and I'm not sure he'd appreciate them), so I'm not sure they're the right fit, either. Besides, while jerusalem artichokes do sound like a cool plant to have, I don't know it planting and harvesting them so close to the currants and raspberries would disturb their roots. Behind the raspberries is a very inaccesible place anyway, so I'd like something that I don't need to do much with.

So I'd much prefer smaller plants to do the job of supressing the bindweed, plus ones that don't spread too much on their own.

Okay, I'm attaching (as Imageshack doesn't seem to work) two photos of the area I'm talking about, so you can get a better idea. I marked the spots where I'v noticed most bindweed coming up with red arrows. Where the raspberries are, it's right beneath / behind them right next to the neighbor's garden. And I suppose they'd be coming from there even if I managed to erradicate them on my side, so that seems pointless. And as I said, it's pretty hard to access that spot.

The other spot it comes up is right next to the currant (sort of between the currant and the rain barrel, and also around the barrel), also next to the neighbor's garden edge. In any of the cases, the space available is only about 50 cm wide.

Sooo... does anyone have any ideas of what I could plant there to keep the bindweed from entering and spreading through my garden?
Bindweed.jpg 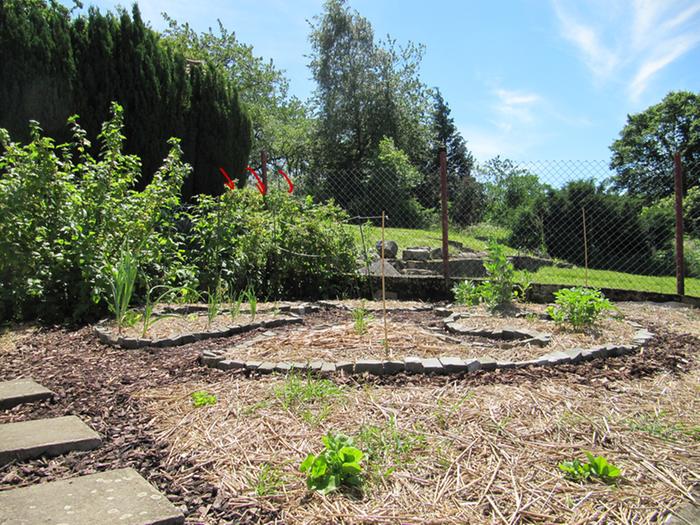 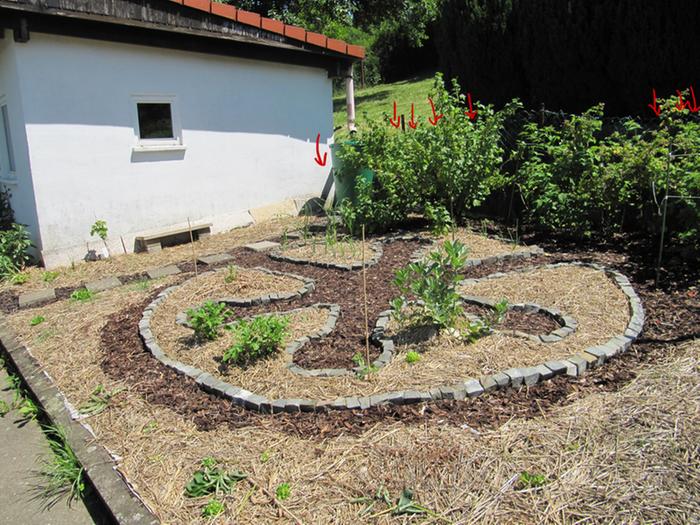 I helped a friend get bindweed under control in her garden a few years ago. Mostly it was growing in similar situation to yours - coming in from a neighbours and growing up through shrubs and trees.

Can you put in a physical barrier on the boundary eg some tin dug into the ground, rather than planting something? You will also need to look at when and how the plants are seeding. With the plants that are on your side, I think deep mulching and regular weeding might work (you shouldn't need to do that every day though!). Bindweed hates having its roots disturbed, so the other option is to shift the existing plants and cultivate that part of the garden for a few years.

I don't have time to write anything else now, so will just drop some links that I found very helpful.

Hmm, I'll certainly look into the possibility of putting in a physical barrier. I don't know if it's possible yet (probably difficult in some spots), but I'm thinking about it. And I'll definitely add more mulch material as I go and try to get a dense groundcover growing, too. The latter can obviously take some time.

I'm not considering re-locating the existing plants for the time being, I think it's a good place for them.
Rose Pinder
Posts: 416
Location: Otago, New Zealand
3
posted 8 years ago
Maybe some chooks to scratch around at the bottom of the raspberries?

I think all the work with bindweed is at the start. Later it gets easier. Deep mulch also makes weeding easier.

Strategies to prevent the plant reproducing seem crucial too, which is why I find that long link so useful.