Blake Pulley
Posts: 3
posted 10 years ago
Hey there everyone, Ive watched the forum for some time now and I have been inspired by the people on here.

I have a homemade greenhouse or a hot house for some years now but ive never had a way to heat it and I could only use it in the late spring and by then it’s easier to start stuff outdoors. This year the greenhouse needs updated so I drew up some plans to put in a rocket mass heater. But I had an idea of using water as the mass in the rocket mass heater (along with some clay/cement mix as mass too).

My dad works at a place that makes vitamins and they have big 55gal drums that they throw out and I was thinking that I could put water in the drums and run them along exhaust. That way the rocket mass heater heats up the water to a hot temp and over the night the water slowly cools down and keeps the greenhouse warm all night.

Heres a pic of my plan to show you what im talking about: 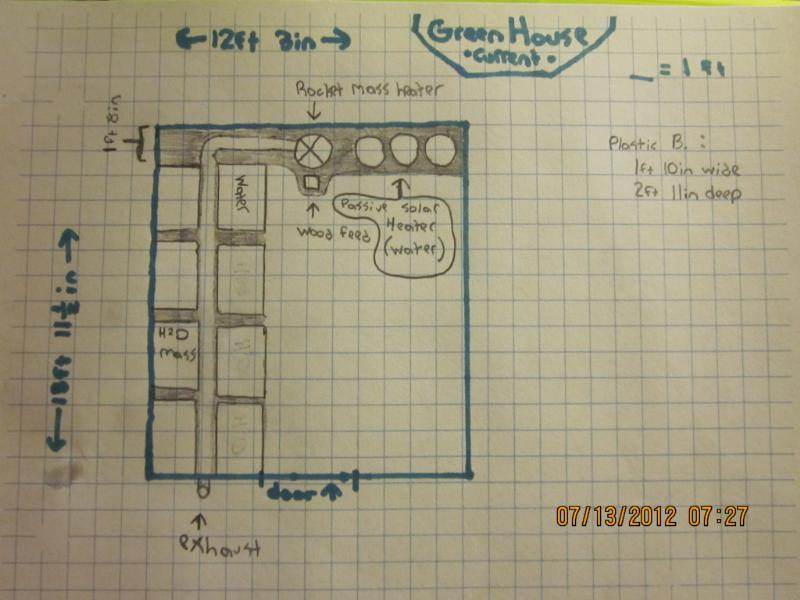 and heres what my greenhouse looked like new a few years ago: 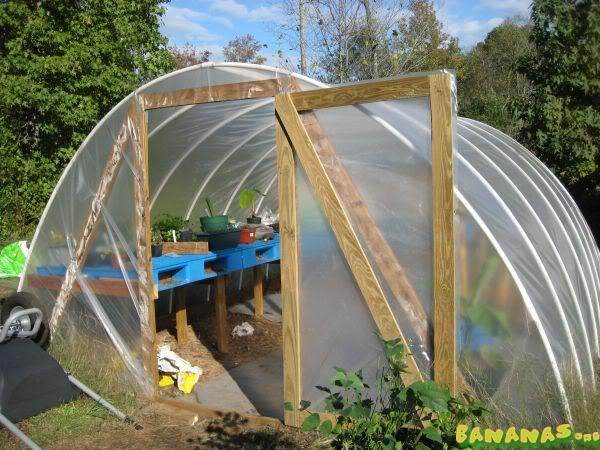 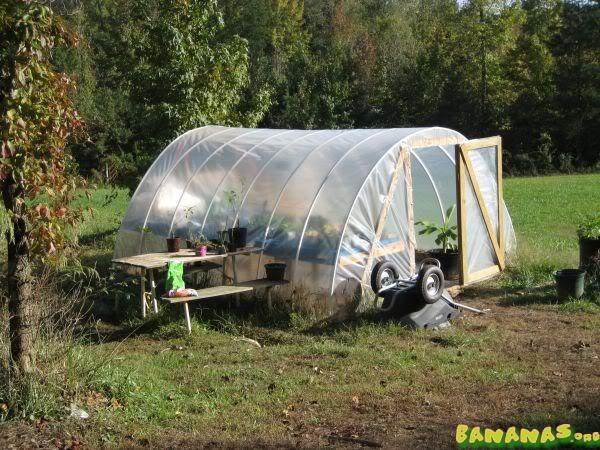 Richard Gurry
Posts: 16
posted 10 years ago
That looks like a great design. However it has a lot of surface area exposed to outer walls. Maybe put mylar blankets around bottom 2-3 feet of green house where radiant heat from your thermal storage could be reflected back.

How are you channeling your exhaust through the H20 for thermal mass?

~Knowledge is Power and it's very lightweight~

Richard Gurry wrote: However it has a lot of surface area exposed to outer walls. Maybe put mylar blankets around bottom 2-3 feet of green house where radiant heat from your thermal storage could be reflected back.

The green house will have square sides with a plywood wall on the front back and the left side. The walls will be insulated with straw, and I think I might put some Mylar blankets down now too. Also Here is a pic of what it will look like. 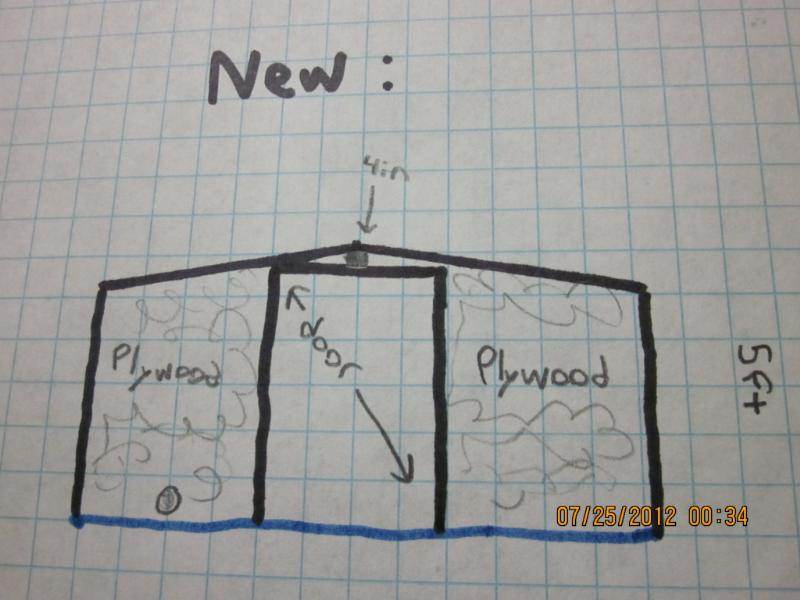 And just for comparison heres the old design: 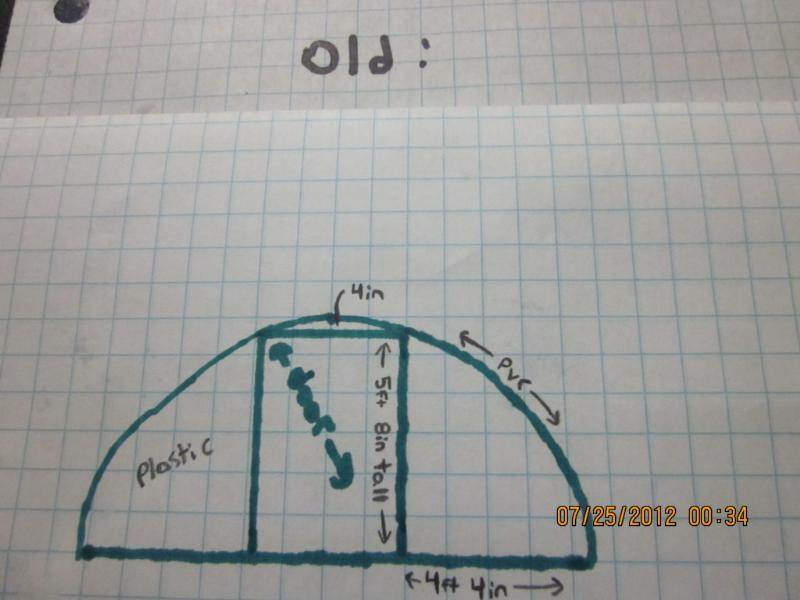 Richard Gurry wrote:How are you channeling your exhaust through the H20 for thermal mass?

Heres a little mock up I made with some scrap pipe and barrels. The white PVC pipe would be the 6in metal ducting exhaust. There would be a clay concrete mixture filling up all the air space around the barrels and pipe. 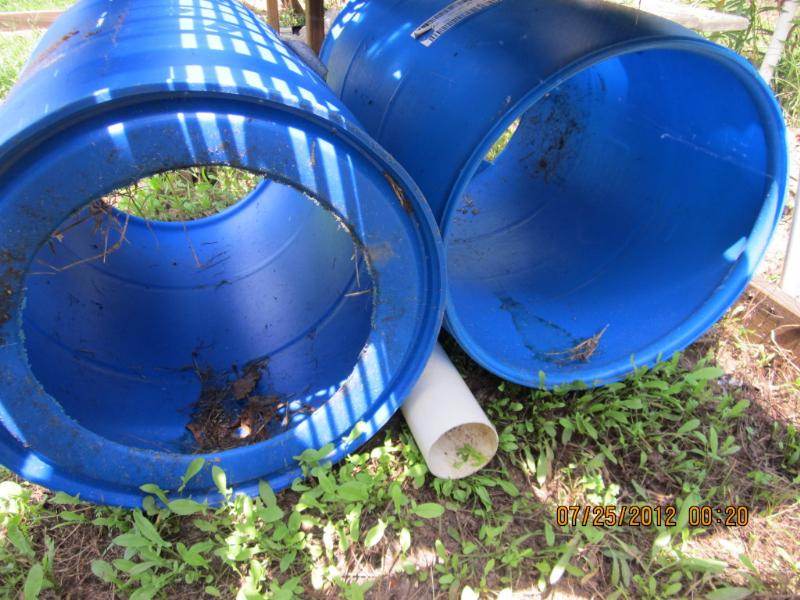 Posts: 791
Location: Tonasket washington
49
posted 10 years ago
Why not sub soil to fill the space? seems sad to use cement in a greenhouse.

clem nelson
Posts: 6
posted 10 years ago
got to love this forum! way better than farce/in your face /book.live from wisconsin.got to go,it's time for the pitbulls singing lessons,i have no choice.
clem nelson
Posts: 6
posted 10 years ago
new to this forum,love it.just got wind of the rocket,not to be confused with lowell georges' rocket in my pocket.been reading older posts on the rocket,great.my wisconsin mind wondered after our 10 pm singing lessons.warmth of the hearth and warmth of the heart of the dumped found pitbull brood mare i've had for just over ayear now. the pit bull was totally un socialized,singing has replaced barking(for the most part).she is a total sweatheart and not a badsinger.after much reading the american staffordshire terrier is the most loyal breed you can find,that is why really dumb ignorant humans can train them to be bad,so sad.for many decades they were americas dog,known as the nanny dog,looked after the children.is it okay to get off topic and ramble on this forum?live from wisconsin!
Shane McKenna
Posts: 50
Location: Utah
posted 10 years ago
Water is a very efficient heat transfer medium. Your mass will heat up faster, and cool down faster. You could get a balanced benefit from both the soil and water. The only thing I would be concerned with is having water get hot enough to expand and leak out of your barrel, having a soil buffer between the exhaust tubing and the water should be sufficient to deal with that possibility.

We are considering barrels in our walipini design as the retaining walls and have discussed the same concept, except we are going to be building upwards (stacking barrels). We are thinking of sand clay mix in the bottom barrels, then water in the ones above. The bottom barrels will take the direct heat, the upper barrels will get passive heat.

Balint Bartuszek
Posts: 56
Location: Hungary
posted 10 years ago
I am with you on the concrete idea, at least between the barrel and the pipe. It transfers heat better than clay, and has the same thermal expansion rate as the steel, so your pipe will not get separated from the concrete.
But i would use cob for the barrels that are closest to the heater, also i would put them a bit more apart. This way the water will have less difference in temperature between barrels. Also do not fill the barrels full!
Mike Kimble
Posts: 23
posted 10 years ago
Here's some pics on what I did to heat my hoop house...

013.JPG
017.JPG
019.JPG
Blake Pulley
Posts: 3
posted 9 years ago
Heres an update on the progress... I am constantly tweaking the design a little bit. Like making a cold air intake for the fire, so that way the fire isn’t drawing warm air from the inside of the greenhouse (making cold air get drafted into the greenhouse). Like outside air is running through the whole rocket mass heater system, no air from the inside of the greenhouse is being drafted out. And I have tried cob but it didn’t have enough sand or something and when it dried it had major cracks right down to the brick so now im in the process of taking some of the clay cob off and I have an idea of using stacked stones and mortar instead of cob around the rocket mass heater. Also I just went with packed clay around the exhaust pipe. Its around 1-2inches thick in the closest part to the water holding plastic barrels. Oh and the barrels are filled a little more than ¾ full of water. 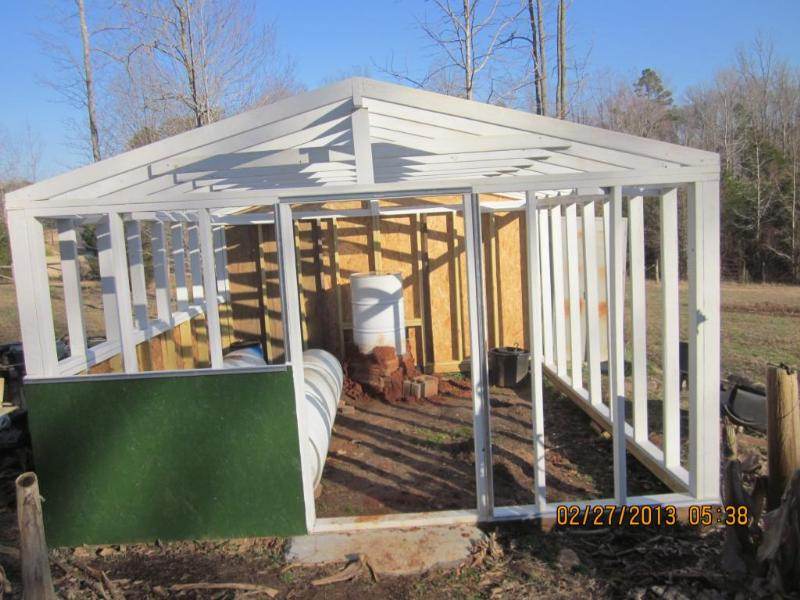 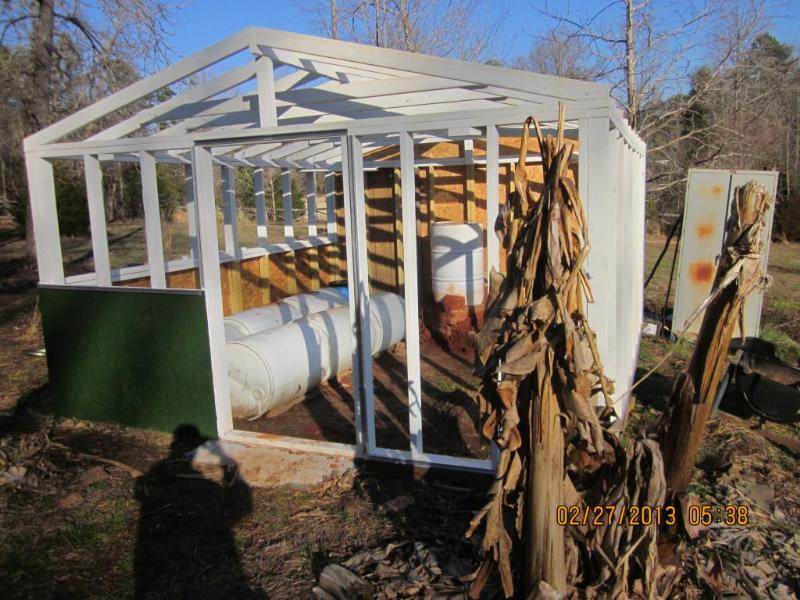 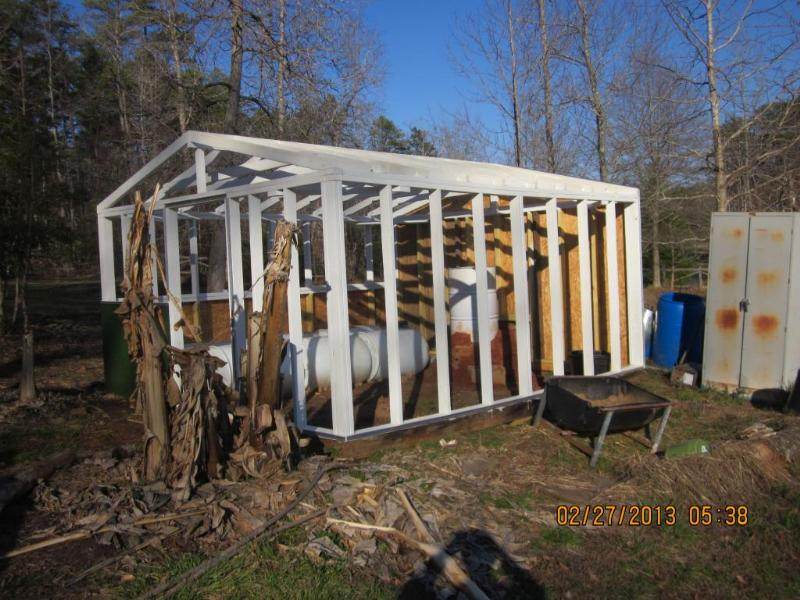 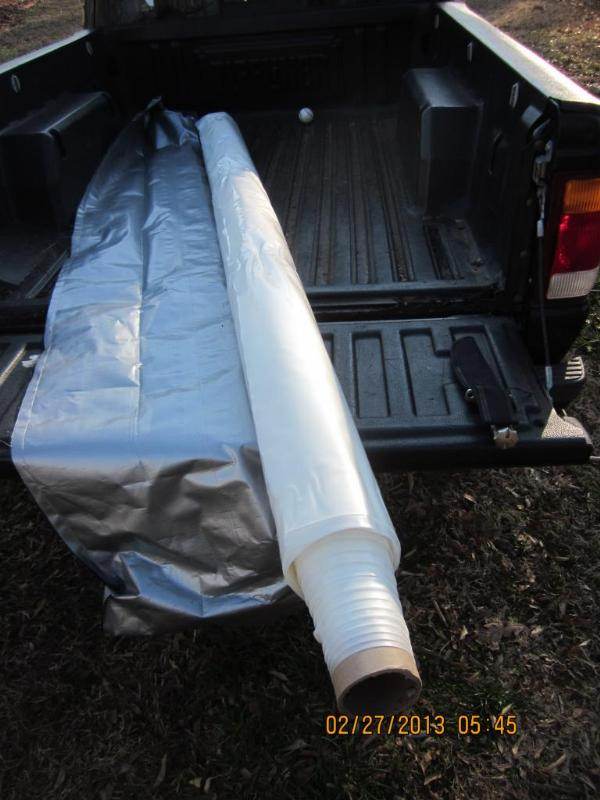 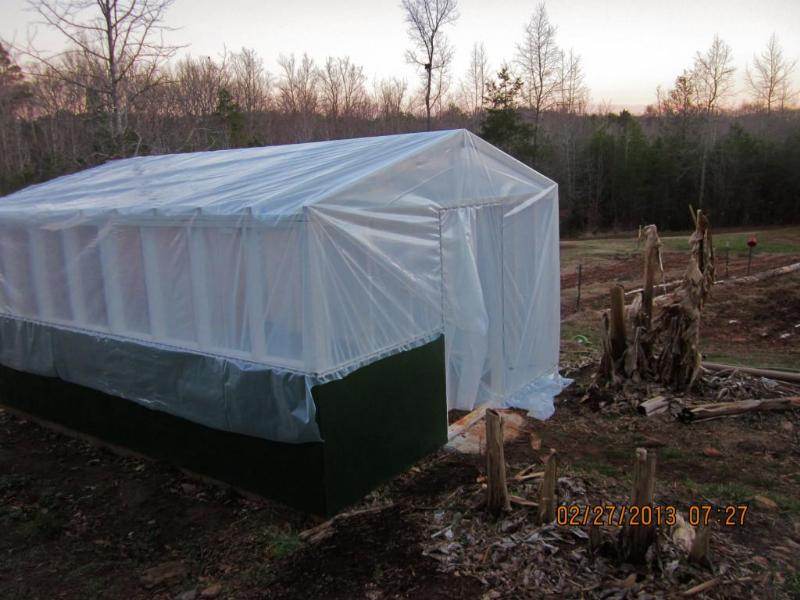 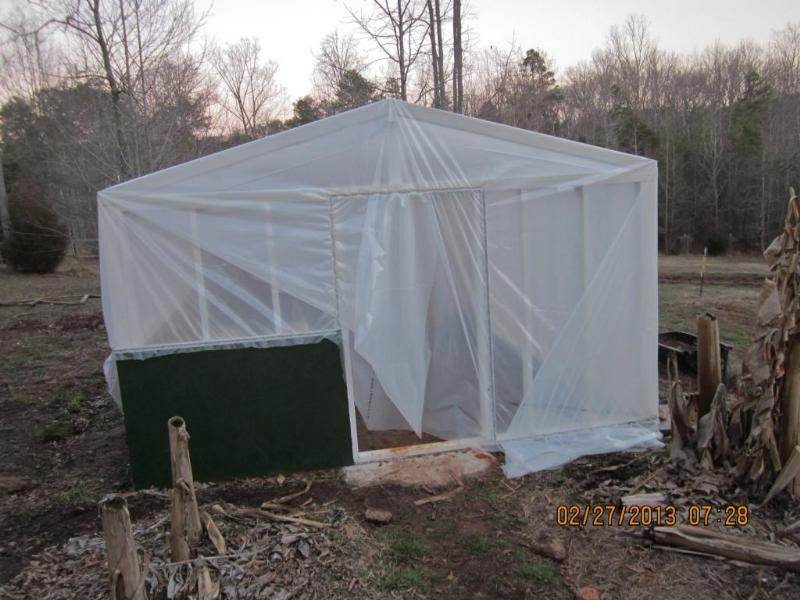 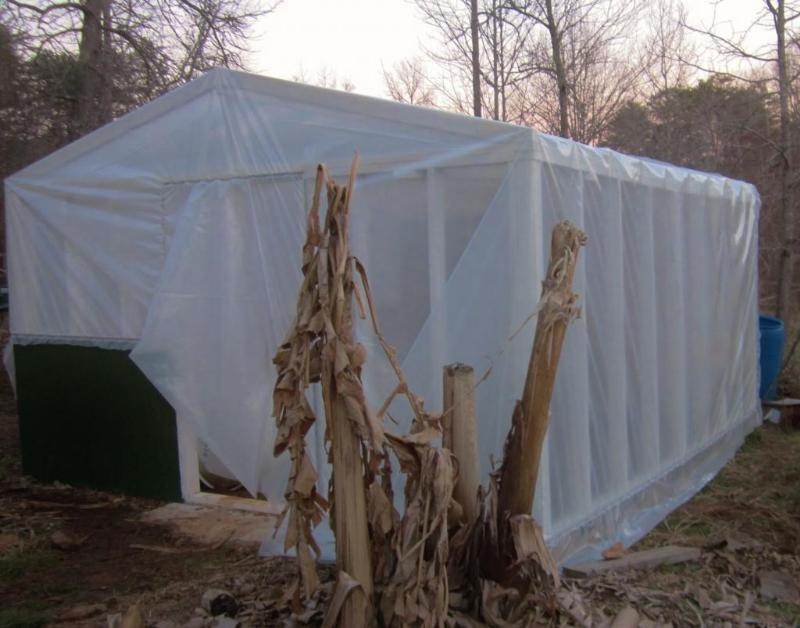