Has anyone fed sunflower seed to poultry in order to make the feathers fall out easily?

posted 7 years ago
In Intrduction to Permaculture there is this nugget:


Bill says, don't feed sunflowers to chickens because they make the feathers fall out easily. Thelma Snell, reading this after initiation into the joys of chicken plucking, suggested that we should save our sunflower seed to feed to those chickens we are about to slaughter. It will make the feather removal operation much easier! That's permaculture thinking folks. Just stand limitations on their heads to create opportunities.

I love that anecdote because Bill himself missed a "problem is the solution!"

Anyway, has anyone actually tried this? With about a week and a half to Thanksgiving day harvest I thought I'd give it a shot! Especially because last week I had to dry pluck a turkey who had strangled itself on some netting & I didn't have time for scalding water before heading off to work. It was slow going.

Is there any reason not to do this. So far, the only drawback is that it's twice the price of regular (non-organic) feed. $13 for 20 lbs. It was extra annoying that it was taxed when feed isn't. I bought the Black Oil Sunflower seed. It's abbreviated to BOSS on some of the poultry forums. There seemed to be some concern that too much could stress the liver.

So the experiment will be to feed them BOSS, no other feed except apples and whatever they forage on their own. They are Royal Palms, a heritage breed good at foraging.

I'll report back in 2 weeks but if anyone has tried this before, let me know your observations!

Posts: 7926
Location: Currently in Lake Stevens, WA. Home in Spokane
323
posted 7 years ago
I'm not so sure that it would make them any easier to pluck, but the outfit I worked with years ago would feed BOSS to their hens to promote an early moult. They didn't want all of the hens moulting at the same time, so they tried to stage it, coop-by-coop.
See this post: https://permies.com/forums/posts/list/28454#222767

I only worked there winter times, so never got to witness the whole thing. They claimed it 'helped'.
The hens that it didn't work on, were usually exempted from their normal seasonal cullings. ("Keepers")

John Elliott
pollinator
Posts: 2392
90
posted 7 years ago
Really? This sounds like it could fall into the category of "old wives' tales" to me. Maybe because birds start molting in late summer, just about the time sunflower heads are ripe.....I can see why the association would be made.

If it's true, where's the real science? Not "They claimed it 'helped'", but some real science pinning down the active agent in the sunflower seed that induces molting?
Cj Sloane
pollinator
Posts: 3738
Location: Vermont, off grid for 24 years!
103
I like...

posted 7 years ago
I just happen to have the actual quote from Bill Mollison:


Your conditions are different, because you have a winter close-down period, and you have some of your food in store. So grow more sunflowers, or whatever, but not all sunflowers, because if the chickens get too much sunflower seed, their feathers drop out. That's because there is too much oil in their body, and the feathers are very loosely attached in their sockets.

I don't think it's due to harvesting of sunflower seed because he was talking about growing some for storage.

As for science, I have already mentioned I'm conducting my own experiment!

John Elliott
pollinator
Posts: 2392
90
posted 7 years ago
That's sounding more like science, CJ. More fat in the diet might be the metabolic signal the chicken body needs to get to start molting. With that hypothesis though, it may not be just sunflowers, but any oilseed like rapeseed or safflower seed that might have enough dietary fat to start the birds molting.

I suppose my chickens could be the control for this experiment, since I haven't changed their diet at all, no addition or decrease in the amount of fat, and they still began molting at the beginning of fall.
Cj Sloane
pollinator
Posts: 3738
Location: Vermont, off grid for 24 years!
103
I like...

posted 7 years ago
I'm not sure that having feathers falling out due to diet is the same as molting. Is it a "which came first the chicken or the egg" question?

I due have one chicken molting right now, totally unrelated to the BOSS. It's either seasonal or an age issue.

posted 7 years ago
I've been feeding BOSS to my chickens for ages, and know many people who have as well. This is definitely an old wives tale.

His book was the culmination of the previous half century of University poultry nutritional research, tests, and experiments across the country and in Europe. It became a classic text book in most poultry programs.

posted 7 years ago
So, here are the results of my experiment:

It didn't work but perhaps a week and a half isn't long enough? I had dry plucked a turkey 2 weeks early and there was no difference. In fact, it seemed a little harder to yank out those feathers but I was rushed and rapidly losing day light.

I fed them BOSS and apples and the rest they foraged. The Thanksgiving turkey was noticeably juicier and tastier than the one 2 weeks prior but this is probably due to brining the bird. FYI, this was a 8 1/2 lb Royal Palm tom hatched this spring and just perfect for a family of 4 for 1 meal, 1 day of leftovers, and soup.

posted 6 years ago
Sigh......
I did this again this year. Half an hour before going out to do the deed, I thought I'd google up some "dry plucking pages." Eventually, this very thread came up which I had forgotten about.

So, note to future self:
It is worth it to dry pluck if you're doing just one turkey. Plucking while the bird is hanging is a bit easier, giving greater leverage. Pliers are very helpful for the large feathers. Wings are a PIA not matter what.

Cj Verde wrote:
It is worth it to dry pluck if you're doing just one turkey.


Worth it to save heating the water, or do you like the end result better? Curious as all I have done are chickens with scalding or skinning.

Benjamin Sizemore
Posts: 40
Location: Colorado @ 7000 feet. zone negative 87b
posted 6 years ago
What about the high levels of omega 6 in sunflower seeds causing inflammation, which in turn causes feathers to fall out? This is speculation, but inflammatory diets tend to cause a loss of "sheen" in every animal - people included.

My brother recently spent a month in France, where most busy people eat almost nothing but white bread and cheese (and wine and coffee). He said he was a little shocked that a country famous for its food had sort of stopped cooking until the weekend. This was in Paris, not the countryside, so everybody is racing around like they do in cities. Anyway, he noticed the vast majority of men were going bald or already bald. He contrasted this to his trip to China, where he said almost nobody in the countryside was bald, but in the cities, they were.

Wow, Mollison-style tangent, there. My point is that inflammatory diets might cause things like hair and feathers to fall out. Omega 6 is a more inflammatory oil *in susceptible individuals*. This varies by blood type, genetics, etc.
Cj Sloane
pollinator
Posts: 3738
Location: Vermont, off grid for 24 years!
103
I like...

Cj Verde wrote:
It is worth it to dry pluck if you're doing just one turkey.


Worth it to save heating the water, or do you like the end result better? Curious as all I have done are chickens with scalding or skinning.

Worth it to not have to heat the water ... doing that whole set up. Probably harder to pull out feathers but easier to grasp dry feathers. A proper table would make eviserating easier but that was the quickest part of the whole op. 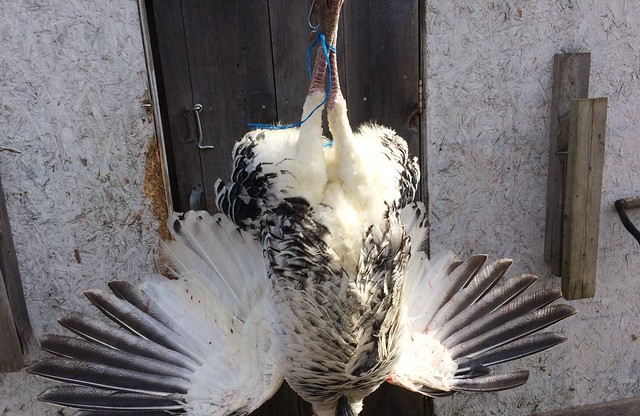 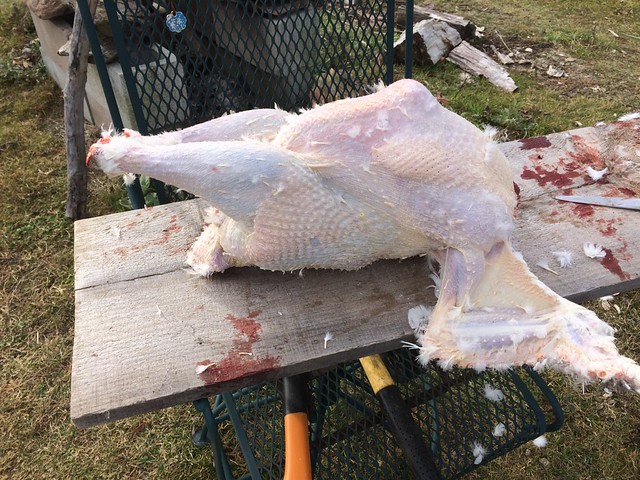 At that point I'm happy with getting out 95% of the feathers. If I can get 95% of the remaining feathers out before brining, that just leaves a few to remove before the bird goes in the oven.