What did I do wrong? 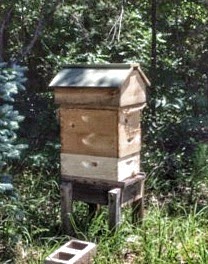 I added another box to the bottom of the Cedar Hive this afternoon. It was an adventure.

I am using a modified Warre style of beekeeping using medium Lang boxes.

I suited up with my bee protective veil, and jacket. I had blue jeans on and some boots. I also have some nice goatskin gloves. I decided since the bees were so friendly in the past, I did not need to smoke them this time. Mistake.

When I got out there, everything was hunky-dory. I removed the telescoping roof with no problem. The bees were not agitated at that point. Next, I attempted to remove the quilt.

The Cedar Hive bees had propolized the bottom of the quilt to the top of the top-bars in the upper box. I loosened the propolis on the edges of the box, but I had to tear away the burlap to remove the quilt. This irritated the bees and some of them began defensive activities. I am talking to them. Trying to reassure my bees that I am their friend.

At this point, the top of the hive was open. I did get a good look inside. It looked like about half of the top box had comb on the top bars, particularly toward the east. The western side had some voids, but I felt that it was just a matter of time before the bees filled it. I decided that I would install the bottom box.

The bottom box (a medium Lang) was equipped with eight top bars and frames that I bought from BeeThinking. I had the box and foundationless frames sitting next to the hive prepped for installation.

I planned to place the hive boxes (see the darker colored boxes above) onto the brick in the foreground. These boxes were full of bees, comb, brood, and honey. I used my hive tool to loosen the bottom of the box, but that agitated the bees. A bunch flew out of the top and began banging into my veil and lighting on my jeans. At that point, I decided maybe I would take the torn quilt to my garage and repair it. Maybe the bees would calm down some while time passed. They let me go.

In the garage, I repaired the quilt by adding another layer of burlap over the torn part. The burlap was fixated with staples. I returned to the hive in about 15 minutes.

The bees were still somewhat defensive, but they had calmed slightly. (Still no smoke.) I lifted off the two bottom boxes. They probably weighed at least 65 pounds. As I strained, I did not notice that I also lifted off the bottom board. I set the two boxes of bees and bottom board on the brick. Oops! I had to put the bottom board on the hive stand before adding the new box. Now, because of my mistake, I had to move the two medium Lang bee boxes again. I decided to set them in the grass. This time the bees really started getting agitated and a lot of bees came out to defend the hive against me.

I took the boxes off the bottom board and probably a hundred bees immediately started trying to sting me through my suit and jeans. It is pretty intimidating for a new beekeeper.

I kept at the work, and placed the bottom board. I put on the new (empty) box with the top bars and frames. Then, I lifted the two medium boxes from the grass onto the top of the new bottom box. My adrenalin was going pretty good by this time and the boxes didn't seem so heavy. (LOL) I was working quickly while 100s of bees attacked, lining up the medium boxes. I got the boxes all in place. Moreover, I don't believe I squished any bees in the process! I replaced the telescoping roof and high-tailed it out of there.

The 100s of bees that had started attacking were still after me. They followed me as I ran across my land. I could hear them buzzing as I ran. The bee escort stuck with me for about fifteen minutes, warning me that they did not like their hive disturbed. One of them got underneath my jacket stung my ass. Ha-ha. Congratulations. Several others stung my legs through the blue jeans, but those were like tiny pin pricks. I am sorry that those bees gave up their life for the hive. (Honey bees die when they sting.)

This Cedar Hive aggression is probably a sign of a very strong hive. Even when I went back out to get the picture above, a couple bees came after me. The Cedar Hive bees are aggressive, but hopefully that aggression will be used to defend their hives against pests and bee predators. I like this wild Cedar Hive.

posted 6 years ago
Thanks for that description!

I've been slightly chagrined that there's nothing for me to do with my Perone hive except take a look through the window. I may remove the cloth that blocks their access to the honey supers soon as there's comb on almost all the topbars. I was probably going to wait for a cold morning before your tale of woe, but now I will definitely wait! That's a plus about cold Vermont mornings - even in the summer it can be a little too cold for the bees to be active.

I have an empty baited Warre hive. I'd like the ability to make splits which would be beyond my skill level (if possible at all) with a Perone.

Posts: 3601
Location: woodland, washington
145
posted 6 years ago
a couple of things occur to me that might have contributed to your trouble. it sounds like you have adapted Warré's quilt (which is great), but you left out the top cloth that would go between the top bars and the quilt. this cloth is treated with wheat paste or some sort of sizing so that the bees don't chew through it and so that it is ready to gently peel off of the hive. that bit of apparatus might have made things easier on you.

if you must have a look inside (to check on progress for choosing when to add boxes, for instance), having a look from underneath is generally both less disruptive to the bees and more illuminating to the beekeeper. it is rather more difficult to see from the top how far down the comb extends than it is from below.

edwin lake
Posts: 44
2
posted 6 years ago
Thank you for the replies. I did not put on the paste you suggest. Good idea.

I also did leave the top open.

I heard Jacqueline freeman say she has a small box between the quilt and the uppermost box. This is not in the Warre design, but it sounds like a good way to avoid repairing quilts, and to facilitate adding boxes. Any insight into the details of the small box until her book is published. What is it's name, dimensions, etc.

Lifting three full medium boxes next spring is going to be strenuous. In hind sight, this is a good reason to stick to the somewhat smaller warre box dimensions.
tel jetson
steward

Posts: 3601
Location: woodland, washington
145
posted 6 years ago
the only box I've seen Jacqueline use between the main hive and the quilt is sometimes referred to as an "eke." I believe she uses it for feeding purposes. I don't feed, so I don't use an eke. pretty simple design: same footprint as your standard box, but much shallower. if you're using Langstroth equipment, you could just use a shallow or medium super. that gives you room to place a contact feeder without having to leave the roof and quilt off.

I've also seen Jacqueline slip a piece of acrylic sheet between the hive and the quilt when she wants to get a look in the top without causing the bees too much grief. never tried it myself, and I imagine the bees would cover it up pretty quickly which would limit its usefulness. sounds simple and gentle enough that it's worth trying out.

Posts: 3601
Location: woodland, washington
145
posted 6 years ago
I forgot to mention something sort of important: smell. the bees' alarm pheromone is often an advance warning that they're getting upset and can prevent setting them off completely if you notice it soon enough. smells like fake banana scent. like banana laffy taffy. if you smell that, consider changing something you're doing or just walk away for a while.

In Paul's podcast Reverence for Bees, Jacqueline said she used the plexiglass sheet only when she opened a hive. She said it helps protect against loss of the atmosphere in the hive to inspect it. Thus, I don't think the bees would have a chance to propalize it.

I believe I might have had some banana taffy smell on my clothes the other day? The reason I say this is that a couple the bees from this hive chased me when I went out to visit a few hours later to take a picture.

edwin lake wrote:
In Paul's podcast Reverence for Bees, Jacqueline said she used the plexiglass sheet only when she opened a hive. She said it helps protect against loss of the atmosphere in the hive to inspect it. Thus, I don't think the bees would have a chance to propalize it.

I just meant that they would cover it with their bodies so that you wouldn't see much.

I believe I might have had some banana taffy smell on my clothes the other day? The reason I say this is that a couple the bees from this hive chased me when I went out to visit a few hours later to take a picture.


Yes indeed thats important to know! I remember a situation, where I had gloves on (light ones, just to keep my fingers clean) and got stung. (They could sting through those light gloves). I continued working, but they more and more got agitated and I got stung again. (maybe three or four times). At last I decided to remove the gloves (which where full with the alarm pheromone) and could continue working on the same hive, without beeing stung again.

So yes, if you got stung, wash your clothes.