Have a look at my design

posted 6 years ago
Top View (I wanted to build an earthship but I'm a one man show and 130 lbs soaking wet so it would take me years to fill all those tires) So this is a round timber bagship.

I'm not sure why the image won't show up full sized here so here's a direct link. http://www.ozarkswebdesign.com/wp-content/uploads/Drawing1.jpg 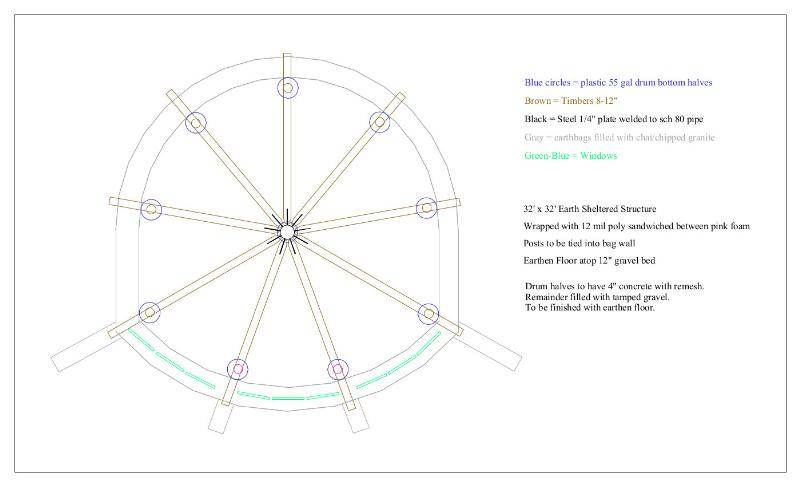 The spokes would be considered joists I suppose and I haven't decided on a roofing system yet. I'm not concerned with that yet.

The drawing is not clear that there is a center pole and doesn't show it but the spokes would have a slot in them and be through bolted to the steel tabs coming off the steel collar that attaches to the center pole. I would probably also either wrap the poles in wire up near the slot or wrap it with a steel collar. I'm a metal fabricator btw.

Floor and foundation for the walls are my first concern and I'm in a fairly wet climate with red clay subsoil. I've almost got it dug down to floor level and am just now hitting the clay which is good I think. This is half dug in and half built up berm and I'll have a good long slope on the back and sides. 20 feet or so. That will be the first line of defense against moisture. Next will be a french drain 2 feet below floor level and the width of the earthbag walls. 20" or so. The floor will be earthen and I'm going to dig down 12" minimum below floor level and fill back in with gravel. Aside from using an old mower with a grader blade for the bulk of the digging so far, the rest is by hand. When filling in the trench drain and floor, I will be starting with 4-5" rock and graduating down to pea sized gravel for laying the earthen floor on.
All the upright posts would be sitting in plastic drums halved with 4-5" of concrete on the bottom reinforced with mesh. I'm using the drums because we've got termites bad here and to guard against moisture. The concrete in them is to spread the weight a bit. There shouldn't be a whole lot of weight on them. I'll fill in around the poles with gravel and the barrels will be set deep enough / cut short enough for the earthen floor to hide them.

I'm thinking I'm going to fill the bags with gravel. River/creek rock. Nice and rounded/smooth as to not puncture the bags. I'll be pinning them with pointed rebar as well as barbed wire so it should be pretty stable. I'm also going to pin the perimeter posts to the wall about 2/3 of the way up. (maybe at 1/3 and 2/3 the way up)This is mostly to hold the posts in place while I put the spokes up. I'm not even sure the upright posts are necessary but I don't like relying on bagged rock. I'm sure I'd need the front posts though and I probably already have enough laying around here from clearing land. Anything straight I saved and the crokked ones are firewood. I'm using rock in the bags as another defense against moisture. I may double bag them or find heavy duty bags. Between the earth and the bags I'll also be using 12mil reinforced poly, sandwiched between pink foam. I can get a good deal on slightly used pink foam around here. Comes from the poultry houses as they are required to replace it regularly. 4'x21' sheets.

Those four wall tabs sticking out the front are buttresses. 9 posts is kind of odd but it's what gave me an adequate number of posts around the back without too many breaking up the front. Spacing at the tips is about 9 foot. I've got lots of 2x10s and 1x12s, 16 foot in length so that will do my ceiling and roof framing. Like I said, I haven't decided on a roof style yet. A simple built up shed roof finished with metal would be easy and a good surface to collect rainwater. A silo style roof also of metal would be pretty neat and is something I'm capable of and would have fun doing except for making the gutters maybe. If I go that way, then the center pole would be taller and a second set of spokes as rafters would be used. A separate small roof elevated at the center would be necessary and could double as an attic venting system. I would have to have custom metal bent up for standing seam but it would make closing in at the to of the walls easier than a shed roof.

Right now I'm just working out the floor and walls and thought I'd get people's opinions here.

posted 6 years ago
Bumping while it's still the weekend.
Upon further thought, I don't like filling the bags with gravel. If they ever degrade, the wall would crumble. Now I'm thinking of two rows of bags. The outer row having gravel, the inner having a good soil mix. Found some poly bags that are 12"x45" so total wall wouldn't be much thicker. Two rows of bags would be tied together with barbed wire.I could just run the barbed wire in a zig zag pattern so it jumps back and forth between the rows. That way if the bags degrade, the gravel filled bags are trapped between the soil filled bags and the undisturbed earth along with the poly sheeting and foam insulation.