Dacian Todea
Posts: 35
posted 6 years ago
I moved OffGrid almost two years ago (it will be two years this spring).

I needed an inexpensive but reliable solar power for my house. My first priority was to have everything in the house as energy efficient as possible so that I will not need much energy to start with.

My energy consumption is an average of 80kWh/month but can be as low as 60kWh in the two winter months with less solar November and December and as high as 90kWh. 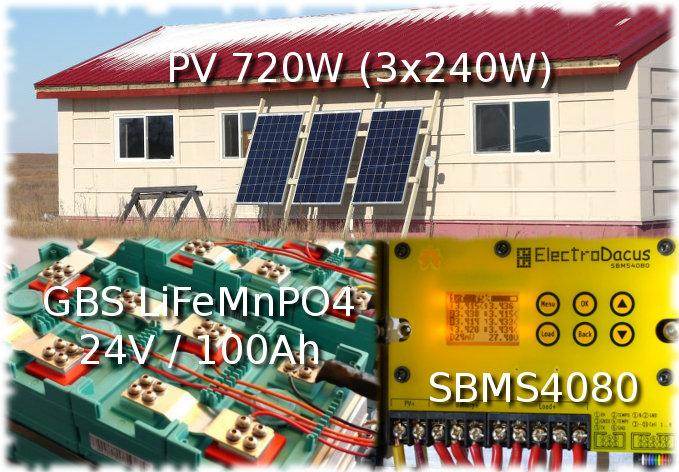 TrippLite PV2400FC inverter that is used only about one hour per day for devices that can not work directly on DC, most do but for cooking appliances and some other occasionally used appliances like hair dryer or vacuum cleaner. ($500) I got mine for a bit less used from eBay but any other 24V DC to AC will work.

Battery is 3 years old but almost two year full use already and I do not see any capacity loss but I will do an exact measurement in the spring to see what it is (I expect under 4 or 5%) so it should last at least 10 to 12 year not the best LiFePO4 there are better options now look at Winston mine is made by GBS.

PV will last at least 25 years same for Solar BMS and probably inverter since is used at most just one hour per day. The PV support may need also a replacement during the life of the panes since is made from wood painted but not sure how much it will last (it looks excellent for now)

This 16 cent/kWh is better than what I was paying before in a rented apartment where it was about 11cent/kWh but total bill for 250kWh was $50 so about 20 cent /kWh including all the taxes and fixed costs.

This should be able to scale for larger energy consumption for a larger house. The new Solar BMS will support 3kW PV array so up to around 300kWh/month possible with that. 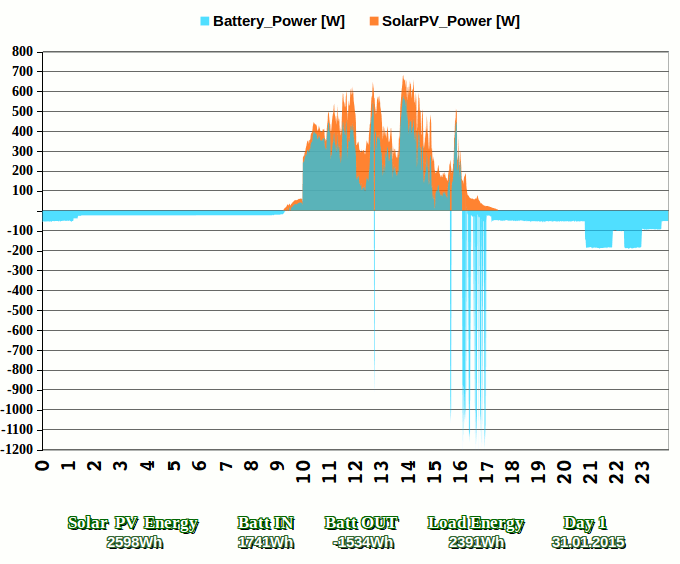 The energy consumption for the 7 days has big variations from as little as 1.132kWh to as much as 4.822kWh with an daily average of around 2.7kWh and around 80kWh/month energy use if I where to extrapolate this 7 days. This is normal for February since days are already longer and less cloudy than December in my geographic area (Canada, Saskatchewan closest large city is Regina). In November and December my power consumption can drop to 60kWh/month and in spring summer it can get as high as 90 to even 100kWh/month it will depend on how much cooking we do.
Before getting in to details about my loads I will do a short explanations to the power graph by day.
Day 1 (at about 10:00 there is a sharp increase in power that is do to the fact that I cleaned the panels of snow, at about 12:40 or so there is a short 2.5 minute increase in power consumption that was form the microwave reheating some food and you see that pulse at about -900W but the total power consumption is that + the solar PV power at that moment about 500W so the total load was 1400W from the DC side. Then later that day 15:30 we made a bread with the small convection oven and since that has a thermostat you see many on / off cycles to keep the set temperature. Then even later after the sunset around 20:30 I used the propane heater that has 3 pumps that work at different stages and all combined get to about 130W + the base load that was around 50W you see a peak of around 180W).
Day 2 (About the same as first day some cooking with the convection oven and the water pumps from the heater during the day and a bit after sunset).
Day 3 (No cooking so just DC loads mostly the water pumps for heating and you notice around 14:30 the battery was full but you will see this better in day 6)
Day 4 (There was again a bit of snow on the panels in the morning and again the battery was full at around 14:30 even if we done some cooking).
Day 5 (This was a full sunny day and I done quite a bit off cooking and the water pumps where running all day plus I used my larger computer not the laptop that is why you see higher power consumption after sunset).
Day 6 (There where some clouds in the morning then I run the water pumps from the heater. The battery was fully charged by about 12:00 and the water pumps where running for another hour you see more often PV connected and disconnected do to larger load then when went shopping all day so only the small base load was on the refrigerator and one of the pumps at low setting. So all that is a good example of unused solar energy because it was not needed and this is normal in OffGrid situations since you can not sell the excess power. Once I will do my electric house heating with solar PV panels all that extra energy will be used to heat the house in winter but I will still need to find a use for extra energy in summer).
Day 7 (This is the lowest solar PV production but it could have been even lower there where portion of the day where you where able to see where the sun is. If it was one of those days the power will have been always below 100W mark and the production will have been as low as 0.3kWh).

Even if this is Canada and you may expect low solar output it is not. As a comparison I get about the same amount of solar energy average over a year as in Sydney Australia. If you want to know how that compares to your location check out this great on-line calculator PVWatts for direct comparison with my location select Canada (SA Regina).
I will love to answer any questions you may have.