Moringa Oleifera aka Drumstick tree and spacing it for agroforestry?

It gets ridiculously hot and dry during the summer months out in south Texas, (zone 8a/8b) and I've read about farmers in other parts of the world planting Moringa trees in their gardens and fields to bring up moisture and minerals, and to provide shade to garden plants but its usually only one or two trees. I changed my garden over from tilling and endless weeding to a no-till garden where I smother the weeds out with just about anything I can get my hands on, so no tiller to hit roots with. No-till is so much easier and superior. Water conservation is also a big factor because trying to grow stuff in summer months is unlikely to be sustainable on a water well without support. Even with drip tape but with a thick layer of grass over everything, it really cuts down losing the water to evaporation, shade would enhance this quite a bit. If nothing else works, I might just have to run a potted plant garden under the shade oaks from July to september, raspberries excluded.

Enough about no till and back to the trees. I want to know the ideal distance to space these trees since I can let them grow 30-40ft high or cut them back and make them dwarf trees for closer spacing and easy maintenance. They will be planted in rows with about six different varieties of raspberries and many other annuals. I want the trees to shade the garden in the summer time, maybe let one tree in the center grow 40Ft and keep the surrounding trees under 14ft. Apparently this farming method is all called "Agroforestry" where people plant much like a double or triple canopy jungle. I think it may be the ticket to reducing the amount of watering time down to 1-2 hours.

I have about three pecan trees (thank the dog and his antics) and an avocado tree sprouting in the garden that I plan on allowing to either fully grow or keep dwarfed. Does anyone here have some insight into theses method of farming or tree spacing in a large garden or even field? I foresee large shade trees quickly becoming invaluable for privacy with all the eyes in the sky!
Steve Farmer
Posts: 571
Location: South Tenerife, Canary Islands (Spain)
7
I like...

posted 5 years ago
My practical experience of Moringas is limited to the picture below, but I've spent a lot of time researching. I understand you can plant them how you like, according to how often you want to harvest them. many per sq metre if you're going to keep them low and prune often, further apart if they are going to be allowed to get tall. Seeing as they are cheap and easy to grow I'd suggest planting them closely spaced and thinning them out as you see how they grow.
20150806_203913.jpg 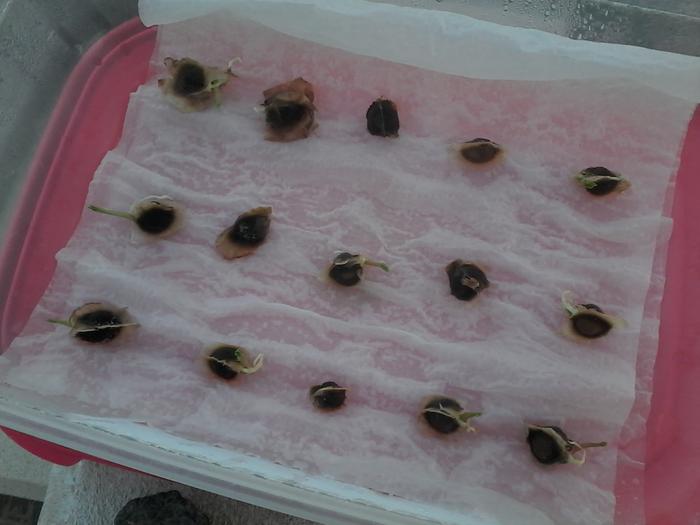 Druce Batstone
Posts: 58
9
posted 5 years ago
I have a row of moringa spaced about one meter apart. This is a living trellis for lablab beans (called "poor man's beans" locally). I have read that moringa can be planted very closely and harvested regularly for very high biomass yields in wet tropical climates. This year, I saw a very large (10m high at least) individual tree in a suburban garden in Karachi. Based on these observations, you could do pretty much anything you like with moringa in an agroforestry setting.

However I would be wary of the claimed attributes of moisture harvesting. My trees require regular watering. The roots are not really invasive but spread out and are very evident in the hugel bed that I created alongside the row of moringa. The branches are not very strong. The weight of the lablab bean vine has pulled down all of the higher branches in the row of moringa. The shade value is also doubtful.

Try moringa by all means - there is a place for it in your situation but do not invest all your efforts in moringa alone.
Nic Foro
Posts: 35
1
posted 5 years ago
It seems spacing them 8Ft apart (~3m) and keeping them just high enough to walk under the branches would be a good starting point. I don't want them to shade out the garden like a Southern live oak would, that would be way too much shade for any time other than June-September, rather enough shade to take the edge out of the heat and sunlight. It hit 103.3 today, the same is expected tomorrow and its much hotter in direct sunlight. This kind of heat, especially without non-stop watering is just bad for business, production essentially halts. One of my heritage plants is putting fruit out early and its all bitter garbage, the spring crop was much better! The rows are for raspberries so I can't keep the trees too close or there won't be room! I'm I can get the local garden temperature down to at least the mid 90s during the summer months.

As for water requirements, they are supposed to be very drought tolerant but I think there are more tolerant varieties than Oleifera..

They are very fast growers so they should be big enough by next year. I just threw the rest of my seeds in water and I'll start them on paper towels this time so I can plant them one to a pot.
Mark Reese
Posts: 7
posted 4 years ago
Nic,

Wondering if you decided on spacing for your Moringa trees yet? I have planted a over a thousand Moringa trees this year but did most of mine in an intensive planting. This video shows what the bed looks like after 1 season . Of course sounds like you want to space your trees out more like shown below. Traditional spacing for leaf production is 2.5 ft (0.75 m) within rows and 3 ft (1 m) between row and for seed pod production the recommended spacing is 8.2 ft x 8.2 ft (2.5 m x 2.5 m). I would think your idea of 3m apart sounds perfect! Check out this page on my website for growing moringa if you would like: How to Grow Moringa Trees. I'll be adding a lot more content to it in the near future.

Happy planting and I would love to hear an update from how this goes!
Mark 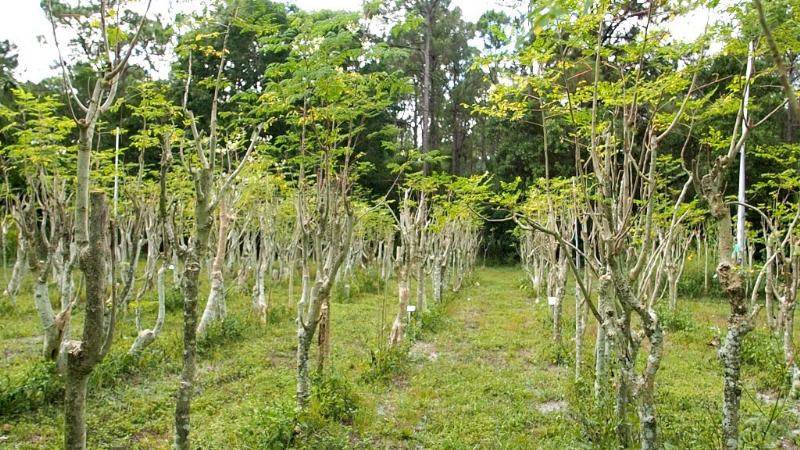 Nic Foro
Posts: 35
1
posted 4 years ago
I planted them about 8' apart. All my trees are currently frozen back to little green stems but the winter has been unusually warm so they should be fine. I packed a bunch of grass up around them to keep the frost off. Its 75*F in central Texas and I'm sweating in the middle of December. My largest tree looks like its dying from the top down (damaged) stem, etc. If It continues to rot from the top I'll lop it off and burn the end to see if it can be saved. If I find 8' is too spaced out then I can always plant more.

I unfortunately don't have any good pictures showing them all lined up but every 4-5 rows I planted the Moringas every 8', I'll probably let them get to 10-12' tall before trying to train them to branch out more.

https://www.dropbox.com/s/7dxs90dpb23j4nw/IMG_20151021_104951_657.jpg?dl=0 Dog picture, but it shows about four of the trees and how they are setup, they are planted in the rows like anything else. I'll have clear pictures around March when I have all my seedlings planted, a second garden setup, and my failed newspaper experiment cleaned up.

https://www.dropbox.com/s/hnf4qv1e3uz7kr2/SMMT.jpg?dl=0 Red dots indicate trees (1-3ft at the time since they were planted late!) I had lined a lot of my walk ways with news paper to help control weeds and keep the sun from scorching the ground, it worked great up until the wind blew the paper everywhere! I almost have it all rounded up and composted! Now I stick exclusively to large piece of cardboard, grass, wood chips, and scraping up forest dirt out of the wooded areas I'm clearing.
Nic Foro
Posts: 35
1
posted 4 years ago
I know the topic is nearing a year old but I've been waiting a good while now to give a better update on my agro-forestry experiments. Nearly all of the trees have come back from winter, about half were late coming out of dormancy and ended up only growing ~3Ft while the early returns have grown 13-15Feet. They do not provide much in the way of shade due to spacing but each year they should reduce the amount of water lost to evaporation and the intensity of the sunlight more and more. I need to remove the power-line over my garden since the trees will interfere with it by next year, the small water well will be on solar by spring... I hope. They survived the ridiculous flood back in April, lost my dog fence, hugelkultur bed, etc, to it.

The trees are very fragile so I'm wondering how a full grown tree will hold up to storms. I need to invest in a good contractors ladder so I can keep the tops cut off, I can't really pull the trees over and pinch them anymore without the risk of breaking the plant. The ones I haven't really been pinching branches off of have flowers on them so we will see where that goes. Pinching the branches and tops off the trees seems to stop the trees from flowering.

I bought some Banana spouts back in spring, Gold Finger, and something I don't recall, and they have grown so well in my area that I'm going to run another agro-forestry experiment with them. The banana plants have been very easy to trim up since its moving into fall/winter, wind damage and a little edge rust on old leaves are the only problems they seem to have here in Texas (8b). One plant casts a good shadow and I'm thinking they will work great for controlled shade if planted in a row. Commercial spacing seems to be 8-12Ft but I may space 12-14 so the plants have extra room to grow root mats. Its 15-20Ft down to water and the soil is very sandy, I've spread about three hay bales between my two gardens and the sandy dirt just disintegrates it! Even wood chips vanish after 1-2 years!

So far nothing seems to be hurting for nutrients under and around the two trees I have right now but I'm also mulching with old Johnson grass(cattle hay), leaves, wood chips, grass clippings, rotten oak bark, worm casting / seed mix, and anything else I can get my hands on. No, I don't have any problems with Johnson grass taking over, when I find it sprouting I pull it up and compost it. The hay is so old most of the seeds aren't viable anymore anyway and the ones that are viable are buried under the mulch.

I have around a dozen Dwarf Moringas in my little greenhouse there to the left (out of view) that I can plant between the banana plants if shade is inadequate due to required spacing. The flood also washed a Moringa root off to the end of my other garden and its growing, otherwise I planted it there when I dumped a pot out or something and I don't recall. Also pictured, my first banana sucker that, so far, hasn't rotted, its even growing a new leaf! Gold finger!

All the news paper is cleaned up, no intentions of trying that again! Sorry for all the broken links, I kinda deleted the pictures from my dropbox, HA!.

I'm also removing my raspberry cabling except for the end row and going back to hog/cattle panels, they worked significantly better. The new cable setup will be on the end posts so I can drape shade cloth over until my Moringa trees get bigger. I'm expecting they will freeze back every year.
IMG_20161115_164705_247_174eposure.jpg 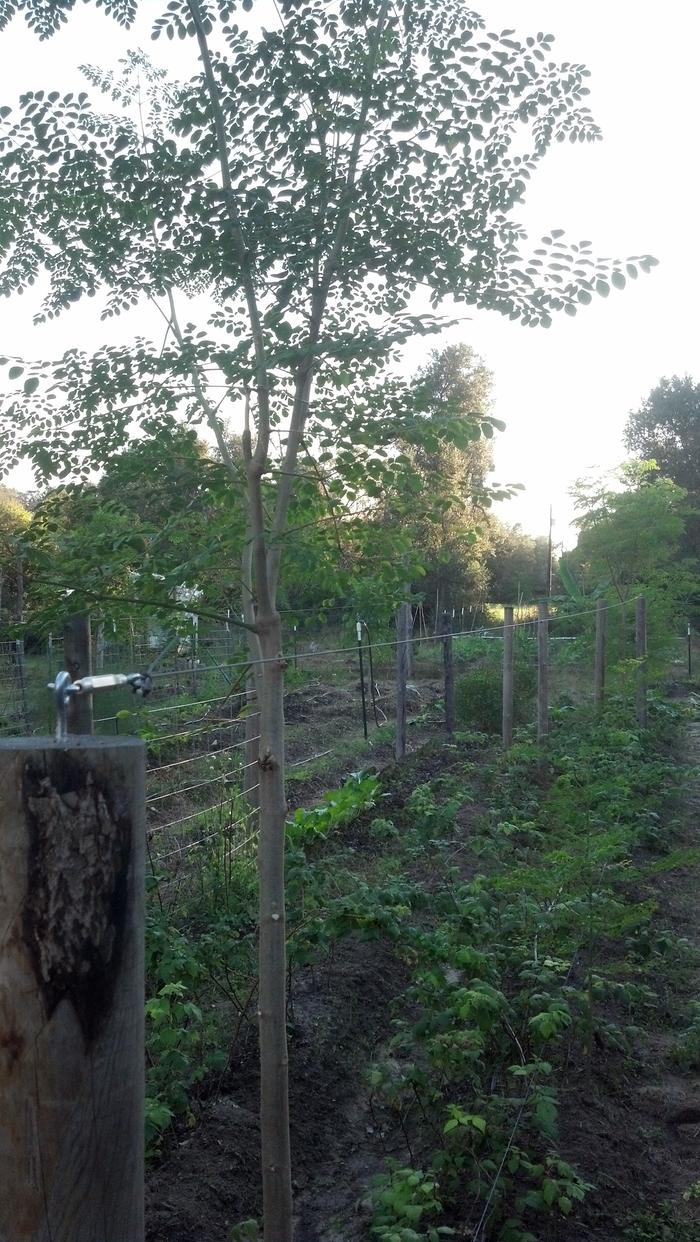 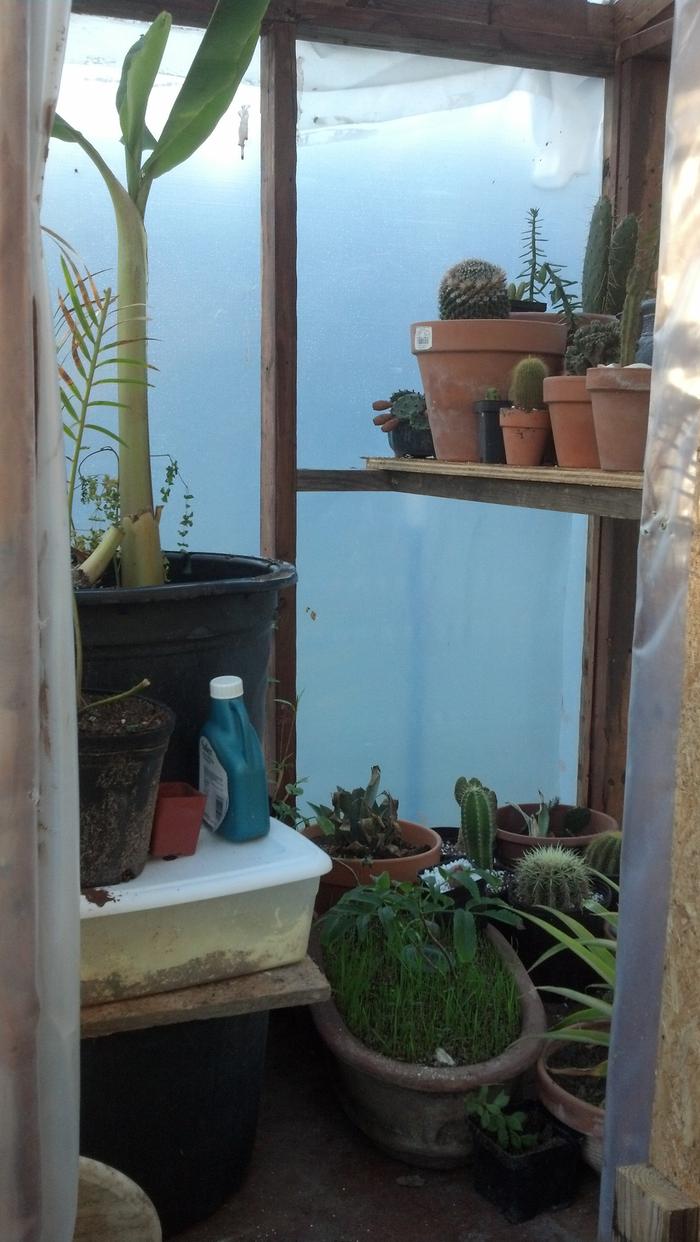