Kieran Chapman
Posts: 37
Location: detroit, mi
1
posted 6 years ago
Hi there, just thought I'd post some pictures and mention an ongoing project in my kitchen. I'm doubling up the insulation in the walls and sealing with a clay plaster over wood lath. All of the walls in my house had little to no insulation, and what was there was mostly bunched up fiberglass that had slumped, fallen, and disintegrated over the years. I'm far from a professional, so take nothing as gospel, but this is just one way I've found of reliably insulating and sealing a wall without buying too much in the way of box store products.

To rectify this issue and make my home more comfortable I have been tearing down the drywall (potentially you could leave it up if there was already decent insulation and you weren't worried about problems inside the wall), removing what insulation is there, and reinstalling mineral wool insulation. I love the stuff. Easy to cut, easy to install, almost no cons except the embodied energy. That's relatively low though since it's a byproduct of the slag from foundries, etc. It's not quite as nice as dense pack cellulose, but there's nowhere near me to rent a high-pressure blowing machine, so I don't mind this stuff. To eliminate thermal bridging and add extra insulation I have been building 2x4 and 2x3 interior stud walls, set about a 1/4-1/2" in from the original walls (running new wiring is a breeze since you can bring them down between the two walls, and just secure the cables to the front of the original studs).

I do lose about 5 inches whenever I do this, but it's usually not too noticeable. I've also done light straw clay for insulation, but the depth you need to really get significant insulation is too extensive to be expanding inwards into your house. On another wall in the house I'm planning on building outwards rather than inwards, and for that I will be able to use straw-clay since I can extend more significantly. This is off-topic, but does anyone have any ideas on a foundation for an exterior insulation wrap? I could use some kind of truss, but it will be holding fairly significant weight so I was thinking some kind of rubble trench and stacked stone foundation up agains the original house foundation... that's neither here nor there.

Once I get all of that up I come across the front with lath. The lath is just long strips I get from a local mill when they're ripping/planing excess off a long boards. Most of it is rough on one side, and it varies from 1/8" to 1/2" thick. This I install with some finishing nails across the front of the insulation.

Once finished, I go over the whole thing with a spray bottle, and then trowel on some clay-sand plaster. (N.B. no vapor barrier, and the clay seals to form your interior air barrier) The plaster a mixture made with subsoil/fill-dirt from around my area, plus some roughly chopped straw. (I'd like to incorporate manure but all i have access to is chicken and goat shit, neither of which has many microfibers from what I understand.) It's about what you'd see in a cob mix 3:1 or 2:1 clay soil to sand depending on the soil's clay content. It goes on nice and wet so that it squeezes into the spaces between the lath and forms a good key. After a night or so I score it with a sharp piece of lath in a cross hatch pattern like you see on the south wall in the pictures. Those grooves help the next coat adhere better.

The drywall patches on the ceiling are from a soffit I removed. They're insulated but not taped and sealed yet. I just use gypsum plaster for that. The round post and beams were a practice thing I was doing with hewing my own wood. Only the non-exposed sides are flat. One i did with an axe on three sides, but the other I just did with a friend's chainsaw mill since I don't have most of the tools required so I was just using a singular sharp axe and it takes a good bit unless you have a good broadaxe and other accoutrements. They come from a little black walnut that was growing into a power line and they form the main support beam for a potential loft I may put in the attic someday.

The windows I salvaged from two houses that were coming down. Cutting them out meant I lost the nailing fin though, so their flashing on the outside isn't perfect but it should stop most bulk water infiltration, just staples, building paper, and metal flashing. I haven't installed the extension jams yet, since we haven't decided on counters or anything like that, but I was considering doing tile. They're actually installed in plywood boxes that tie the exterior and interior walls together since it's easier to seal between the two walls that way. The windows themselves I still had to spray foam around though as you can see. Any permies have a good way to install windows that doesn't rely on spray foam around the shims? I'd like to seal them some other way, but that's all I know.

That's about it. I'm installing shelves soon so I can move all my dishes back out of the guest bedroom. I was going to do them floating and dowel them into the studs or something, but I've got too much other stuff to do so I'm just installing them with brackets, whatever.

When I put up the finish plaster and build the counters I'll update with some less shitty pictures.
CAM00817.jpg 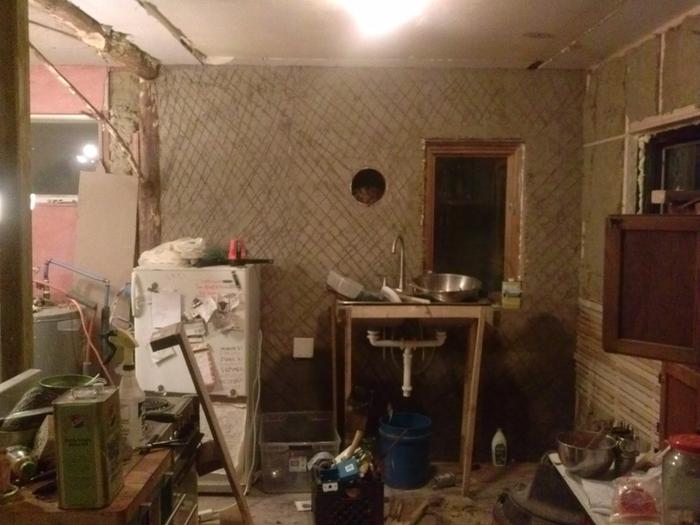 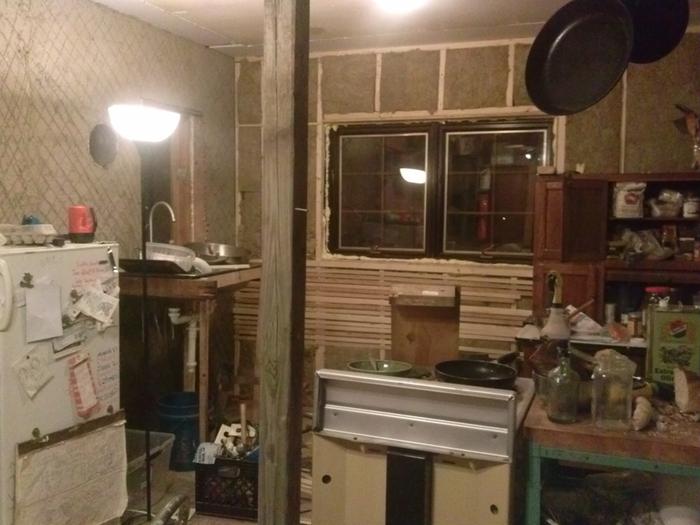 Julia Diamond
Posts: 6
posted 6 years ago
Hi kieran, where do you get your mineral insulation? I think I read somewhere that you are in Detroit (like me). Do you know of a green building supply around here? Thanks, julia
Kieran Chapman
Posts: 37
Location: detroit, mi
1
posted 6 years ago
A couple Home Depot's stock it in a small section next to their fiberglass insulation.