Dirt! the movie by Bill Benenson 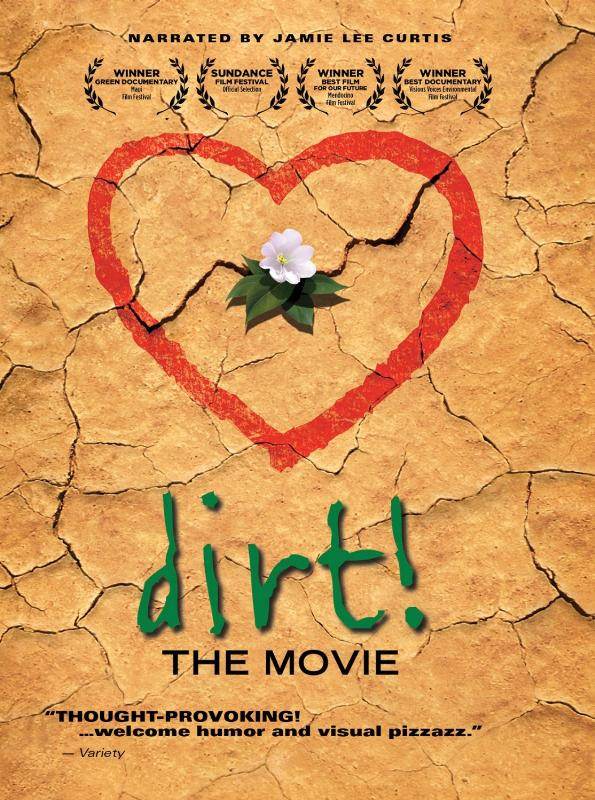 
Floods, drought, climate change, and even war are all directly related to the fate of humble dirt. Made from the same elements as stars, plants, and human beings, dirt is very much alive. One teaspoon of dirt contains a billion organisms working in balance to sustain a series of complex, thriving communities that are invisibly a part of our daily lives. DIRT! The Movie tells the story of Earth’s most valuable and underappreciated source of fertility — from its miraculous beginning to its tragic degradation. This insightful and timely film tells the story of the glorious and unappreciated material beneath our feet.
Narrated by Jaimie Lee Curtis and inspired by William Bryant Logan’s acclaimed book Dirt: The Ecstatic Skin of the Earth, DIRT! The Movie introduces viewers to dirt’s fascinating history. Four billion years of evolution have created the dirt that recycles our water, gives us food, and provides us with shelter. But humanity has endangered this vital living resource with destructive methods of agriculture, mining practices, and urban development, with catastrophic results: mass starvation, drought, and global warming.
The filmmakers travel around the world to capture the stories of global visionaries who are discovering new ways to repair humanity’s relationship with soil, checking in with Dr. Vandana Shiva to discuss her fight to prevent world hunger by preserving biodiversity in India, and documenting the tree planting work of renowned photographer Sebastião Salgado and his wife Lélia in Brazil. From farmers rediscovering sustainable agriculture and scientists discovering connections with soil to inmates learning job skills in a prison horticulture program and children eating from edible schoolyards, DIRT! The Movie brings to life the environmental, economic, social, and political importance of soil and suggests ways we can create new possibilities for all life on Earth.From dirt the movie.pbs.org

podcast 018 review of Dirt! the movie and desert polyculture

Leora Laforge
pollinator
Posts: 154
Location: Saskatchewan
38
posted 4 years ago
I watched this movie in a high school biology class years ago, I loved it, most of my classmates wondered what was wrong with me. It is a great thing to find like minded people.