posted 4 years ago
I ran into this video, and was immediately jealous:  https://www.youtube.com/watch?v=KZbuNU0pB0M

I have finally found a funnel large enough to do the job.   https://www.amazon.com/gp/product/B00498ABXU/   This funnel is comparable in size of a 5-gallon bucket.

Anyway, now I am in the market for those ruined straw bales that have sat out all winter and are begging to be composted.   I plan to shove a pipe into the center of the bale and tie the funnel onto the opening. 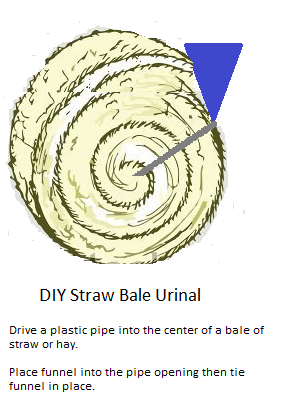 I love that picture of 5 guys just standing out there in the field, taking a leak on the straw-bail urinal while the concert is going on in the background.  Apparently there is no need for a privacy screen or anything -- just pee away.

The brilliance of their system is that those urinals look like they can be punched right into any straw bale.  It looks like they've got some sort of strapping tied around the top of the bale to hold the tops of the urinals in place.  You could easily adapt this to square bales -- not just a huge round bale.  If you did it with square bales, they would be: A) easier to move, B) easier to build little stalls with, and C) more quickly saturated.  I can't imagine how many pissers it would take to adequately saturate a 1000 lb. bale.  But a small rectangular bale would weigh anywhere from 30 lbs. (for straw) to 110 lbs. (for green hay), so after 100 pees or so, they would be well-saturated.  Let them dry for a couple of days, and then you could pick them up and move them to their final location.

BUT . . . going further --- your idea of a funnel and tubing takes the concept to a new level of flexibility.  Now you are no longer tied to bringing in straw bales.  If there is any sort of slope to your location, you could set up a pee station and a long hose that directs the urine downhill wherever you wish it to go in your orchard.  The pee station remains stationary, but you could move the end of the hose to whatever tree, compost pile, or swale that is located downhill.  Instant nitrogen delivery system.

I live in a suburban neighborhood so I do most of my peeing outdoors under cover of darkness, or I have to be careful who might have a view of my socially unacceptable fertilizing strategy.  But with a couple of pallets, a funnel and a length of old garden hose, it would be easy enough to build a semi-private stall.  I could build it as a portable trellis and plant pole beans or some other climber to cover it for me.  One $1 package of pole bean seeds would last years.

One note: being a pointer (not a setter), a funnel might not be a very good thing to pee into.  Splash-back has to be taken into consideration.  That's why the shape of those urinals are the way they are.  Guys don't want to go up there and be all careful about their business -- they just want to let it fly and be done with it.  So take that into consideration.  If you've got to stand there and be careful not to splash back onto your shoes or knees or something, it's not well designed.  Plus, the height of every guys is different, so the urinal should take into consideration a guy who is 6' 3" tall, or a child that may be 4 feet tall.  I'm sure there are engineers on this site that can weigh in on optimal design specifications for minimal splash-back.

Have you ever seen those stainless steel urinals that they have in public park restrooms?  I see them all the time here in California -- at the beach restrooms or in our local public park.  Basically, they are vandalism proof and indestructible.  They look like something out of a jail cell.  If you could get one of those from a salvage yard, that would be perfect.  They are the right shape, would never corrode or fall apart, and could be modified to attach a hose with a quick clamp so you could easily disassemble it and move it to a new location every so often.  Now I'm going to be on the lookout for one the next time I'm at the salvage yard.


Now . . .I look forward to the discussion that will follow in this thread!  :>)

posted 4 years ago
Hmmm...   Might be a way to handle the pee from an indoor location.   Just plumb to it instead of a container.   Easier in my case since my mobile home is set about 3' higher than the ground outside.   Just use a funnel inside a 5-gallon bucket, plumb to the bale?

That way women can contribute too.

posted 4 years ago
I suppose that in Maryland, you'd have to contend with the winter cold.

A good composting toilet has a pee diverter, making it easier to deal with the two different wastes being deposited.  But if you had one indoor system for pee and a second for "solid waste", it might be a bit frustrating and space wasting.  "I think I've just got to pee . . . no   . . .. wait  . . .I've got other business to do while I'm here.  Now I've got to stand up and move over to the other system."

Grey water system enthusiasts would say that you should just pee in the shower -- it all goes out to the petunias together.  But if you wanted that concentrated nitrogen directed to a specific location, something more tightly focused is needed.

posted 4 years ago
I am thinking that the straw bale in winter is going to work better than what I am doing now.   In the summer, my pee goes into a rain barrel that is gravity fed to a garden that is about 20' away.   I have to stop using the rain barrel towards the end of August.  Water in the lines or barrel would freeze and ruin things.  So after August, pee then goes into a 5-gallon bucket that, well, turns into ammonia by the time I use it in the garden.   Where I live we have 3 months of bugs, 9 months of cold.

I am thinking of parking a bale on a wheelbarrow outside of my mobile home.   Shoving a funnel with pipe in it.   Then having a pvc pipe above that pokes out of my wall and drains the pee bucket into the bale.   Come spring, roll the whole thing to my hugelkulture (future tense here - not here yet).  This way, I do not lose one drop of pee in the winter, but am not dealing with containers of pee either.

I have drawn below what I plan to do.   The drawn setup is heavily weighted towards the needs of females vs. males.   Men can just use the urinal.
HayBaleUrinal-Winter.png 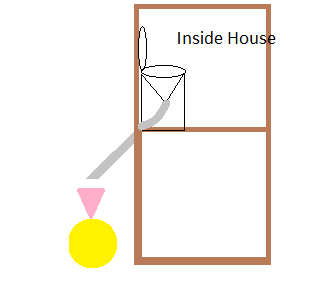