Has anybody here ever managed to overwinter pepper plants outdoors in zone 7b?  I'm growing in that zone right now and would really like to get these to survive the winter into next year.  I've heard of this being perennial peppers being common in warmer areas, but am yet to hear of anybody overwintering them outdoors in this zone.  I know that they won't stand a chance if no precautions are taken prior to any freezing temperatures coming through.

I've thought about pruning the plants back in hopes that it may send the plant into dormancy until spring.  I have hoop house poly film that I am hoping to support with a bamboo structure over the pruned and thickly mulched peppers during the coldest months.

I don't have any major evidence to believe that pruning the plants back will help them survive cold temperatures, but logically I am thinking that removing all of the foliage from the plant will require less energy for the plant to survive.  Also, I did prune several of them after a major flood this year and it seemed to save several drowning plants from dying so I believe it's worth a shot.


Essentially, I'm just trying to see if anybody has experience overwintering peppers in climates that are not exceptionally warm.  That is, without transplanting them and bringing them indoors.  I'm trying pruning, mulching, and making a small hoophouse over them...if anybody has any other suggestions I'd be glad to hear them.  This is very much just an experiment for me and I really don' t know what to expect and whether or not it is a realistic goal.
Charli Wilson
pollinator
Posts: 513
Location: Derbyshire, UK
96
I like...

posted 4 years ago
I have overwintered chilli plants in zone 8, by chopping then back and bringing them indoors to live in a cool room. Only had about a 50% success because the cool room didn't really work out cool enough (about 15C), with not very good light. The ones that did make it survived, just, but spent most of the following summer recovering rather than producing fruit earlier than my new seedlings and giving me a bumper harvest.

This year I've got my citrus, peppers and chillis in a styrofoam and bubblewrap 'mini-hoophouse' structure, inside a glass greenhouse. As recommended to me in this topic: https://permies.com/t/59613/Overwintering-citrus-plants
I intend to eventually put some christmas lights in the hoophouse on a thermostat to come on if it gets really cold, but the temperature hasn't dropped that much here yet.
Joshua Blythe
Posts: 2
posted 4 years ago
Wow the christmas lights sound like a cool idea...I've never heard of that.  Unfortunately bringing any of these plants indoors is not an option, so they are going to have to do their best in the ground.  Might be worth it to trying wrapping light strands around the bamboo supports for the tiny hoophouse and see how that affects night temperatures inside the poly film.
Alex Ames
Posts: 415
Location: Georgia
16
posted 4 years ago
I am "fooling" around with the same thing. I have had success potting them up and putting them in my garage. I had one for 3 years and it got massive. The 3rd year was not very productive. This makeshift cover may extend my season some but I don't expect to have the peppers over winter.
image.jpeg 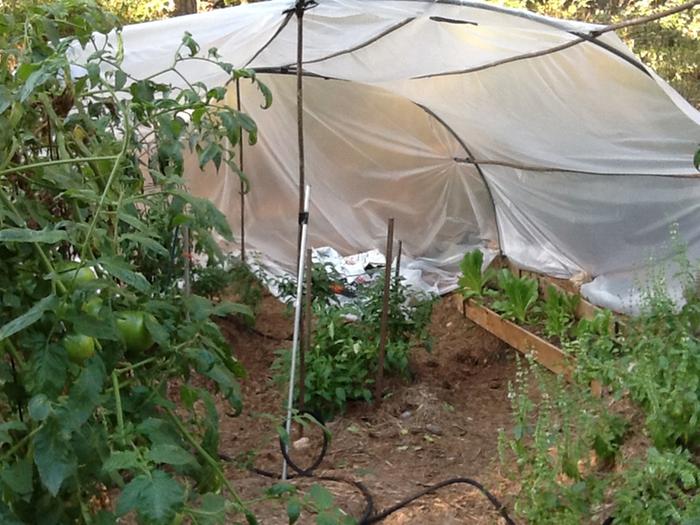 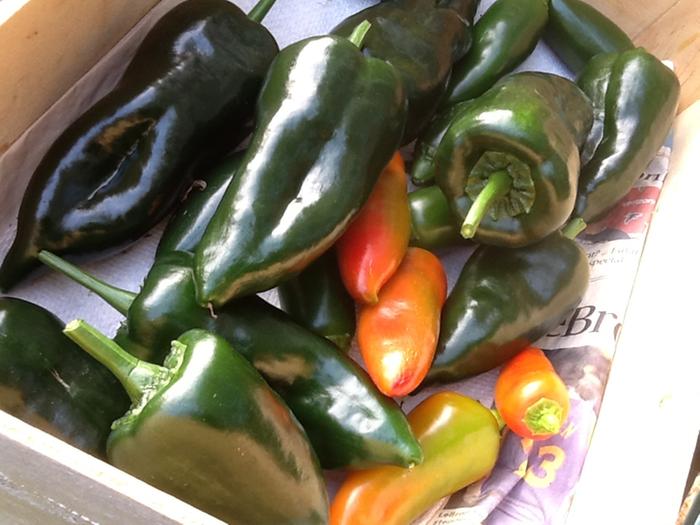 Posts: 3663
Location: woodland, washington
168
posted 4 years ago
Capsicum pubescens cultivars are often hardier to a few degrees cooler than C. frutescens, annuum, or baccatum, but they still can't tolerate more than very brief frost. they also live longer than other capsicums. they're delicious and have a great, smooth texture that reminds me a little bit of papaya, if a papaya were spicy as fuck.

C Jones
Posts: 89
4
4
posted 4 years ago
A friend of mine in zone 7ish had good success protecting tomatoes from early/late frosts by stacking some spilt firewood rules by the plants. The added thermal mass kept things warmer and probably protected from the wind.

How much that would help depends on local factors like sunshine, length and depth of winter, etc.

posted 4 years ago
I am in 6b and have taken peppers indoors for the winter. Under 6500k fluorescents. An Ancho and a Jalapeno, were in fruit and I brought them in in late October. The crop ripened out in December, they bloomed, I played bee, and they ripened out in April. I played bee again and they ripened that crop outside (put them out late May) throughout the summer, going into full production again after going out (blooms and fruit at same time). They made it through five years and I retired them as production had dropped off, they'd turned into a woody bush, and they were too large to come in again. I will start more this winter. Despite everything I do to extend season I consider those tender tropicals. Some varieties will overwinter in northern Mexico. (aka about 9b). If you can do stuff to boost the microclime they are in some varieties may make it over winter.

I have friends in FINLAND who overwinter theirs and get 3-5 seasons off one. They get pretty sickly during their winter but once the warm sunny weather arrives again and they go out on the deck or patio, the plants go lush again.
Hans Quistorff
gardener

posted 4 years ago
You might make a V of two hay or straw bails to hold the plastic. put the point of the V north for maximum sun light. bury the plastic on the open end with dry mulch under it to make a thermal break to keep the soil warm.  Use some thing for weights on top of the bales and fold back the plastic at the point of the V proportionate to the sun and outside temperature for ventilation.

I have my peppers and tomatoes in wicking barrels so that I can move them around. I am still harvesting in the greenhouse but I will need to move them farther from the windows and put a heat lamp on during hard freeze.  We usually get one week in December and another in January.

posted 4 years ago
Christmas lights to protect plants during freezes is a very popular technique in my area. I over wintered a pepper plant here (mind you in 8B) last year with lights and a thermal row cover. I wouldn't suggest pruning the plant, often that induces fresh growth which would be more frost tender.

You might consider a thick mulch with incomplete compost. If the compost is still breaking down it will be creating a small amount of heat that will help protect the roots. That's the biggest thing. Keep the roots from freezing. You stand a good chance of having the plant grow new branches in spring, to replace any winter damage.