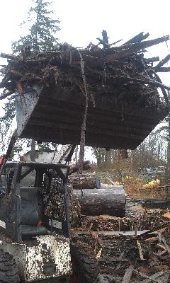 --- A NEW BUILDING SYSTEM IS BORN --- This is the system I'll build my walls with, once approved.
Wow, brilliant idea! Cedar is a fantastic resource. We can get fir mill waste here and use it for siding/fences, etc. I look forward to hearing more about this system.
"Professional Scrounge" .....that is totally what I want to be when I grow up. Scrounging is SO much fun! Free is fabulous.
show more
10 years ago
natural building
Felinure--how to compost kitty poop?
I use "Feline pine" pelletized sawdust cat litter. When I lived in a van (with the cats) I used the contents of their litter pan (once it turned back to sawdust) as cover material for my own sawdust bucket toilet. Now I seasonally live in the van, and the cats and I compost together on the humanure compost pile, which gets nice and hot. The plan is to let it age for two years, and it will likely be used primarily to plant perennials and trees.
show more
10 years ago
composting
How can I protect my garden from HUGE gophers? They ate my horseradish, artichokes, peas.
Oh, and DON'T SPRAY THE OIL WHEN THE SUN IS STRONG!!! It will burn your foliage. It's best to drench in the evening, or better, wait for a few cloudy days. As an added bonus I think the oil spray killed some cabbage moth eggs/larvae.
show more
10 years ago
nibblers
How can I protect my garden from HUGE gophers? They ate my horseradish, artichokes, peas.
When the first of 70 cabbages disappeared, I said "oh well, they've got to eat too." When a week later 15 cabbages had been taken, I started to get pissed off. After 25 cabbages disappeared underground, I tried a castor oil/Dr. Bronners peppermint soap mix and drenched the soil with a hose end sprayer (8oz. castor oil, 1 t. soap, spray at 4 T./gal. shake well while spraying) That seemed to slow them down. They moved and took a few broccoli plants (unsprayed) the drench worked pretty good (they don't like the smell of castor oil) until a heavy rain. I think I picked about 40 of 70 cabbages. :

.
I want to try planting Castor bean around garden margins to see if the plant has a deterrent effect (watch out...castor bean is VERY poisonous)
I made cages or baskets out of small hole (1") chicken wire, using a 5 gal bucket as a form to bend it around. This cage got buried in the soil when I planted my artichokes...this works great. The 'choke can grow long roots through the cage, but the main root and crown stays protected from massive trauma. This would be a pain in the butt for crops you dig (horseradish) but maybe a larger fenced subterranean area? Fenced hugelbeds? (lay a layer of chicken wire down 1st?) I tried this on a "no kill" farm, and these things kind of seemed to help. We also had feral cats that would hunt in the garden, but I don't know how many actual gophers they caught. Not enough. I personally have no problem using them for target practice and seeing if the chickens will eat them.
Good luck.
show more
10 years ago
nibblers
Natural Spring Drinking Water
Theresa, if your spring has adequate flow, you might be able to use a ram pump to move the water where you need it. Check out the Ram pump thread on the homestead forum. Good luck.
show more
10 years ago
homestead
Anybody have micro hydro?
Thanks for the input guys.
You're right Mark. After running the numbers a few different ways, my conclusion is that this site has enough water for domestic use, but not enough to make micro hydro cost effective. I'm going to concentrate on setting up for domestic/agri water only.
Maybe I'll look into wind at a later date, and just be satisfied with solar for now. I'm OK with just using less power and shifting my activities to take advantage of natural light. Other members of my group are pretty fixated on having electric luxuries. Oh well.
Thanks again for the advice and the links.

show more
11 years ago
hydro
Lots of thoughts on saving power.
Thanks for the ideas. I'm getting ready to build a house (I'm doing the wiring) and I like the idea of having outlets on a switch to help with phantom loads. I think I'll use that.
I'm also keeping circuits dedicated to lighting, so I can swap them over to a 12V distribution panel and bulbs after the inspector goes away for good.
show more
11 years ago
frugality
road kill.
Last year I got a nice turkey around Halloween. Broken neck, broken wing and still warm when I got it home and plucked it. Musta been the car ahead of me that hit it. Cooked it up for my buddy's birthday, some folks were kinda grossed out, but most tried it. It was tasty!
I've also eaten roadkill deer at my brother's house. That was my first roadkill experience.
So if it's fresh enough, not squished in the middle, and no wardens around, I'm totally down with free meat.
A couple days ago driving to town I saw a roadkill deer where somebody took just the hindquarters, so I'm not the only one around here eating roadkill.
show more
11 years ago
frugality

women peeing outdoors
I agree I find peeing outside far, FAR preferable to a portapotty. I don't go into town much, and out here I am surrounded by people I know and like. Some of my male friends feel comfortable peeing in my presence, facing away from me. I pee in their presence and if I'm facing them there's nothing for them to see since my pants don't go past mid/upper thigh.
Everybody pees. It's normal. It's not shameful, or sexual (for most ppl, LOL) or dirty. It's just peeing; a part of life.
show more
11 years ago
homestead

Removing dried grain corn from cob for grinding (Shelling Corn?)
Oh yeah...I used the bottle opener on my Leatherman multi tool to get any tough ones started. I know these folks. They wouldn't sell it if it didn't work;
http://www.southernexposure.com/sheller-corn-supply-p-198.html
Still, I'M too cheap to buy it when I can drill a hole and pound some nails for free. I wonder if the board could be put atop a bucket and the tendency of kernels to fly around wildly would be minimized.....?
I can't believe anyone used spent cobs to wipe with! They can be SHARP!