You know you're a permie when...
When you do buy can goods, you're on look out for the No. 10 cans, so you can make a new top for your 1G-2can TLUD stove.
show more
3 years ago
meaningless drivel 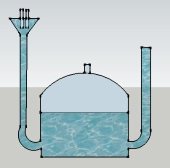 Mollison's Trompe - alternative energy
Here is a video of a guy using a trompe for cleaning mine waste water by increasing the dissolved oxygen.


I think an over-looked application is actually refrigeration, preservation of food, and energy storage. Air conditioning is a good secondary use after first being used for refrigeration. Also air conditioning (cooling) can be done with cooling tubes buried underground in conjunction with solar towers, but it's hard to find an alternative for active refrigeration (freezing) to preserve food year-round. Root cellars work, but not in Louisiana where I am. Bill Mollison said in the video that a property of compressed air as an energy storage medium is that the energy doesn't degrade over time and can be distributed without losing power unlike electricity. I can imagine large banks of low-pressure air tanks for storage and networks of piping throughout a community for distribution.
show more
6 years ago
alternative energy 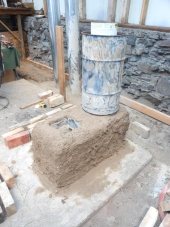 Wow! didn't realize my question was relevant to someone living that far away from Louisiana, USA.

I also had concern about off-gassing of charred material within the clay binder. The thing about char is that all of the volatile gasses have been boiled-off. Char is only useful as fuel in the presents of oxygen. The clay should provide an effective boundary between the char and the outside gasses except for those few pockets at the surface, so some minor pitting should be expected on the surface. But, also realize the environment of the riser is starved of oxygen because of the fire.
show more
6 years ago
rocket mass heaters

Thanks for you're reply. As I have never actually built one of these things, I value your experience. I like the suggestion about the sonitube. I would need to go dumpster-diving at a construction site to get some. I can see the advantage of using an inert insulating material such as perlite. It probably fills the same role as grog or temper when making pottery. The only down side I see is that I can't locally source perlite or vermiculite, so I would have to go buy it.

I have heard many references to using perlite and/or vermiculite with clay to for an insulated riser, which I'm sure works great. My interest in the bio-char as an insulator is mainly because I have some, and I'm looking for ways to use it. I've built the 1G toucan TLUD stove Paul featured in one of his videos, and now I have several gallons of raw, crushed bio-char. In the video below, Ernie's friends at Aprovecho describe making insulating refractory brick with clay, sawdust, and water, which then needs to be fired in a kiln. The need for a kiln is the main reason I wouldn't just make the brick, because I don't have access to a kiln, and I'm not willing to make a kiln. But, the only draw back from using the Aprovecho recipe for a cast in-place riser that I've heard is that the sawdust takes a long time to burn-out (and that it tends to crack when drying), so the full benefit of insulation is not realized until much later in the life of the heater. This then leads to my question of why not use bio-char instead of sawdust.

I can appreciate the tried-and-true advice to use perlite/vermiculite as the insulator, but something seems off if I have to create demand for a mined material that needs to be shipped to me when I could potentially replace the material from local, renewable resources while gaining the heat benefit from its production. I'm sure I'm not the first to have this question. I'm often disappointed to realize that my great ideas have been thoroughly documented in the 1800's. I guess the real answer is to try it myself and report my findings. That may take a while to get around to...

RMH: Cast in-place riser tube materials formula
I've watched a few of Erica's and Ernie's seminars on RMH. I've heard the question posed as to whether it's a good idea to use sawdust and clay as medium for a cast in-place riser tube insulation. I understood Ernie's response to be that the sawdust would take nearly a decade to completely burn-out. My question is: has anyone tried to use bio-char in place of sawdust in a clay mixture as it's already burned-out? I imagine that this would be an excellent recipe for a cast in-place riser. Thoughts?
show more
6 years ago
rocket mass heaters
Massive Thermo Mass Battery in my round house Suggestions
I love this idea of thermal batteries.

I've been preoccupied with this idea for about a year now. I've been searching videos, articles on rocket mass heaters, building construction using rammed earth, passive cooling -- stuff like that. Sadly, the reality is that I will probably never be able to implement these ideas from the ground up, as we've just purchased a home that was built about 30 years ago. But, I was thinking I could build a couple of heavily insulated sheds each filled with a large thermal mass (concrete, metal, stone, sand, oil, water) which I selectively charge during the off-season -- circulate hot summer air in one shed to be used during the winter and cold winter air in the other shed to be used during the summer (condensate could be collected to supplement water to the garden). If I were particularly zealous, I could boost the effective thermal charge of each shed by engineering a supplemental charging system -- perhaps a network of subterranean cooling tubes for the cold shed or perhaps a top-mounted parabolic solar trough on the hot shed to heat a heat-transfer fluid. I live in the south, so I would probably want to have my cold shed three to four times larger than my hot shed since the summer-time air will contain lots of moisture and my winters will be relatively mild. If I lived near the coast, a river or a stream, I might consider pumping the available water through my cold shed depending on the the water temperature.
show more
8 years ago
wood burning stoves