Fence corner options question
We are in the high desert of central Oregon. While I am sure all the corner fence advice is viable to many areas that have soils that can be dug in or post pounded... the one size fits all of installing fence does not work the same here. Mainly its all lava rock down under 2 or 3 feet of shifting silt. We have had to use a rock drill and in some holes concrete. If anyone has solutions to putting in fence posts that does not involve ripping off the ole mans shoulder... (we are "over the hill" here) We would be all ears.

Oh, and I am a little curious about the photo with the red lines... Todd, isn't that backwards?

Hope you all have a great weekend!
show more
4 years ago
homestead
Juniors Farm in Bend Oregon

COB PROJECT CAMPUS IS LOOKING FOR A FEW GOOD TEACHERS

If you are a sustainable living or earthen building teacher and have good cob building or other permaculture skills that you would like to teach here at the campus this year we want to hear from you.

Contact me Ruth Nichols by responding to cobprojectcampus@mail.com (yes mail... not gmail) to talk with us about what we are looking for and who is best to fill that spot. We have a few more time spots open for campus projects, teachers and room for one more intern couple or single.
We are still a new campus in the building process but this is the perfect time for good permaculture or cob building teachers to come and pick out of the premium spots being offered to teach in. Don't discount yourself if you have never taught a class but have a lot of skills. We can most likely work with you on that as well.

www.cobprojectcampus.org
show more
4 years ago
cob
Juniors Farm in Bend Oregon
Cob Project Campus is starting it's first mini (about the size of a tennis court) permaculture example on this mini permaculture in the making campus. This example will have a cob house, greenhouse and garden to show how one individual or a couple can sustain life for themselves here in a desert environment. Our campus is just under 3 acres in the middle of the high desert badlands in central Oregon. We are in the design process of this 200 square foot cobbit house but most of the prep has been done including ground work, tree and stump removal plus piling up dirt close to the build site, gathering materials and foundation rocks. Our curator, Samantha Rizzo is leading this project to become a fine example to those with little to any money to speak of for their own individual needs. We would like to keep this thread updated with photos and events concerning Juniors Farm and how others can have something similar to that on their own piece of ground.
show more
4 years ago
cob
Fruit Walls: Urban Farming in the 1600s
I found this article a few months or so ago and thought it was pretty interesting... and possibly could teach some things to new gardeners and permaculturalists alike.
*******************************

We are being told to eat local and seasonal food, either because other crops have been tranported over long distances, or because they are grown in energy-intensive greenhouses. But it wasn't always like that. From the sixteenth to the twentieth century, urban farmers grew Mediterranean fruits and vegetables as far north as England and the Netherlands, using only renewable energy.

These crops were grown surrounded by massive "fruit walls", which stored the heat from the sun and released it at night, creating a microclimate that could increase the temperature by more than 10°C (18°F). Later, greenhouses built against the fruit walls further improved yields from solar energy alone.

It was only at the very end of the nineteenth century that the greenhouse turned into a fully glazed and artificially heated building where heat is lost almost instantaneously -- the complete opposite of the technology it evolved from.

Is it possible - would rice from the supermarket grow?
Been thinking about this as an experiment at CPC for a few years... We have a small pond type container to try it this summer... but I may just go ahead and try an indoor experiment before warmer weather arrives.
Thanks everyone for all the great info and link shares.
show more
4 years ago
grains and pseudograins 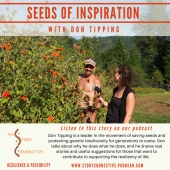 Cascadia Bloggers/Websites/Facebooks/Project Threads/Youtube Channels/Etc.
We are still in the building process. Is this post okay?

show more
4 years ago
cascadia
School Gardens- starting out
You sound like how we started out 6 years ago. Honey, this is a touchy ground to walk on for sure. If you want to do good for others one needs to remember the neighborhood mentality. There is always jealous people that want to hurt what they don't understand. If everyone felt and thought like you and I then the world would not be so twisted with jealousy and hate. We are lucky to have the neighbors we have. Many of them are supportive of our efforts to build this campus much like you described and the others are just quiet with no real opinion yet. We love our neighborhood and I think that is the key to success. If you love your home and neighbors you can do a lot with them possibly even getting involved too in a more positive way. If you are in a tight minded neighborhood then you have your work cut out for you in spades. I wish you all the blessings in the world for that endeavor of yours no matter what you choose to do. It sounds like you are the kind of person I could like as a friend. cheers!

show more
4 years ago
suburban
Looking for the next intern for Cob Project Campus
We have tried the WWOOF experience... We are still to new of a campus to house or be able to invite anyone beyond those that are used to more accommodations beyond primitive camping. We are happy to invite volunteers and weekend campers or even folks that have their own living apparatus completely contained for a few days up to 3 months. Cob Project Campus is a newly developing permaculture and primitive skills educational campus in Bend Oregon. We need honest and hard working help that wants to see something good for education and the community in the high desert of Oregon. We are working hard to develop a campus that will teach many free classes as well as regular events for beginners in permaculture and or gardening. We are always looking for teachers that want to come to teach most skills and building techniques right here at the campus.

If you think you could possibly be a good fit for what Cob Project Campus is looking for then lets talk. We do not currently have any trailers to use but we do have space for your fully contained small rv or vintage trailer or tent camping. The campus is still a construction sight but has a outdoor shower and outhouse for those brave enough to call it good. There is no implied utilities or food at this time as we are looking for trade help to get those established. Our garden needs work and our camp ground is still pretty rough... but over all there is nothing wrong with the views or the nice cozy neighborhood we are in. We love our neighbors and want to keep it peaceful and respectful. What CPC needs is hard working folks that want to work share trade the gardens produce for help with the campus. We also would like to ask for each Cob Project Campus member to donate a little time each month to the campus... not part of the work/trade agreement. Cob Project Campus is a not for profit (not a 501c3) facility but it does not mean the visiting teachers will not earn their fees to cover costs. We are hoping to create an environment that helps each other and those of the community that need good teachers like you to help them through the tough changes so many are facing.

We are very selective who we want to have at this small campus, so please know there will be a lot of questions and some good references will be needed to verify your claims. Thank you for understanding.
show more
4 years ago
internships & apprenticeships