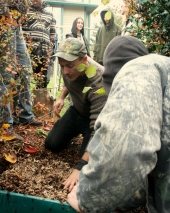 I look forward to learning more about fungi and their proper role in growing food and other plants. 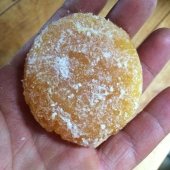 Cured Egg Yolks
Separating the yolk from the white is easy if you use an empty water bottle (pint or smaller).

Squeeze "enough" air out.
Place the opening of the bottle over the yolk.
Release the bottle, and the vacuum inside will pull the yolk into the bottle.
Squeeze the bottle again to eject the yolk (in this case, onto the salt).
show more
4 years ago
cooking

I had hoped that was the case, and from what I have seen, it was a valid hope.

If you know, will worms (red wrigglers) be happy in the same environment?
show more
8 years ago
composting

Black soldier fly larvae: poultry, fish food
I'm about to build the BSFL bins in the "basement" of our greenhouse, beneath the rabbit hutches and above the fish tank.

My only concern is whether I need to "strain" out the urine. If it were red wrigglers (which we cannot use there because of limited available height), I'd pull the liquid out and use it outside for nitrogen. But it seems BSFL are not unhappy with a yellow shower several times a day. Or am I wrong?

If I am right, however, it will save me a lot of work (one of my goals), and give us better "residue" for the compost bin (and wriggler bins, if and when I get them incorporated).
show more
8 years ago
composting 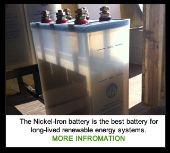 Edison Cell battery
There are other sources besides beutilityfree. I am working with a place here in Colorado called IronEdison. Try them are http://www.ironedison.com

They don't import in batch, but order everything custom on demand. I'll be visiting them in two weeks and will post what I find.

There is also a website for enthusiasts at http://www.iron-nickel-battery.com by Ian Soutal who's done a lot of research on the history and modern usage of NiFe batteries.

A magician with a couple of curious hobbies has a site that discusses NiFe batteries. Look here: http://www.noonco.com/edison
show more
8 years ago
alternative energy

Nicholas Covey wrote:Things like this make me wonder sometimes if there are other insect, or lower creatures which can be farmed or raised for our benefit. Bees and earthworms are noteworthy, but there are billions of species of insects.


The only "domesticated" insect is the silk worm.

Bees are wild creatures we house and rob. they never get "tame", although we breed them to be more calm.

Anyway, you're right. With hundreds of thousands of species, we could and should use everything available. We may, as with bees, create a symbiosis where we all benefit from the joint ventures. We use lady bug beetles to reduce aphid infestations. Praying mantises work the same way. Geese are good watch, er, animals, and so on. There are probably hundreds of good ideas not yet incorporated into the permaculture philosophy.
show more
8 years ago
composting
Harvested my first rabbit today, but questions
I've used cervical dislocation methods (sticks or karate chop) for decades. However, I'm getting too old to do that successfully every time, partly because I'm just getting weaker, but partially because hitting the poor thing two or three times "to be sure" gets a lot blood in the neck meat. I'm working on a guillotine: heavy blade, spring-loaded, with a hole just about large enough to get bunny's head through.

Swift and clean. That's what I'm looking for.

As for the head and feet, I have the same quandary: no good solution. However, if my experiments with black soldier flies go well, that may be a problem solved. We'll see.

I hold the rabbit for a minute to calm him down, stroke him a bit and then, still stroking, I hold him by the hind feet, and then deal the blow. As I said, it's been successful for a long time. The rabbit rarely gets agitated. I haven't heard the rabbit in distress cry more than a half dozen times since I started raising them 35+ years ago while stationed in Italy.

Meat and meat-like stuff does not belong in a compost bin. It takes 'way too long to decompose, worms don't like it much, and it stinks. That's one of the three biggest reasons we're doing the BSF experiments. I'll pass along what I learn, but, from what I've read, they leave nothing but bone and hair. (We don't use the skins, too much work when they are that young.)

I am interested in what people are raising. I have Florida Whites now. Smaller and more dense. Faster maturing: better feed-to-food ratio. Smaller hutches, and fairly good litter size. We've only had a few die at kindling, and rarely afterward.

Anyway, breeds of rabbits are like breeds of dogs: everyone has a favorite, and, like sex, religion and politics, it may not be a topic for polite conversation.
show more
8 years ago
rabbits
batteries: AGM vs. Lead-Acid for solar
I have no experience with lead-acid batteries, nor any other kind dealing with photovoltaic or other alternative electrical generation.

However, my research for our near future system has led me (pardon the inadvertent pun) to discount lead-acid batteries entirely.

They are very expensive, and they cannot last more than six years in bad cases, ten in the very best. That means that once a decade you are faced with apending $5~10,000 for replacements, and have tons of lead to deal with along with the dangerous acid. No thanks, I'll go another route.

I have recently discovered Thomas Edison's nickel-iron battery. It's not a direct, one-to-one drop in replacement for the lead-acid battery, but it comes very close. (The electronic controls are somewhat different, and the number of cells required is slightly greater.) They are even more expensive, but they last up to a century. Jay Leno and his wife each have a Detroit Electric car from the pre-WWI era, running with the same batteries installed at the factory. Others have batteries that are 50 or 60 years old and still running at the rated capacity.

I'll probably spend 15~20% more for the initial purchase, but that will be my final cost for batteries. They'll outlast me, fer shure, and probably the solar panels on the roof as well as the electronics to keep 'em going.

Neither nickel nor iron is toxic, like lead. The Potassium Hydroxide (KOH) electrolyte is far less dangerous than sulfuric acid (H2SO4). Of course, they produce hydrogen, but because the electrolyte is compatible with platinum, it can be captured and returned to the cells as water by catalytic cell caps, so there is no need to vent them, and they go a very long time without needing additional water. They operate in temperatures from -40~+60°C. They can remain uncharged for decades, even dry out, and there is no necessity for do much more than refill the electrolyte and charge them.

The Edison Battery Company was sold to Exide a few decades back, and they stopped making them. But there are three importers that I have found who can fill your needs. One's a dozen miles from our Colorado home. Another is in Montana, but I have forgotten where the third is located.

Check out the enthusiasts' web site http://www.nickel-iron-battery.com where Ian Soutar gives much more detail on this technology.
show more
8 years ago
solar