Jerry Ward wrote:My goal is to be able to raise one head of beef cattle at a time to supply my family. I'm in S.E. Michigan, can anyone tell me how many acres of pasture I would need to do this? I was thinking about one of the smaller breeds like a Dexter. My hope is to spend 2013 building up the needed pasture and get the animal in the spring of 2014.

I'm a fellow dreamer/planner. This is a good site for determining how much land you would need to support your herd/family cow. I'm calculating needing 1.92-2.88 acres of land just for 1 Dexter to have winter pasture, and an additional 0.688-1.032 acres for summer foraging. If you want a cow and her calf, you'll need to make adjustments. http://www.caf.wvu.edu/~forage/paddocks.htm
show more
9 years ago
cattle

winter grazing instead of hay (going hayless)
I love it. I wonder how it works for other animals. Thinking of the critters that fit best into suburbia, this might work better for rabbits (harbivores) than for poultry (omnivores who also need worms and bugs).
show more
9 years ago
cattle

How Grassfed Beef Will Save the World - Chris Kerston of Chaffin Orchards at WAPF-Santa Clara
BTW, if I knew how to edit my earlier post I would, but I don't so I won't. I do know that those aren't the world's oldest olives. That would be ludicrous. They're the world's oldest Mission olives. It's an idiotic detail, but I hate to leave it hanging out there.
show more
9 years ago
cattle

paul wheaton wrote:Nature is going to try and take out a monocrop. It is nature's design. Orchards are monocrops.

You're right. Orchards are monocrops.

paul wheaton wrote:But if you take out 90% of the trees yourself, and fill the spaces with a variety of other species, then the remaining trees can have long vibrant lives with no care. In alignment with nature.

You're right about that one too.


paul wheaton wrote:Granted - taking out a very old and productive tree is a painful thing. Probably the most painful thing to give advice about when a permaculture designer encounters an orchard. And most orchard owners will not do it. At the same time, at least if we project the message, then when there is a new field and somebody says "orchard!" hopefully somebody else will now say "how about a food forest instead?"

At my home, we have a tradition that when you realize that you were wrong you do an interpretive dance called the I-was-wrong-and-you-were-right dance. I'll spare you the moves, but I will be grown up enough to realize that this probably means I still have some growing up to do. I have no problem cutting down a tree that doesn't provide food for man or beast, but I still find it very painful to cut down productive food trees.

I probably should have listened better when you said this to begin with:

paul wheaton wrote:When I visit a lot of places, it's kinda painful because they have a long ways to go to get to what i think is good. But these guys were most of the way there.

This got me thinking. I wonder what it would look like if they took the same variety of trees that they already had and replanted them in a mixed orchard. As it stands they have about 20+ varieties of fruit, but each is segregated in its own orchard. It would take the same amount of space to plant the same varieties in a mixed orchard. However, the insect predation on the orchard and the disease in the orchard will go down. It would not be the food forest you're looking for yet, since it misses out on the other six layers of the forest and on trees that provide resources other than food, but it is a step in the right direction that we know is do-able since they're already producing that in the same amount of space.
show more
9 years ago
cattle 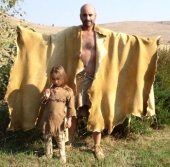 in search of natural clothing - especially winter gear
This family used flax and birch bark--neither of which would be my first choice. In some ways, they seem to lack the preparedness for the life they chose, but they do prove that where there is a will there is a way. http://www.theblaze.com/stories/2013/01/30/russian-family-so-isolated-for-40-years-they-hadnt-even-heard-of-wwii/
show more
9 years ago
textile techniques

paul wheaton wrote:When I visit a lot of places, it's kinda painful because they have a long ways to go to get to what i think is good. But these guys were most of the way there. The two suggestions I made were: more texture in the landscape (the land is too flat); move away from "orchard" and toward "food forest" (convert from 100 olive trees to 10 olive trees, plus 20 other species)