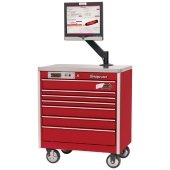 Your tools, my tools, our tools
Every tool box I have has a built in lock or a place to put a padlock.

show more
9 years ago
wheaton laboratories
Driveway grass control
propane hand held torch that attaches to a bbq tanks and a dolly to put the tank on.
seen here
harborfreight has them for $20.
Walk the driveway after a rain, or when there is dew and singe all of the plants to the ground.
I had a friend who made a potential boom squish attachment out of a small, hand pump sprayer something like this and copper pipe wound around the flame portion, it had pressure release valves, so no boom squish. it shot steam out so fire hazard was low.
it made good steam without having to pull the trigger on the porpane torch. that is, just the pilot light on the torch was enough to get good steam.
It's been a while, but I think we attached the wands together with zip ties and used the trigger on the sprayer for steam production.
not sure if that makes sense, it would require some tinkering, and careful planning to avoid death.
However, we used it and it worked great.
show more
9 years ago
earthworks
Using Worms to Filter Gray Water
These folks make and sell black water systems that work with worms. Apparently, they have installed them successfully, in alpine areas, arid areas, sub-tropics, and tropics.
One can go away for a while, system slows down, and then when one returns, the worm eggs left in the system will hatch and back to poop fest.
http://www.wormfarm.com.au/domestic/
PRI's website had a nice write-up on them a while back, you could search there for the article.
show more
9 years ago
grey water
WVO Blending with Gasoline to Make Diesel Fuel
My injection pump costs $1000 at a minimum, I am skipping all things WVO.
And, yes, sourcing oil seems to be a problem.
My friend uses WVO and his rig is always needing to be fixed -- way too much tinkering for me.
show more
9 years ago
biodiesel
Bacon: The fountain of youth
That's what this 105 year old says, and she eats bacon every day.
So, have at it.
http://www.huffingtonpost.com/2013/05/07/pearl-cantrell-bacon-105-year-old_n_3230095.html
show more
9 years ago
meaningless drivel
Earthworks in areas with high water tables
I had wanted to share one more thing.
Did you see Goeff Lawton's video of the design for 5 acres?
There was a part of that design which I wanted to describe, and now it's out on video.
He shows foot paths, on the bottom left corner, which are filled with gravel.
They irrigate the "islands" in between the paths and no standing water or pipes for irrigation.
I think he dug down 3,4,5 feet and then backfilled with gravel, now a nice path that irrigates too.
Not sure if that helps, at least maybe for some aspects best of luck.
Ponds with fish to mitigate skeeters.
Try some things, make glorious failures, and successes.
Let us know how it goes, eh?
Pics all along the way would be awesome!
show more
9 years ago
earthworks
Suncalc.net - Interactive sun positioning integrated with google maps
here is another one, such cool website, these are.
http://www.sollumis.com/
show more
9 years ago
web sites
Pig farmers -- Iron shots?
Thanks for the excellent responses!
I really like the frying pan, is that an old farm trick?
show more
9 years ago
pigs
microhydro book
Hey there,
I won a copy of the Microhydro book for a super stupid joke that beat out other jokes, many of which were terrible too.
Some of the jokes were good, however.

Anyway, the book never arrived, I was just wondering if I missed it in the mail?

I won the book b/c I am signed up for Paul's dailyish emails and he gave it away for dailyish email subscribers only.
So, if you aren't signed up, you are missing out on winning free stuff and advance notice on good info.
show more
9 years ago
tinkering with this site
volunteerism
So, I will have some free time coming up for the next yearish, maybe more if our plans prevail, and I am wondering what sorts of things I can help with here?

I can do, linkage stuff.
I would guess I can figure out Reddit.
Appropedia's website is, for me, hard to navigate, however, I am a wordsmith by training, so if there are specific articles that need to be written, based on permies.com threads, I am happy to give it a go. Just tell me which threads to convert.
Maybe someone can point me in the direction of one of these areas, or if other more pressing things need to be addressed, that's cool too. Just let me know.

I met Paul at the earthworks class and discussed these things with him and he told me to pop up on this forum and say I'm here.
I am very grateful for this website and want to show my appreciation.
I think I can put in an hour a day, or 7 hours a week, and see from there.
So, here I am.

show more
9 years ago
tinkering with this site