Late Frost Concerns- Should I act?
If you're based in Missouri, I would get thinking about longer term actions you can take for creating an early spring microclimate around those fruit trees to protect them. For example, early morning direct sun when there is frost is something to avoid.
show more
3 weeks ago
plants
Screwed my soil by too much horse manure. What now?
Yeah I put fresh horse manure on my strawberries after a friend swore by it.
Lesson learned. I'm sticking to whipped cream from now on.
show more
1 month ago
soil
Maggots on mushrooms?
They are most probably fungus gnat larvae, not blowfly maggots. The adults look a lot like large mosquitos.

You can place yellow sticky attractors around which will trap the adults. I found the larvae will abandon the mushrooms when they start drying out if you dehydrate them.
show more
1 month ago
fungi
Too much eggs. Can i freeze them?

Andrew Mayflower wrote:You can also salt cure the yolks and grate them as a cheese alternative on salads, pasta, etc.  You'd need to find another use for the whites in this case, but Pavlova, done right, is divine.

If you have access to a freeze dryer you can use that to preserve the eggs.  For that I think most people scramble the whites and yolks and then freeze dry raw.  You can cook them first too, but then you are locked into only having cooked scrambled eggs, which is fine for breakfast, or adding to fried rice, but not a whole lot else.  Left raw you can reconstitute and then use for any dish calling for whole eggs to be mixed in.

show more
1 month ago
chickens
Should you design for EMF, negative ions and other ambient radiation? You may already be.
There have been some studies released in journals over he past few years describing the mechanism of how cosmic and certain solar radiation directly influences mental health and triggers cardiac events.

People with existing heart issues or mental health / anxiety issue are particularly vulnerable.
show more
2 months ago
permaculture design
Why there is not a software solution to find optimal planting layouts for plots/beds/guilds.
Like you said, you aren't looking for THE optimum solution.

When a human goes about planting a bed, they have a primary plant in mind for a given area, and then support plants. So we tend to assign some form of weighting / ranking system to each type of plant, beginning with the highest ranked plant and filling in the available space.

My initial approach would be a greedy algorithm based on the weighting previously assigned to each plant type in the compatibility set.  I would also make use of a randomizing element that makes sure the packing isn't 100% optimal and there is more space left available for the lower weighted plants. That randomizing element will influence the overall balance of species, and at some point you may wish to replace it as a preset or configurable variable. Either way, it is necessary to avoid a "monocrop with a few extras" scenarios.

Once I had that basic approach more or less working and verified it does as I expected. I would start focusing on making that randomizing element more sophisticated. For example, an auto-tune / sweep algorithm that runs the packing algorithm over and over, each time incrementally changing this variable until the closest result to a target blend of species representation was achieved.

Another approach entirely:
Each plant species has an optimal growing density that can be represented by a grid. Starting with the largest grid spacing from the set of grids that are selected based on the plant species and working to the smallest, find the rotation angle of each grid such that when overlaid on the grow bed, the number of bisecting lines is maximized.

This provides the maximum number of each type of plant that can fit in the bed and is pretty quick using some matrix arithmetic.

Now start stacking each grid as a layer on top of the base garden bed shape and since we're really only interested in where the lines bisect, we can represent them as a set of points. As you do so, you will need to make a decision about what to do when a point gets closer to another previously laid down point by a previously determined threshold. Answering the question "do I remove the existing point, or do I not place this point" is where the real complexity lies, but hopefully this is enough info to communicate the concept.

Smart Drive wind generator
I recently replaced a corroded spider arm from our front loader Samsung washer. It's a terrible cast aluminum mounting bracket that connects the drum to one of these motors. Since the new one came with a drive shaft attached I decided to remove the old one since it is a nice machined steel shaft with the correct spline end for the motor.

What a mission. When I eventually got it off it was apparent that they cast these brackets onto the shaft. On the bright side, the other end also has a spline and with a bit of modification it should be good for attaching a different bracket to it for things like turbine blades or a pelton wheel.

Thermal syphoning with Copper tubbing wrapped around Bell/Barrel
Another option is a flash boiler. It's used by home brewers where they intentionally flash the water over into steam which is then piped to an injection point that heats the wort without scorching it.

They are just like those instant hot water heaters except they have more contact time between the heat and the water, and they have more heat of course.
https://www.homebrewtalk.com/threads/flash-boiler.153116/
show more
2 months ago
rocket mass heaters 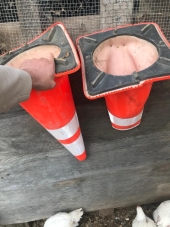 Traffic cone to kill cone
Start with a smaller hole you would normally think to cut.

We did this and we almost cut them too big. Chickens can squeeze through a surprisingly small hole.
show more
2 months ago
upcycling 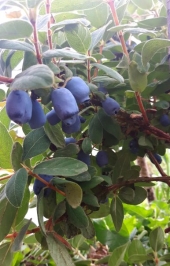 Haskap - Honeyberries
It's a super important plant in zone 3. It's the first berry to flower and fruit. So it's an important food source for bees and critters.
In this zone, the succession is haskaps, raspberries, blueberries

You will find some varieties are bred primarily for pollination. They are typically taller plants that produce lots of flowers, and tart fruit.
A great thing about that is you can quickly spot a pollinator because of it's size, and you can plant them behind your main fruiting varieties on the shady side.
show more
2 months ago
berries