I was able to find a used redwood hot tub on Craigslist over in Spokane. So after a little bit of a road trip I arrived back at Base camp with a hot tub that fits Paul's standards of aesthetics and natural materials.

Unfortunately the guy had started taking it apart just a few hours before I called so it is currently disassembled. Also, the hot tub sat empty for a couple years and is experiencing some deterioration. However, because of those two factors we were able to buy it for super cheap. Since Ernie has experience with building and maintaining boats, we are pretty certain we can get the hot tub to hold water. I believe the current plan is to use a mixture of raw linseed oil and lime to make a water sealant putty for the areas between the boards that are starting to rot.

Like with most structures here at Wheaton Labs, the hot tub is being placed on a skiddable platform. I dragged the logs for the skids down to the shop today and will start assembling the skiddable platform tomorrow. While I work on the platform, Erica will be developing a game plan to put the humpty-dumpty hot tub back together again.

As of a couple days ago, the exact heating system design hadn't been finalized so either Erica or I will be posting further updates in the coming days (along with more pictures

Jennifer Richardson wrote:when the vast majority of climate scientists do believe that anthropogenic climate change is a real thing that is happening

Would love to see some hard data for this claim.

If you are referring to the famous "97% of scientists agree" meme that has been circulated for the last few years, then I would suggest you look deeper into that survey.

To begin with, the survey questioned less than 4,000 scientists.

The questions asked of scientists in that specific survey was something to the effect of "Do you believe humans play a role in influencing climate change?"

Now there isn't a single credible scientist out there who denies that the climate is changing or that humans do play a role. The real debate is HOW big of a role do humans play. A glass of water poured into the Mississippi River will have an effect on the total water levels but the effect is trivial. Although that could be classified as a "false analogy" fallacy, I am not trying to prove my point with that statement; merely looking to make clear the perspective I am trying to point out.
show more
4 years ago
ulcer factory
fallacy vs. logic and reason

Scipio Johnson wrote:In this case, learning to recognize fallacies are one part of logical reasoning, which is itself the middle part of the grammar, logic, rhetoric method of critical thinking.

Thank you for sharing the link to the Trivium Education website. It's encouraging to see people taking advantage of that great resource.

Jan Irvin runs that website and has put a wealth of knowledge out onto the internet for free. Recently, he and Bill Joslin had an excellent podcast together where they expose the faults of nonviolent communication Is NVC consistent with the trivium method?. In previous podcasts Paul has expressed concerns about NVC and I believe his concerns are well-founded.
show more
4 years ago
intentional community 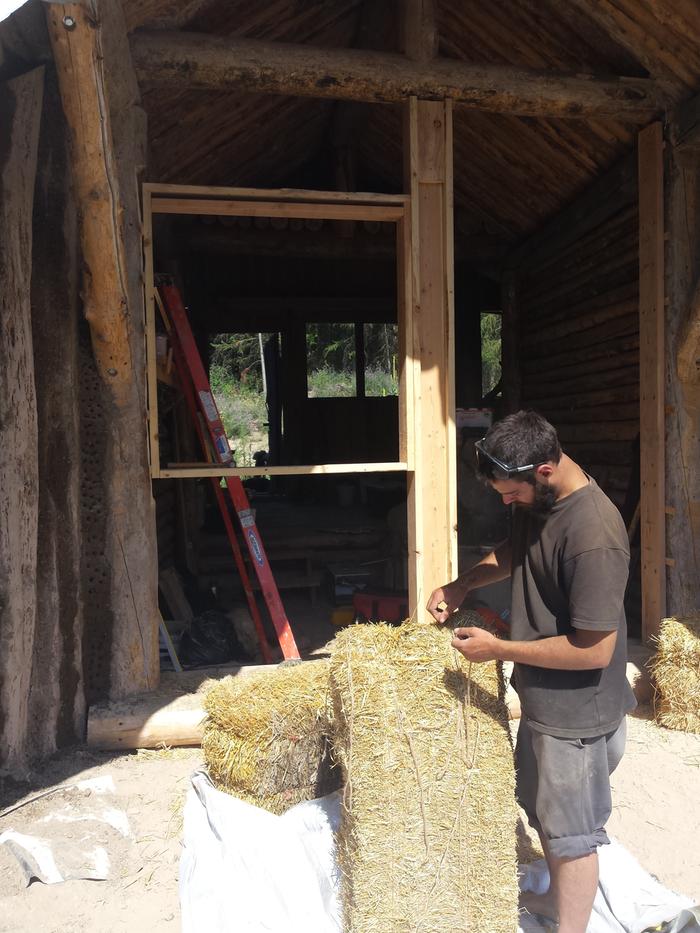 I noticed there are no supporting boards under the window frame. If the plan is to use a traditional window, I would be concerned about the window frame sagging over time.

Now if the square bales will end up being packed tight underneath it or if the plan is to build a lightweight window, then it probably won't be a problem.

Jesse Grimes wrote: The purpose of the cob plaster in this application is not structural, but to provide a surface to be white washed, reflecting more light into the house.

I might have missed a stated change in the plans but I was under the impression that Paul wanted to avoid any heating due to solar gain. That way if the WOFATI is a success people can't attribute the heating to passive solar.

Tim Skufca wrote: I am curious as to how the cob will hold up on the log substrate. Wood is not the ideal material for cob to stick to, and would benefit hugely by putting a steel mesh onto the logs first. The wood expands and contracts with the humidity, and even a little amount will crack the cob. Hopefully this won't be true for you guys.

I kind of had the same thoughts. However, I would tend to trust Ernie and Erica's experience over my own...
show more
5 years ago
wofati and earth berm
Straw source?
Searching Craigslist and local classified ads would be your best bets. Farm and ranch stores such as Tractor Supply Store often have agriculture specific classifieds.

However, I would suggest looking for old hay bales instead of straw. Unless you are looking to do a strawbale-type of construction, IMO old hay will be superior to straw for almost any application. Straw often has lots of different residues of pesticides present. As long as the old hay has some herbaceous plants present like alfalfa or clover, you can be reasonably sure it probably isn't contaminated.
show more
5 years ago
midwest usa


Wyatt Barnes wrote:Very pretty but in my opinion two seats is one too many, unless it is a matter of selection?

One of the holes had a urine diverter. Paul would like to keep the pee and the poop separate (he explains in detail in several podcasts). A lot of ladies pointed out to Paul that it was hard for many of them to go #2 without going #1 as well. Thus one hole was fitted with a diverter for the ladies and the other was left for any guys or gals who could control when/how they relieved themselves.

Last I heard they were trying to come up with a different style of diverter. Not sure if it was completed or not because last time I was there it was the middle of winter and the outdoor poopers were not in use.

Throwing seeds on top of soil
Lots of great points in this thread!

I'd also like to bring up the point that most traditional garden vegetables were bred and selected to perform under certain conditions. The scatter and walk away method is not one of these conditions. Now you would definitely have some seeds germinate but the success rate will be FAR lower than planting them the conventional way.

One approach I've been taking lately is to have a small area where I practice what I consider to be close to "ideal permaculture". Scatter seeds, don't irrigate, lots of polyculture, don't weed, etc, etc. The amount of plants that make it to the end of the season is kind of pathetic but each one of those plants will give me lots of seeds. I then plant those seeds in that small area the next year and continue year after year.

I'm hoping that in 10-20 years these seeds will have enough of the traits that will allow them to survive in a situation of sheer-total-utter-neglect (as Mr. Shepard would say). In the meantime I will still toil away planting my other veggies using strategies somewhere between conventional and my idea of "ideal permaculture". I want all of my gardens to be ideal but I want high quality, nutrient dense food even more. At this moment, making compromises to my ideals is what will achieve this goal. As it has been said many times, don't let perfect be the enemy of the good.
show more
5 years ago
gardening for beginners

new tractor
Awesome! I'm glad you shared your observations and experience in this area. Even though it sucks having to fuel equipment up and deal with the smell and loud noises, the increase in forward velocity with certain projects will FAR outweigh the negatives, in my opinion. Anyways, I hope the new tractor works out great for you!
show more
5 years ago
wheaton laboratories

Question about raised bed garden liner
That's awesome you are starting a veggie garden for the first time!

What do you plan the length, width and depth to be? How many raised beds are you thinking about building?


Oscar Cotton wrote:I'm not sure about the condition of the existing soil and if there are any toxins present

Is it possible to ask the previous owners if they used any pesticides on the property? That would be my main concern. Unless you live in an industrial part of town, heavy metals like lead and mercury shouldn't be a problem (not always though!). Don't plant your veggies within 5-10 feet of the perimeter of your house to avoid any old lead paint that might have found its way into the soil.

Like previously mentioned, the only way to know for sure is to have your soil tested though. If I was in your situation and could afford it, I would definitely have it tested.


Oscar Cotton wrote:I'd like to avoid plastics or other synthetics, because I don't want it leeching into the new soil

I definitely understand your concern in this realm. However, most plastics only break down and leech material when exposed to UV light. I'm sure there will be SOME particles that would leech from a plastic liner buried the soil but I'm guessing that the amount would be very minimal, maybe even unmeasurable.

If it turns out there is a serious toxin issue in your soil, you would be much better off with the plastic liner than risking contamination. The food grow above a plastic liner would still be FAR better for you than even organic vegetables from Whole Foods, etc., in my opinion. Other than concrete (like Chris already mentioned), plastic liners are the only other thing I can think of that would completely eliminate the chance of contamination.


Instead of growing your vegetables on the ground, why not build 3 or 4 elevated raised beds like the one below 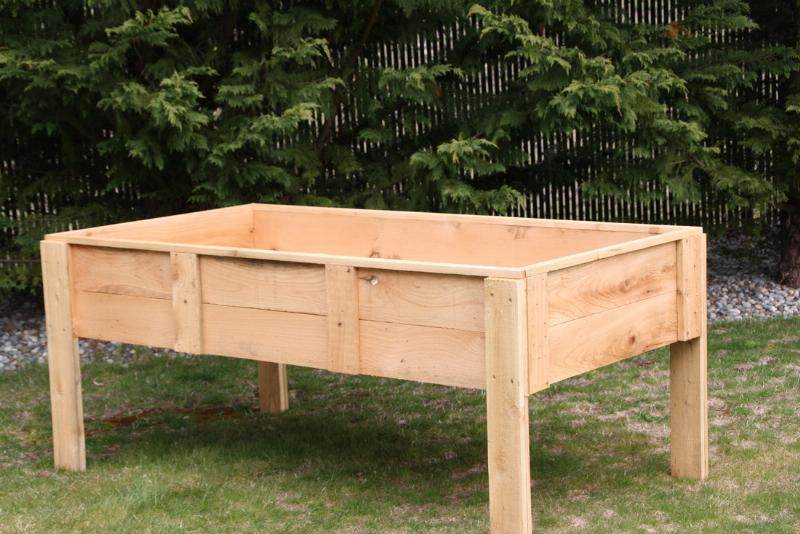 Using the Square Foot Gardening method you could get a good amount of food from four elevated raised beds like the one above. The best advice I can give you, in general, is to start small and build slowly year after year. Biting off more than you can chew can often lead to disappointment and a loss of interest. Expect to make mistakes and plan on learning something from them. Like many people have said, you learn more from your mistakes than successes. But most importantly, have fun! Good luck this growing season!

Just let go and let nature do its job
Great job, thanks for sharing your experience!


cameron johnson wrote:...Next I started using only rain water and the chickens water when it got to dirty for them...

Are you still only using rainwater and chicken water for irrigation?

In the picture below, is that a drip irrigation line? If so, would you care to share the details of that part? 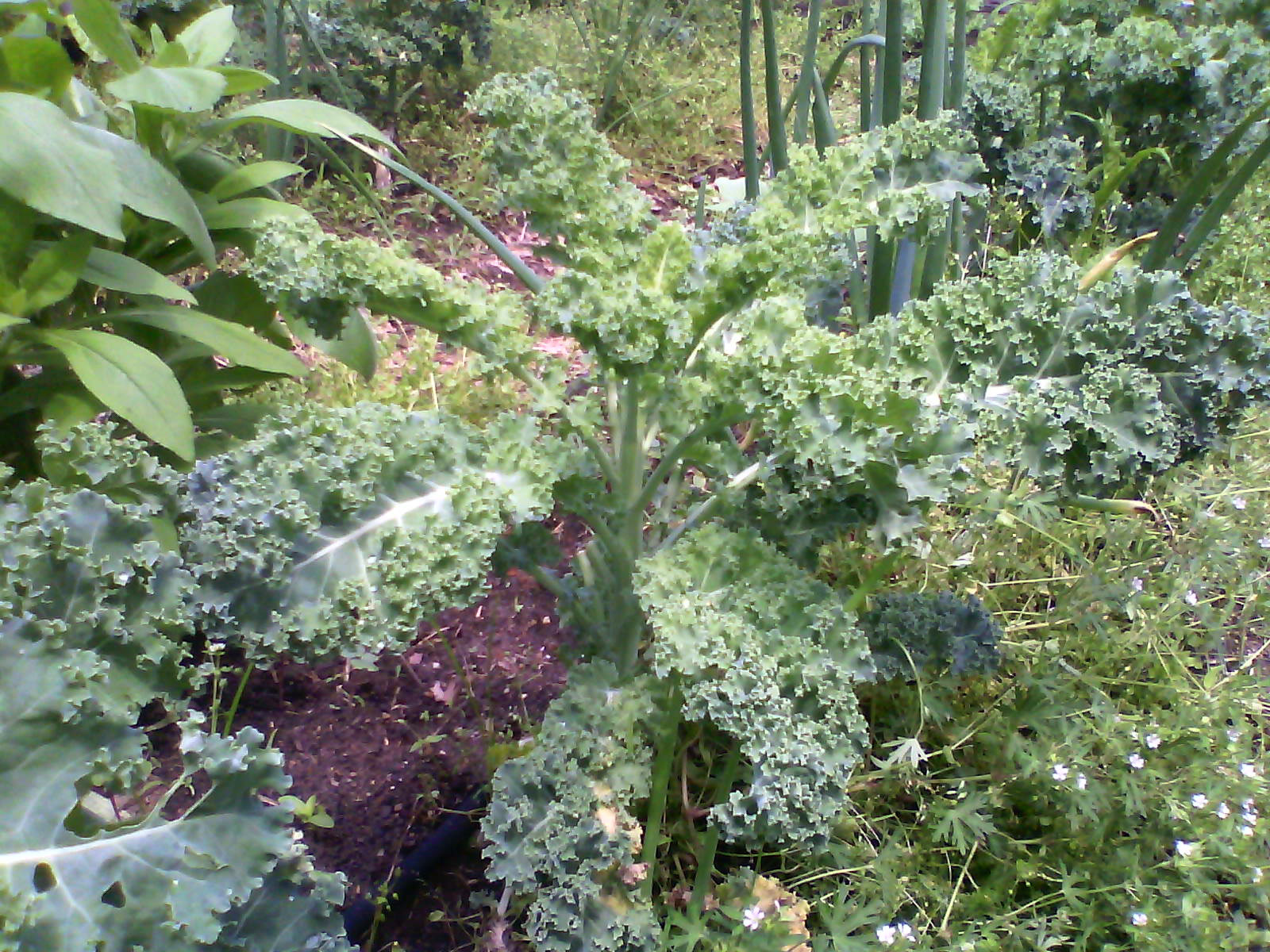