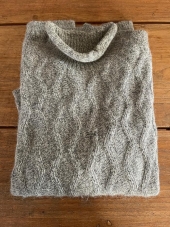 Itchy Alpaca jumper
Based on the halo that can be seen in the pictures I'm going to say x2 on finding someone to alter the neckline. Also, if taking it back and knitting a smaller trim you'd have some yarn leftover to save for mending that may be done later.

From the halo in the pictures it looks like the fiber was a blend and not dehaired. Which makes sense being actually from Peru, I don't know a ton about it but I don't think dehairing machines are used there. They just grade the fiber and different grades go to best uses softest to coarsest, rather than running the fiber through a machine to remove the coarsest fibers.

Remember that prickly feel is actually your skin reaction to the amount of coarser fibers poking out from the average. Coarse fiber doesn't have to be prickly and much softer fiber can be prickly if there is above a certain percentage of fibers that are coarser blended in.
show more
1 month ago
natural fibers and materials

Mend or darn a hole in a sock - PEP BB textiles.straw.repair.sock
This is a pair of my handspun handknit socks. I wore the soles and there was a small hole about fingernail size in one, and a thumb sized hole in the other. Plus they were thinning across the pad of the foot.
I have done a woven darn before and wanted to try a knitted darn. So I finally did! It's really easy, if you can knit a sock then you can totally do a knitted darn. I didn't think the yarn would unravel much more but I did use the tail to weave around the hole and weave it in, just to be sure.
After that I put a small jar in the sock and wove yarn up and down between the stitches across the thinning section for each sock. It's practically invisible.
show more
2 months ago
pep textiles

Quick darning - PEP BB textile.sand.darn
This is a pair of my handspun handknit socks. I wore the soles and there was a small hole about fingernail size in one, and a thumb sized hole in the other. Plus they were thinning across the pad of the foot.
I have done a woven darn before and wanted to try a knitted darn. So I finally did! It's really easy, if you can knit a sock then you can totally do a knitted darn. I didn't think the yarn would unravel much more but I did use the tail to weave around the hole and weave it in, just to be sure.
After that I put a small jar in the sock and wove yarn up and down between the stitches across the thinning section for each sock. It's practically invisible.
show more
2 months ago
pep textiles
Natural filling - online resource
Scoured wool, ready to stuff with. You could easily unstuff the pillow, wash the wool in a bucket or tote, lay to dry, and restuff the pillow.
https://rhlindsaywool.com/product/l-825-scoured-local-grey-xbred/
They source mostly in the US and have other fibers and roving and top available for spinning. Good price if you're going to do big projects and don't want super fine merino for everything.

Wool is easy to wash. If you can find a sheep farm they'd probably give you wool or sell very very cheap. Wool pool is even lower price than it already was before covid. And for stuffing you just need clean wool, doesn't have to be good quality. I have a big bag setting waiting on me that isn't spin-able but was washed before I caught the problem.
show more
3 months ago
natural fibers and materials
length of lactation and cheese making
Could be a combination of the season/forage change, and it's affect on the milk, and each animal will have a curve of production from birth and colostrum, more production, then holding at the level, then declining, and either tapering off to nothing or just milking a tiny bit. I believe there are studies that showed how the makeup of the milk changed over the time of the curve so that is likely a factor.

My parents had goats that some would taper off in the fall and we'd dry off. And some would be solid high volume milking with no stop from the first freshening til four years old. Never dropping production through breeding or gestation or kidding all over again.
Some animals can do that and some can only do short milk season enough to feed a baby and only that. You will have to select for what you want/need.
show more
3 months ago
cheese

PEP sections not showing?
That wasn't available on the mobile version of the site. I switched to desktop version and did the acorns and now it is showing them. I don't think I knew about that before so I don't know how I managed to make it go away in the first place. Thanks so much!
show more
3 months ago
tinkering with this site

PEP sections not showing?
I had not kept up with the pep stuff as it's been developing and decided to take a look. If I go to "pep" section the page shows the list of threads as usual. If I go to any "pep ----" sections it shows the page without any threads listed and shows the pages of threads.
Am I experiencing a bug or is there a "do this thing and then get access to everything else " that I missed?

Thanks!
show more
3 months ago
tinkering with this site
Increased Litter Size Through Double Breeding
Rabbits breeding works in that the eggs drop after the mating happens, rather than a cycle of available egg(s).
If you want to know who the dad is then obviously you can only breed her to that buck, but you can breed her more than once. For example if I can it's fine to bring the doe to the buck in the morning, then in the evening, then again the next morning. Now not all does will be receptive, so you have to kind of learn each animal. But frequently it's not a problem, just keep it to a 48hr period because you will want to know when she's due.
My theory would be that either for some reason she was already going to have that many no matter what you did. Has feed changed? The amount of kits is limited by how many eggs drop, which is determined in the does body. All you can do is feed as well as you can, then it's up to her.
The next reason could be the bucks. If one of the bucks consistently throws smaller litters with does that have larger litters to the other buck... Then his sperm motility may be impaired or he isn't having a high sperm count. Motility is genetic and the sperm will be malformed and keeps them from being able to get to an egg. Or the sperm is deformed enough that even though they may get to the egg, nature sorts things out and it isn't healthy enough to survive to term. If you want to know more about that there is plenty available on bull and ram testing. Sandi Brock on youtube has a video of the vet testing her rams to see which ones were causing problems. I don't know that there is specific testing like that available for rabbits but you should easily be able to figure it out by birth rates to different bucks and by each does history.
show more
4 months ago
rabbits 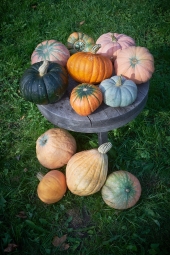 Squash, corn, varieties, oh my!
Thanks all! Baker creek is where I got the lemon squash seed from, they list it as mixta. A quick search turned it up on another site listed as cucurbita pepo. So I will err on the cautious side and see if I can plant them quite away from the others.

I saw acorns were pepo turbinata, after the wiki rabbithole reading up on the different family branches of squash. Good to know.

So as a rule the family names won't cross, just within the same family name. ...with the rare moschata being a pollen dad to mixta. Got it!

I still need to look at space needs for everything. I'm thinking if I plant the squashes at the far ends and run the vines out then I can optimize ground space for the rest of the plants.
show more
4 months ago
seeds and breeding

How to spin poodle hair?
Anything can be spun. It has much more to do with preparation and determination than most anything else. From the pictures and the only poodle I've ever pet in real life, I would expect it to spin like huacaya alpaca. If you can get it long enough, as you said in needing to keep up the brushing and keeping away mats in that time, it should spin nicely. In one of the FB groups I'm in there was a woman who had like 5 huskies and it was the only thing she spun and worked with at all.

I once spun alaskan malamute that I gathered as the dog blew coat. Lots of guard hair, don't recommend. And when I had a Silver Fox buck rabbit he had a really quick molt one year and for several days I'd groom him and I collected quite a bit of it. Silver Fox have really lovely floofy dense furs. It was maybe half inch long at most and I managed to spin a short bit of yarn from it, very very slowly.

A bit determination in spinning ability is the character of the fibers. The way it looks I'd say very huacaya alpaca-like and that means it would probably do best with a short forward draw, spun worsted, and would need alot of twist. Probably more than you'd think while spinning. Unlike wool that fiber has different scale structure on the individual fiber strand so you have to make it into yarn. Whereas most wool is quite grabby onto other wool fibers and just needs a little encouraging to become yarn. In my opinion, the way I spin. It would probably do well with a light carding and made into rolags.
show more
4 months ago
animal fibers