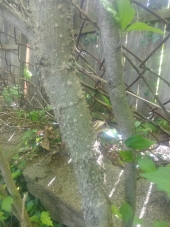 Tree Id
The way to tell if its southern catalpa, i.e. speciosa, is by the way the leaves come out in a whorl of three leaves. Based on that I would say it's the southern.
show more
3 weeks ago
trees

Tree Id
First one is rose of sharon, second one is mulberry, third one is catalpa, hope that helps.
show more
3 weeks ago
trees 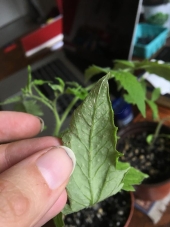 What the heck is up with my tomato starts?
Looks like whitefly damage, it's very common in potted plants. It should out grow the damage once planted out. If you put a layer of diatomaceous earth on the surface and keep it dry should take care of the whitefly.
show more
1 month ago
gardening for beginners

ID me! Berberis thunbergii, Japanese Barberry -- Noxious weed
My first thought would be a euphorbia of some type, I know it as ipecac. If it has thorns then I would say Japanese barberry. But I really would lean toward ipecac. I had one pop up in my garden and I figured out what it was at one point. It hung around for years then disappeared and now I cant remember exactly what species of euphorbia it was. But maybe that will help get you on the right track.
show more
1 month ago
plants 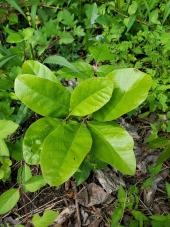 Is this a type of Baby Magnolia?
I think its laurel oak seedlings, or some similar oak.
show more
1 month ago
trees 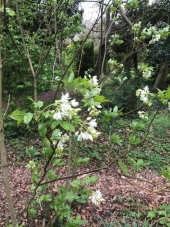 Finally built my compost digester and planted out my hardy bananas (Musa Basjoo) -- in Oklahoma!

Dan Allen wrote:I think you'll have good luck either way, especially if you're in southeast oklahoma.  I have read of decent results fruiting bananas there.

That swampy little corner of the state is almost tropical, like the part of East Texas it adjoins. I'm told the Oklahoma department of fish and game is terrified that someone will introduce alligators, because they would thrive there but are not present (yet).   But, sadly, no: I'm toward the middle of the state where we get hard freezes reliably every year.   We even get upper-midwest style blizzards (though not as strong) once every seven or eight years.   The last 4 years the low at my house has been 12 degrees F every year.

I just want a big plant with impressive tropical-looking leaves.  I am not looking for fruit.  However, there is a short-season banana (blue ice cream? -- it's been awhile since I did the research) that puts on fruit in 9-10 months instead of the year-plus frost-free that most bananas seem to need.  We currently have a 9-month growing season, and the thirty year outlook has us shifting from 7b to a solid zone 8 as global warming continues.  So it may be possible.

Ice cream is fairly hardy, but the shortest time to fruit is the veinte cohol, it's the standard in georgia. But as long as you can overwinter the pseudo stem or two thirds of it you can get bananas to fruit the following season. I had musa basjoo survive several fall frosts with only minor damage in Michigan.  -26 is the coldest they saw with only a light leaf mulch. They came back every year. Here in soflo the ice cream is one of the slower growers in winter, the cavendish and orinoco seem to grow faster through the cooler winter months.
show more
1 month ago
projects

Finally built my compost digester and planted out my hardy bananas (Musa Basjoo) -- in Oklahoma!
I think you'll have good luck either way, especially if you're in southeast oklahoma. I have read of decent results fruiting bananas there.
show more
1 month ago
projects

Finally built my compost digester and planted out my hardy bananas (Musa Basjoo) -- in Oklahoma!
Awesome setup. Those bananas are going to thrive. They dont resemble the basjoo that I grew, they look more like a cavendish type. But I am no banana expert. I did grow basjoo up north and now only grow edible varieties, and they look a lot like dwarf Cavendish, and super healthy looking.
show more
1 month ago
projects 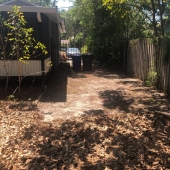