Anybody have geese that go into shelter on their own at night?
The geese I have had over the past 20 years prefer sleeping next to the shelter, whatever that may be, rather than in or under it. They are impervious to weather, far as I can tell. I provide shelter so that I feel better, and they ignore it.
As for predators, I'm in Michigan and have had no predator problems. But I also have several dogs.
The geese are actually scarier than the dogs, now that I think of it

show more
5 years ago
ducks and geese
Good breeds
I also meant to comment on the angoras, from the persepctive of a former rescuer who took in MANY unwanted bunnies over the years. The worst neglected and mistreated rabbits I saw were angoras. What a dumb way to build a bunny, lol. That fur is unmanagemable for the average person, even the caring & attentive average person. As for children being responsible for the grooming of angoras: NO WAY. I met several parents who were unaware of how bad their child's pet bunnies were doing until the situations were out of control with mats, maggots, flies, and misery. Then, embarrassed and ashamed (appropriately so), they brought the little things to me.

Also, angoras didn't have the best temperaments or personalities, compared to the larger breeds,
show more
5 years ago
rabbits
Good breeds
Regarding Flemmies: we took in a lot of these rabbits at our sanctuary over the years. My observations during that time were 1. Flemish giants are quiet, gentle, and easy to get attached to. They could easily become pets, and that might be a problem. Obeservation number 2 was that they break REALLY easy

Seemed like the flemmies found "dead for no reason" outnumbered any of the other unexlained rabbit deaths. Even holding them could be problematic, if they began to struggle. I recall one who broke its own back when being carefully handed over from one adult to another. We just kind of stood there in shock, wondering what the heck had just happened.

They feel a little more floppy than the other large breeds, like their bodies are too big for them to maneuver well, as opposed to the Cal and NZ who have a more dense & compact feel to them, even tho they're big.
show more
5 years ago
rabbits
meat chick odd symptoms
This morning I found one of my 50 Freedom Ranger chicks (age 1 week) upside down, with his neck craned strangely backwards. When I righted him, he flapped and flailed trying to stay upright, but was unable. He has strength, has no discharge from any orifices, and is not weak. When I checked just now, he was laying on his back with his legs straight up in the air. I again set him right, but he quickly went back to flapping and falling over. Nothing is obviously broken or injured and none of the other birds are showing this behavior. I'm somewhat new to raising chicks, this being only my third batch. Any ideas?
show more
5 years ago
chickens 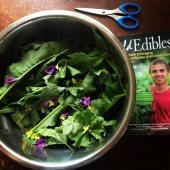 cassie's wild edible adventures (please help me ID)
The one that looks like hemlock might be hogweed. Not pigweed. Hogweed. Sometimes considered noxious/dangerous.
show more
5 years ago
wild harvesting
pigs as companion animals
I have pastured pigs and goats together for years & years with no problems.
show more
5 years ago
pigs

They were looking hard for "bee poison" at Walmart
This is exactly why I quit shopping at Walmart a couple years ago, when I was eliminating things from my life that pissed me off. Google news was the other thing. Two years without Walmart, one year without Google news, and I am in a way better place

Carpenter bees: LOVE!!! Ours just arrived a week ago, in all their bumble-y glory. They bore holes in the door frame of the garage, we stand by and watch them kicking the tiny frass (wood shavings) out of their burrows. I was assured by an entomologist that they were unlikely to do structural damage, and they absolutely do not sting or bite. They're so big my son calls them hummingbees.

We just love it when they position themselves at eye level and hover there, looking straight in our face.....like they're trying to communicate something. Ours are practically pets! The idea of killing them is appalling. When visitors comment on them, we say, "don't worry, they're carpenter bees. They work here."

under arm Deodorant alternative
So I ordered the magnesium oil from Amazon, here is my review:
First, it was unquestionably effective in preventing underarm odor. However, there was a pronounced sting in the area I applied it. I decided to keep using it to see if the sting would diminish after a few days, but it never did. The sensation was bad enough some days that I had to wash it off to end the discomfort!
Also, it was watery and tricky to apply,so I put it in a mister bottle. Then had overspray, which was messy because the stuff is kind of sticky/oily, hard to describe. I noticed it left a residue on the floor that had to be cleaned up with a wet rag. This messy overspray also got in my mouth

somehow, and that's how I know that magnesium oil has a vile, wretched taste.
Sounded good but not something I'll be using.