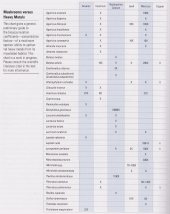 Neil Layton wrote:I am really concerned about some of the material in this thread suggesting that mushrooms may make heavy metals less biologically available. I've tried to confirm this and failed.

This is not, what I have said. I've said, that heavy metals in mushrooms are not available from passing through our digestive tract! That should not encourage people to eat mushrooms from highly contaminated soils, since chemical reactions occur rarely at 100%. The higher a contamination, the larger the risk, of course.

Some people tried to prevent basically whole (West) Germany after Chernobyl from drinking milk and eating mushrooms. Some caution might have been appropriate in the weeks after the incident - radiation was measurably higher in some areas of the country - but YEARS after it?

I don't think, there is any danger in our area from eating wild mushrooms, and was since 1987. It's ok to be cautious, but the media hype at that time was largely a Cold War thing.

Sorry, just discovered your post. Maybe the answer is interesting for others too... Styrofoam is not much different from natural waxes in its chemistry, it contains only carbon and hydrogen, nothing toxic like a lot of halogens. So, it's converted into the normal body fats, proteins and carbohydrates of the moth larvae. The only issue might be, when they eat ONLY styrofoam, that the larvae could suffer from malnutrition. But that could easily be averted by giving them some beeswax in addition.

Meanwhile there is a new discovery: Mealworms and "superworms", both larvae of beetles, can also digest styrofoam and polyethylene! Probably they have the same or similar bacteria in their digestive tract like the wax moths. Polyethylene is also a biologically benign plastic, similar to polystyrene.
show more
6 years ago
bugs
the deal with mushrooms.
Congratulations, Cj, on the Giant Puffball! Haven't found this one yet, only smaller puffballs (e.g. Common Puffball, Lycoperdon perlatum). If they are older, the solid white interior becomes yellow, loses its structure and is then not edible anymore. If it was still like tofu, I guess it was the right time for harvesting!


This field guide (thank you for the link, Bethanny) might be usable as a start. The instructions in the beginning are good and the photos a good lead, but the species descriptions are not sufficient to determine edible mushrooms. The authors warn on several places about eating uncertain mushrooms, but don't provide this certainty in determination. A feature that is present in the field guides I know, but missing in this one, is a segment about "mistaking possibilities" (I don't know if this is the best way to phrase it in English) on each mushroom page. There, species with similar appearance are mentioned and how to distinguish the two from each other. If I know "oh, I can mistake this mushroom only with this other one and these are the differences", it gives the necessary certainty to collect them. I admit, this is probably more difficult to achieve over such a large area like the US. Regional field guides might be more useful with that.


Some additional thoughts I had, when I flipped through the pdf:

- Nobody I know of is doing spore prints here, although the spore color is a good attribute. I'll pick that up...
In nature the spore color can sometimes be seen already before collecting, on material below the caps. For instance when mushrooms are growing in groups or tufts, on the caps of the lower ones.

- Among all the warnings about Amanitas, nobody seems to mention, that Amanita pubescens (Blusher, we call it Pearl Mushroom) is a very good edible mushroom. Not so much for beginners because of the scary sisters (or brothers, whatever

), but actually nicely distinguishable. The Blusher is growing more often in forests here, than all the toxic Amanitas together. "Blusher" is actually a very good name, because it describes the attribute that all the toxic Amanitas don't have: It becomes red on cuts, bruises and on places after pressure. Also, its cap has red areas on top, but a pale Fly Agaric can look similar, so the red blushed sites on stem and gills are the best way to distinguish it. No toxic Amanita blushes, their flesh stays white!
I'm collecting Amanita pubescens since I was nine (I had an excellent mentor at this time) and it is worthwhile, because they can become quite large and grow in every type of forest. In the US everywhere east of the Rocky Mountains, according to mushroomexpert.com.
There are two other edible Amanitas with gray caps (Amanita excelsa and Amanita vaginata), but they are harder to distinguish from the Panther Cap (Amanita pantherina) and I don't collect them.

- Also, they warn in the book strongely about the genus Cortinarius, which I can only understand as a warning to beginners. About 70% of this large group are edible species, a bit slimy sometimes, but often in beautiful colors (and the slimy skin can be stripped). I collect sometimes as an addition Cortinarius violaceus, muscigenus and mucosus. The taste of them alone is not great (a bit earthy), so it should be a mixed meal with other mushrooms. The danger to mistake Cortinarius traganus (which is only medium toxic, according to my books and wikipedia) or the two very toxic ones, Cortinarius rubellus and orellanus, for them is relative... It's a very large group though and definitely one of the more difficult ones.

John Elliott wrote: In this modern age, the Internet is our guidebook ...

So far, I find it easier to find a mushroom in a guide book, because one can flip through and compare with the photos. On an Internet site it would need a thumbnail overview like this one for butterflies and moths: http://www.lepiforum.de/lepiwiki.pl?Fotouebersicht_Schmetterlingsfamilien_8
I haven't found such a site for mushrooms yet. But the species descriptions on mushroomexpert.com are great, very detailed and with lots of photos.

show more
8 years ago
fungi
the deal with mushrooms.

Keith Hansen wrote:definitely buy a field guild and read it cover to cover. Learn all the poisonous ones and one or two good ones to start. collect them many times before you ever eat one.

Sorry Keith, but I think this is not gonna work (except buying a field guide). This way, no one will ever actually eat wild mushrooms... You start with curiosity, go on a mushroom hunt, knowing that the right ones taste much more interesting than the ones from a shop. You look for these few and know the similar ones, you could mistake them for. It is much more fun, to learn on the hunt from somebody else, than from a book. But a good guide book is necessary. On the way you learn to love the beauty and diversity of the wild mushrooms and the unexpected places, they appear on.
In the evening you come home with a delicious meal and the body soaked in oxygen...


(I'm sorry, if I sound condescending here. I have a slight problem with the language - when it is better to use "you" or "one". I'm only describing my experiences, so, no intent of patronizing...)
show more
8 years ago
fungi
fungi Identification: Images
Hi, the first one could have been for instance Leccinium griseum (edible) or, less probable, Tylopius felleus (inedible, bitter). No. 3 and 4 look the same to me, probably it belongs to the Genus Suillus (here in Germany are all of them edible). I'd stay away from No. 2. It's not much on it anyway.

Landon Sunrich wrote:Well sure if you want to get technical. More like 40 percent gut wretching and diarhia in my experience. Its that dead thing that gets ya. and I did say MAY

Oops, experience, I'm sorry... Had that only once, fortunately. Of course, I'm also in favor of knowing a mushroom very well, before eating it. The statistics doesn't help, when there is a very toxic one growing in abundance in an area... But knowledge helps, so I think it's good to keep the entry barrier low.
show more
8 years ago
fungi
the deal with mushrooms.

Just as John mentioned, I learnt my first mushrooms from my grandparents here in Germany, who went for mushrooms every year in August/September. It always was a fascinating weekend trip. Many people here are familiar with some basic species, they are certain about. These are mostly boletes, some agarics growing on wood (e.g. honey fungus) and some special looking mushrooms like cauliflower mushroom (Sparassis crispa) and giant puffball (Calvatia gigantea). Not so many people are confident enough to collect other agarics.


Here are the basic rules I have learnt:

- Only eat mushrooms you can determine as edible without any doubt (or consult an expert).
- Leave the other ones in the wood.
- Don't collect the very old ones and the ones, that are already out of the ground. (These are often partially rotten. The same applies, by the way, for mushrooms lain around in a shop for two days or more.)
- Don't collect too young ones, that are not safe to determine yet.
- Clean them, if possible, directly after collecting in the wood. (I never did that, too much work...)
- Collect into airy baskets, do not use plastic bags. (They rot fast after squeezing or having condensed water around.)
- Fresh mushrooms can be stored for up to two days in a fridge (airy, e.g. wrapped in paper) and another two days, after they have been cooked or fried.
- Never eat a mushroom raw, lots of otherwise edible ones are toxic in raw condition (not deadly, but can cause digestive problems).*

For collecting I think it is best to turn them out of the ground. This method does not harm the mycelium too much, in contrast to just pulling them out. Cutting them loose with a knife leaves parts of the stem in the ground, which act as an invitation for insects or bacteria to eat more of the mycelium.


For boletes (Wikipedia is good for following the section): Here, there are only two toxic ones (causing digestive problems: Boletus satanas, devil's bolete; Boletus calopus, bitter beech bolete; they have a light gray hat and red stem) and one inedible one (very bitter: Tylopilus felleus, bitter bolete; one small mushroom can ruin a whole meal). The others are all edible and taste usually great. The difference between the bitter bolete and the similar Boletus edulis (cep, we call them stone mushrooms, they look a bit like stones and have a nice, stable tissue) is the gray-pink sponge of the bitter bolete versus yellow-white sponge of the stone mushrooms. Also, tasting a small piece raw and spitting it out is not dangerous here.
Blue staining on cuts or on areas after pressure is not an exclusion criterion for toxic ones here in the area. There are some very good, edible ones that stain blue on cuts: Boletus badius (bay bolete); Boletus luridus und Boletus erythropus (in German Hexenröhrlinge = witch boletes), Boletus chrysenteron (red cracking bolete). The first three should not be eaten raw, though.
The two witch boletes have also a red stem like the devil's bolete, that's why most people don't collect them. But the stem has a different texture, and their hat is brown.
All in all, there is very little danger, when only collecting boletes and frying them. The worst that can happen is heavy puking after having devil's bolete, the second worst a very bitter, inedible meal with the bitter bolete. I guess, the boletes are somewhat similar in the US, but of course, please look up all toxic or inedible ones first. Probably there are some other ones to be careful about.


* I tried it several times with the cultured Agaricus button mushrooms and it seems ok, though. Here my concern would be bacteria from the growing medium (compost/horse manure).

An insect has caused tumors on my thimbleberry!
The damage on the other leafs looks like from caterpillars (moth/butterfly), much larger ones than the tiny larvae in the galls.
show more
8 years ago
bugs