Is it possible to survive long-term on just the three sisters?
Something to keep in mind is that it’s pretty easy to get enough leafy greens during the growing season, but not so easy during the dormant season.  They can be frozen or canned for dormant season use.  Or you can dry them and crumble the dried leaves into soups and stews.  I use a lot of dried parsley, as one example.

Perennial herbs can add a lot of flavor to an otherwise bland diet and keep you from getting food fatigue, and can all be dried.
show more
1 week ago
plants 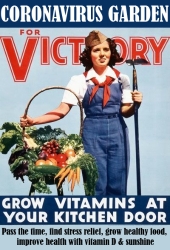 Victory Gardens! How-to, what to grow, and so much more!
This is for Gail, who was trying to decide whether to go camping somewhere with her bus for the duration.  I’ve been hearing reports of campgrounds being closed down, and campers sent away.  If you have a friend or relative who is willing to let you camp on their property, you should be fine, but camping on public lands right now is a no-go.

If you think about it, there are some good reasons for closing the campgrounds.  For one thing, most of them have facilities which have to be cleaned regularly.  People are hired to do that, whether it’s a campground manager, or a designated person who only does cleaning.  These people are exposed to whatever bugs the campers may be carrying (my grandmother’s last employment was cleaning toilets in national forest campgrounds on the Oregon Coast; she got amoebic dysentery from that job one year).  Also, if they close the campgrounds, then the employees can stay home and do the social distancing thing.

In addition, imagine if people in the campgrounds started getting sick with the virus.  They would quickly overwhelm whatever little hospital was nearest.

Better to shelter in place, and if you can, do the community garden.
show more
1 week ago
gardening for beginners

Is it possible to survive long-term on just the three sisters?
Someone with more mental energy than I have right now might try making a series of Punnett Squares for a human diet.  They are typically used to determine percentages of different feeds needed to make a complete ration for livestock.  You’ll have to look up links, because I’m on a tablet.

Hatch-a-Long 2020
I set some Icelandic chicken eggs starting on March 1 - there are a dozen eggs in the incubator now, but I started with five, and added the others over the next five or six days, so the hatch could be spread out a bit.  As soon as they are out of the incubator, I’ll set another batch.  I have twenty eggs on standby, and should have maybe another dozen by the time they go in the incubator.  I didn’t think of trying to get an Easter hatch; I wanted as many March-hatched chicks as possible.  They will be the most likely to lay all through this coming winter even without lights.

We also have chicks from the feed store, because I wasn’t sure what I would end up with from the few Icies I have left.  We should have a surplus of eggs by late summer, and that may be a very good thing this year.

Sweet Potatoes - the ultimate survival crop
Do you have any idea how long the seeds can be stored and retain at least some viability?  One of the weaknesses of potatoes and sweet potatoes is having to rely on easily-damaged tubers for the next season’s crop.  And if you lose a whole crop, but have stored seed, you could still be able to replant the next year.  And then there is the issue of disease transmission - less of that with seeds.
show more
1 week ago
seed saving / exchange / plant breeding

Sweet Potatoes - the ultimate survival crop
So glad to see your post!  We like sweet potatoes, too, and I want to grow some this year.  When you start selling seeds, please let us know - I’d like to get some from you!
show more
1 week ago
seed saving / exchange / plant breeding

Heartwarming coronavirus related stories
Hospitals are starting to ask for sewers to make fabric masks.  They won’t be used by the most at-risk personnel, but can be used in less-risky area to save the more effective masks for the people who need them most.  They want people to use at least four layers of tightly woven cotton fabric.  I have a good-sized fabric stash and am going to sort through it tomorrow and see if I have anything that would work.  I have some elastic, and plenty of thread.  Mentioned it to my middle daughter, because for a while she was sewing cute bags to sell, and she said she knows someone there who is already making masks.  They are needed for cancer patients, too, and anyone else who is immune-compromised.  So there is something useful that those of us who sew can do!
show more
1 week ago
meaningless drivel

Would love to hear your story of affording and finding land
I’ve had issues in the past with realtors who tried to sell you what they thought you should have, rather than what we knew we needed.  It’s very frustrating!  I had thought of getting a realtor’s license so I could be one of the ones who actually listens.
show more
1 week ago
homestead

Would love to hear your story of affording and finding land
Re-reading this thread, I realized that I hadn’t actually talked about how I found and purchased our current property.  I was planning a move two-thirds of the way across the country, to an area where I knew almost nobody (my oldest daughter’s in-laws live about an hour east of us - I looked first at property near them, hoping to make it easier on daughter and her hubby to visit both of us when they come down from Ohio.  Additionally, there is a member here who turned out to live practically a stone’s throw from this property, but I didn’t know that until after I’d purchased it.).  With an extremely limited budget, I spent many hours poring over real estate list8ngs on-line, and visiting Google Earth.  The latter was invaluable, because it let me eliminate a lot of unsuitable properties.  Some were right on busy highways, which was undesirable for a number of reasons.  A couple had close neighbors, including businesses, which didn’t show in the pictures in the listings.  Some were in active flood zones (there are a couple of towns in Kentucky which have flooded badly in recent years - property in the flooded areas was very cheap!).  The setting where you can look at the topography from the side let me eliminate some places that were at the bottom of ‘hollows,’ and would get little to no sun in the winter.  I couldn’t discover every undesirable feature that way, but it did let me thin things out.

Then I made some appointments with realtors, flew out here (leaving my handicapped youngest daughter home with the fifteen-year-old granddaughter - my mother spent the nights with them, and was only a few miles and a phone call away), rented a vehicle, and started further winnowing.  I almost didn’t even look at this place, because the morning I’d planned to look at it, the rental car broke down, and I had to cancel the viewing.  But when several more days of looking hadn’t turned up anything I really felt good about, I contacted the realtor again and made a new appointment to see this place.  Love at first sight!  Oh, it isn’t perfect - the house still needs a lot of work (I’ve already had the plumbing and wiring completely re-done), anf the fencing around the property keeps the neighbor’s cows out, but won’t hold dogs or goats in.  But we are well off the ‘main’ road, nearly half a mile back at the end of a dead-end spur road.  It’s private, with only one neighbor house visible from our place.  The house is small but plenty for my daughter and I (granddaughter went home to live with Mom shortly after we moved here).  We have two barns, plenty of land for a garden, a small pond, some trees, and room to plant lots more trees.  And it’s beautiful here.  All for $46,000, which I was able to have completely paid off within two months after signing the papers.  Perhaps more important, people here are great.  I’ve since talked to several other people who had looked at the property, loved it, but for one reason or another decided not to buy it.  I think it was meant for us!
show more
1 week ago
homestead