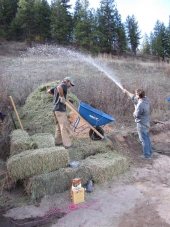 hot water from a compost pile

Heather Staas wrote:
Fascinating. More research needed.. off to follow the links and websites in this thread...

Same here.
I know compost has been successfully used to heat a green house in Canada and a compost pile successfully used for human showers in the PNW.
I would think the optimal solution would be to use the compost derived heat to generate electricity and then simply use as on-demand water heater when the showers were wanted. Most showers would be in the early morning and the afternoon at the end of a work day. Why heat an outside watertank at other times.

No compost in a full-farm eco system...

TCLynx Hatfield wrote:Well just because the farm might not have "compost Piles" doesn't mean the farm doesn't have compost.  Organic Mulch is essentially composting.  Anything organic you drop on the ground will eventually break down.  So mulching is composting.  Letting the chickens have a garden bed for a season before moving them on and growing a cover crop is composting in a sense.

Nature composts all over the place, farmers often obtain benefits by composting in specific locations. Compost piles generate heat, so showers, green houses and animal shelters often benefit from concentrated compost piles rather than random deposits by wandering animals. The Quaker Barn had entrances at each level so the farmer never worked against gravity to put hay up in the hayloft and then fork it down. Animals walked in on the middle level and their feces fell to the lower level often with the aid of the farmer. The heat from the lower level kept the barn warm and the animals in one place.

Its our human intelligence that lets us wrap some metal heat-exchanging tubing around the bottom of the compost pile and then turn on the garden hose for a hot shower. Animals on their own are rarely like to do such things to benefit us, but its ALL composting. Even our digestion of food is composting on a more rapid scale.

Xisca Nicolas wrote:Some diets are very close one to the other, which I believe is the case with paleo, GAPS and Wahls diets.

I would like to discuss about their common points, and then their differences, may be to help decide what to do...
...
Whoever wishes to correct and complete this is more than welcome!


I'm still learning the various diets but feel that comparisons can be difficult and at times misleading, or perhaps even dangerous.

If you look through old photographs of travelers in the American West you often see men depicted with vinegar bottles. Travelers who of course would be uncertain of their diets often carried there own vinegar, mustard and beet sugar.

Any individual item has probably changed over time. Unless you are using heirloom seeds or something most of our food products have been "genetically" shaped by manufacturers. I don't mean artificially necessarily, just shaped by constant selection for size and shipping. A present day peach would have thirty percent more fructose in it than a peach of similar size.

Also foods used to be described by time of the year. Nettles were often recommended for teas, soups, salads, etc. but only at certain times of the year. The differences are obvious since Nettles are also known as Stinging Nettles. Much knowledge was passed down in rhyme and aphorisms but precise meanings have been lost. "Starve a cold, feed a fever" is sometimes interpreted as advice, but more often than not it is correctly interpreted as an admonition: if you starve a cold you will be feeding a fever.

tel jetson wrote:you could always take up cooperage and make some yourself.

Rather than learning to be both a cooper and a wainwright, it might be easier to contact a large Science Supply firm that can sell you a wide variety of glass flasks and bowls. One advantage is you can order them graduated, that is with measuring amounts indicated on the glassware. They are built to withstand the effects of acid so there would not be any leaching, however this would also avoid drawing in a good many flavors that you might get if you did actually use barrels.

Sales such as that at the Pasadena, CA farm are known as "high end" sales and are in an area where Community Supported Agriculture is well known.

High end sales are such things as a chef from a locally famous restaurant dropping by for some fresh "X". Yes. It happens. After you've built a relationship and reputation. Sales will still be in commercial quantities with commercial sizing and bunching. The local chefs all want one thing: something FRESH, well packaged and labeled and immediately usable by them. Fresh high quality garlic? Fresh spices? Sure, but whether its chef or chef/owner he will approach it as a business transaction. Fast, simple, sufficient quantity for large numbers rather than a small dinner party. Most chefs value their already existing relationships so it will take time to develop new contacts. All chefs value a place that delivers when promised. Don't ever tell a chef 4:00pm and get there at 5:00pm. Chefs can not run restaurants like that.

A better "guide" for figures is the CSA data. Community Supported Agriculture can be families or small institutions that buy a share of a farm's forthcoming output. And its the packing and distribution time and costs that are important. Many farms distribute through off-site distribution centers such as a community center. This price data is more easily available and produces less rosy forecasts than just the "high end" sales data.

Your output is uncertain. Satisfaction with its quantity, timing and variety is uncertain. At least in certain areas of the country it helps to supply occasional recipe ideas for certain crops. Particularly for beets... you will find your customers often really don't know what to do with them. Long ago, food coops distributing to the urban poor always had various limitations signs when they opened, but when it came to closing time there was always a large sign proclaiming No Limits on Beets.