Better World Book second printing, pre-order dealio
Id have to read it before seeing if Id buy 12. If it can really change the world and not just another slightly different take on permaculture then hell yes Id buy 12 and give them out for XMas. Terrific idea! Make them cheap if you can. gonna order one now. Thanks
show more
1 month ago
tinkering with this site
Rat Control
So we have runner ducks and Guinea hens and we feed them during the day. We put the food inside the enclosed, (outside the coop) run but leave the main door open because they free range, coming back to coop to eat and check in. This has worked well so they know where Home is and lay their eggs consistently inside. We want the birds protected while eating, from predatory birds...We put the food away at night. The rats are out of control now. I used to catch one here and there in the have a heart traps but then I would have to relocate the darn things and thats not cool, giving another place rat problems...so I bought 3 new rat-kill-traps and bam the first night caught 2, second night, caught one.....then Nothing! I have cleaned the traps, letting the traps air out, etc thinking they smell "death" on them and thats why they won't go near them, but no matter the bait, we get nothing (except the occasional small wild bird or squirrel using the no-kill traps).  I have put peanut butter, bacon grease, even sausage, pepperoni...but Nothing! They won't go near the traps! They know they can get a free meal going to the bird feeder! I went and bought brand new traps and the guys at the hardware store laughed at me, saying they reuse their traps till the springs are falling off. Just with baiting a little pepperoni. I tried it! Nothing! what the heck. I sometimes change it up and put the birdfeeder outside the coop but then squirrels get to it. and its open to hawks, etc flying over....  Rats rats rats! I think its the bait?! Why are they not attracted to most any bait anymore?? thanks!
show more
3 years ago
nibblers
Guinea keets play time and treats in brooder
Hi my two week old keets seem healthy but can I throw some weeds with seeds in there to keep them occupied? I train them with millet which is working well. But do not want to throw that in there. Ive searched for things but not coming up with much. i just see millet millet millet. At this stage what else can they eat. I live on a big organic herb farm. lots of choice. thanks! also what do people use for bedding. I now ran across NOT to use hay or straw which is what i have been using and no pine shavings. what else is there...
show more
5 years ago
chickens
Free Indian Runner ducks-Portland OR area
My boss ordered way too many ducklings for this farm. 27, although we lost one. I would love to reduce this flock by half. Anyone in the Portland/Sandy OR area want to pick up a few??? They are straight run, healthy and going on two weeks old. 26 is just too many!!
show more
5 years ago
ducks and geese
Pruned trees dying where cut
hey Miles, i will try, just got a new phone that my old computer doesnt recognize..I will try. I have had a second look and it doesnt look as bad now. Two of the trees the leaves are growing on pruned branches and the other is the same excpet there is curling and blistering on the leaves. I will try to get some pics to ya.... thanks
show more
5 years ago
trees
Pruned trees dying where cut
Hey there. I pruned ALL the smaller 3-4 yr fruit trees on our farm earlier this winter. We had a warm winter and decided to get a good start on pruning... I was so proud and trees looked so good.I imagined them full of leaves and full of fruit.I also had just come back from a Permaculture Meetup in our PNW area on tree pruning even though I knew mostly everything we talked about and have pruned many trees in my years.... I disinfected my shears etc. Now We noticed that the trees look like they are dying and the branches where I cut are definitely showing signs of unhappiness. This is not good. I can't lose all of these trees! The manager says I cut them wrong and they were too young to cut, that the last manager cut the gingkos down below at this age and the same thing happened.... I did minimal pruning to establish proper branching. I admit some of the cuts are bad angles (horizontal) where water can accumulate and possibly go down into branch. But I knew enough NOT to make cuts like this and tried not to. Now this sloppiness on my part may cause the trees to die. ?!?!!! many of the cuts are good angled but it Looks like some kind of disease. It may have been wet/raining the day after pruning. Is there anything I can put on like an antifungal decoction of some sort? should I cut of bad parts? argh.an info, advice...
show more
5 years ago
trees 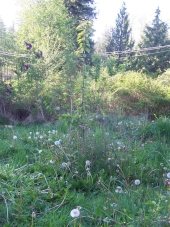 Help me prune/fix my misshapen little deer-nibbled discount fruit trees
I would plant comfrey and garlic chives around base of all tress to help with "weeds" I do not consider dandelions weeds and can they help, like comfrey bring up nutrients from the deeper soil. grass however does compete... so my pla is always to plant OTHER things so grass doesnt grow there. mulching is fruitless and can be low maintenance...until another year or two when the grass grows through. plant guilds so no weed wacking is needed and such bioaccumulators can be chopped and dropped at the tree base! much less work! much better for tree!
show more
5 years ago
trees 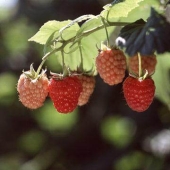 Everything about raspberries
I have moved onto a farm where there are six rows of 75 yds of neglected raspberries. They are in full sun, depleted, compacted soil. look slightly yellow. I noticed the deer have been pruning them till now. Grass isgrowing all around them. I pruned out all spindly and dead canes and left more sizeable canes. It needed some heavy handed pruning...much better now. I think they will fruit better next year? we will see. In between the rows is grass. Looks like they had put some hay down as weed barrier but alas it has decomposed. I have read about wood chips for mulch but I am not positive the farm can afford this, unless I can find some for free?. I need to mulch or plant something as a groundcover in the rows under them to stop the grass from taking over again. What has been tried?
show more
5 years ago
plants

rooting hormone/help-organic of course!
I don't readily have access to willow, I guess I need to go hunting around. They don't seem to be as common here in the NW as they are in the SW or NE US as I knew them to be. Thanks all!
show more
5 years ago
plants

rooting hormone/help-organic of course!
What's a good rooting hormone for organic practices. I have read willow branches in water. Any other tried and true methods out there?... looking to root herbaceous and woody materials.
show more
5 years ago
plants