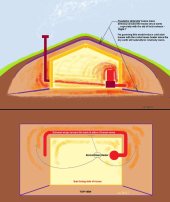 Rocket Mass Heater_Walls of earth home as the Mass
I think it is going to be a wash either way. I am very familiar with John Haits work and I think your idea would work very well. However, RMHs are notorious for burning out. Do you want to have to open up an earthen wall to do maintenance over the years? I also think it would be very difficult to manage as far as what time a year you were firing off the RMH to heat load the walls so that the thermal flywheel is kicking in at the right time. You may end up with a steep learning curve trying to strike a balance between comfort, efficiency and convenience. Haits idea was to thermally load the earth by keeping it dry, but the heat came from people just living there along with some passive solar. I would be inclined to centrally locate the RMH in the house and run a PEX based heat exchanger in the periphery of the RMH to be able to control where you want your heat to go. That way if you have temp monitoring like Hait did, you can see if you are pumping too many BTUs directly into the outer walls. Otherwise, you can radiate and distribute heat via the floors which will not only make things more even, but also increase the area the heat is applied to. I am playing around with a lot of similar ideas to yours, so I'd love to bounce ideas back and forth. I think a hybrid system is what I am aiming for. I want to be able to combine geothermal groundloops, RMHs, "hot" and "cold" water reservoirs, and evacuated tube solar heat to make something similar to what you are after. I envision an underground home with a little more control over the hot and cold and zone heating/cooling.
show more
3 years ago
rocket mass heaters
Living on a Slope
I applaud what you're doing and it sounds like a neat properety, but for me the HOA would be a no go from the get go. I am looking for properties in Montana as well, and if I see even the slightest hint of HOA, the property is immediately dismissed.
show more
4 years ago
homestead
Timber frame structural calculation
Does anyone have a good reference or resource for figuring out what loads different timber based setups could support? I know there are plenty of timber frame books out there, but so far I haven't found a lot of info for calculating what loads they will take. Ultimately I will consult with a structural engineer for final review of my plans, but I am the kind of person that really likes to know what is going on with everything I am involved with so I can speak with the engineer intelligently about it.
show more
4 years ago
roundwood and timber framing
Thermal mass heating
If you haven't already, you may want to look into PAHS, or Passive Annual Heat Storage. By insulating underground, they are able to retain heat captured in the summer months and raise the average temperature of the surrounding earth (thermal mass). I am thinking of even taking it a step further and using solar concentrators to heat water in the summer and circulate it into the mass to boost it further. You could conversely also cool it this way if need be. PAHS and geothermal are two of the most efficient climate control systems out there because they both use thermal mass as their "battery".
show more
4 years ago
wofati and earth berm

Battery Bank Life Span
The Tesla powerwall battery system looks promising as well. Both Tesla and Aquion offer pretty good warranties on their products. Tesla has a 10 year warranty, but I can't find where it says what kind of warranty. Aquion has upgraded their warranty to 8 years(5 full replacement and 3 pro rated). Aquion seems to the more eco friendly version, but the Tesla seems like it may be the better deal for dollars per kwh. Aquion seems like their batteries may be more abuse tolerant and can in fact be discharged all the way. I don't think Teslas can(or they would probably be advertising it). I think a combination of the two is what I am going to shoot for. This CNN article http://money.cnn.com/2015/05/01/technology/tesla-home-battery-price/ states that the average home uses 943 kwh per month. Divided by 30 days=31 or so kwh per day. The Aquion M110-LS83 stack alledges to be pretty close to this, but for $15K you can probably be pretty deep in golf cart/forklift batteries.
show more
4 years ago
solar

net worth
That's a thing of beauty.
show more
5 years ago
financial strategy

Uses for oak
One inch rough sawn green white oak planks are often quoted as being the best decking material for slate roofs. I am planning on building up in Western Montana, and I am not feeling excited at the prospect of trying to track some down out there. Good luck!
show more
5 years ago
woodland
What the heck vehicle do I get?
Isuzu VehiCROSS

What pickup truck would you choose?
I have a 1993 Dakota. I picked it after reading countless owner testimonies of the engines lasting well into the 3-400,000 mile range. The transmissions don't last quite that long, but the 318(5.2L V-8 ) engine has been produced by Dodge for longer than just about any other engine they make. The truck has more power than a 4 or 6 cyl Toyota, but doesn't guzzle nearly as bad it's larger V-8 brethren. It has an 1,800-2,000 lb. payload capacity with the V-8 and can haul up to a 6,400 lb trailer with the correct gears. Mine is the extended(club) cab. While bigger than the similar Toyota or Ford Ranger extended cabs, it isn't something you'd want to have to sit in if you're a full sized adult. The front seat on the other hand has room for days(I'm 6'0"-200 lbs.) For kids, dogs, groceries, or general stowage though, it works great. The bed is 6-1/2 feet IIRC so a full grown person can lay right down in it. A full 4x8 piece of plywood or drywall doesn't stick out much past the tailgate(down). My only gripe is the oil filter being in about the worst position you could possible imagine. If you change your own oil, be prepared to either buy a filter relocation kit and install it with your first filter change, or end up regretting that you didn't take my advice(seriously, it's that bad). Another truck I'd personally recommend is a Jeep Comanche. It's lighter(like a Toyota) but has an inline 6 cylinder engine which puts out an awesome amount of torque and horsepower. It's a tad light for serious farm type work, but it always gets a solid 20+ MPG and never seems to lack for power. The 4.0 motor also has a reputation for lasting well into the high 200's to low 300,000's of miles.
show more
6 years ago
transportation
Water versus cob – thermal storage
It seems like running a water jacketed RMH with a small pump through a radiant floor system would serve a similar effect as the cob bench, but over your entire floor(s), thereby making everything fall closer to that just right level of comfort. PEX tubing will hold together up to at least 250F so as long as the system was appropriately sized you could get your Rocket Slab Heater to more evenly distribute heat through your place. If you ran a coil of copper or stainless tubing inside the water jacket(to the pump) and insulated the exterior, you could control when you wanted to tap off of the bulk heat storage and distribute it off for different uses or times as needed. You'd pretty much be making a hybrid hot water heater/radiant floor/zoned central heating system that you could still cook on. You could even tap into it for deicing/defrosting applications. Hot water heaters are one of the biggest(~17%) drains on household power. That's 17% less solar/battery power needed for most people. Plus its one stop shopping. Just plumb it in to your homes existing hot water system along with some thermal protection of course.
show more
6 years ago
alternative energy