food forest confusion
OK, I think I'm getting the idea a bit better, thanks to all these explanations.  Being Asperger-y, I have a tendency to take things too literally.  So yes, I was thinking of "real" forests, the kind I remember back in NY, or the ones we have here in California.

So, food forest is basically semantics.  It's really more of a modified, complicated orchard with an understory of more than just grass.  And as I suspected, annuals are pretty much a no-go, which, in a temperate climate, leaves out staple crops like grains and tubers.  Seems like, for it to really work well, you need quite a bit of space.  Sounds like if being able to feed yourself when TSHTF is your main goal, a regular type garden would be a better use of a small plot.  A FF would be good in more marginal area, like on a hill or where the soil is rocky or poor.  Sort of what they used to call a woodlot.  You could coppice/pollard a lot of trees to open the area up, and use that as firewood, meanwhile planting in small fruit trees and berries.

I think some areas would be better than others for this, if human food is your goal.  Here in California, we get no rain for most of the spring and all of the summer: 6-8 months dry.  And the native vegetation is mostly adapted to that, but it's also very sparse.  Think Oak savannah.  The places along the coast that get a lot of fog have a few berries, but not a whole lot in the way of edibles.  You'd either have to water the whole thing, or live on acorns.  Watering all summer would probably kill the native oaks, if you have any.

If you have a bare area, olives and grapes might be a good idea?  Altho I don't know of any traditional people who grow them together---don't grapes need full sun?  Would they produce growing up a tree?  All the Mediterranean food plants I can think of need a lot of sun.
show more
1 month ago
forest garden

food forest confusion
Hi all,
Can someone explain to me the whole concept of a food forest and how it works?  I just don't get it.  I understand about fruit and nuts and berries.  But aside from those, you really can't find a lot of food for humans in a temperate forest.  The things we eat need sun.  Even most animals need "edge" to survive.

How in the world can you grow most of your food in a forest?  I watch videos, and I see people planting vegetable between tiny little fruit trees, and calling it a food forest.  But when those trees grow, they'll be too much shade to grow most vegetables.

Is this whole thing an overrated idea that just doesn't work in the real world, or am I missing something?  Anyone out there actually have a food forest that produces most of their food?
show more
1 month ago
forest garden 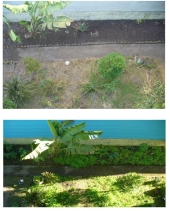 Anne Miller wrote:Have you tried planting a native variety for your area?

I have no idea if native would be in the form of dwarf trees.

I have been putting in a lot of native plants, especially flowers, for the bugs and hummers.  (I'm in San Francisco).  Problem is, the yard is very narrow, so I want to keep it to smaller trees.  There's an elderberry that was at death's door when I took over the garden 2 years ago.  It's still not doing very well.  I can't think of any native trees that give fruit!  I'd really like to get something to eat.

Here's some pictures of the yard from 2 years ago, when I first started cleaning it up, and then a year ago.  Orientation is north-south the long ways.  Only the north end is open.  The tree will go where the black compost bin is in the last pic.
show more
2 months ago
fruit trees

Tereza Okava wrote:No fig, huh? Crumbs. We have similar weather here and they do well, but I have no idea what cultivars we have.
How about persimmon? It might be a smidge warm for it there (we are in 9b and it's perfect for them) but they are pretty resistant to conditions like mist and wind.
Another option, maybe off the wall, is kumquat. Mine pretty much goes to sleep for the winter, they stay small, they like good drainage.
Last maybe loquat. They're also tough as nails.

Loquats do well here.  Persimmon...hmmm... maybe a Japanese variety?  A lot of Japanese plants do well here.  Do they need a lot of water?  We get no rain at all for 6-8 months of the year, late spring thru early fall.

Figs grow, but they never seem to ripen their fruit.  Just not enough heat in this place of wind and mist.
show more
2 months ago
fruit trees

Fruit Tree for backyard
Hello all,
I need ideas for a dwarf or semi-dwarf fruit tree for my back yard.  It's a difficult location.    I'm right at the beach, so it's extremely windy in late winter thru spring.  Sandy soil.  The BY is surrounded on 3 sides (E,W & S) by 3 story buildings, which means the best spot gets about 4-5 hours of direct sun a day in summer.  Almost none in winter.  I'm in zone 10b, which gets very little winter chilling.

I know that peaches, nectarines, apricots and pluots don't do well here.  Neither do pomegranates or figs.  They just won't fruit.  I think it's too cold and foggy in the summer and too warm in the winter.

We have apples and pears at the community garden that do OK, but it's not as windy there.

Lori Ziemba wrote:Specifically, I'm interested in how people in Greece, Italy, etc. grew tradtitional crops like olives, grapes, carob, chestnuts, pomegranites, figs without irrigation in the summer.  Or did they rely on irrigation?  I'm having a hard time imagining they had the resources to irrigate large orchards, vinyards, etc.

Anyone have knowledge of this?

We have about 20 very ancient olive trees and a couple of old fig trees in addition to the new trees I planted.

Some of the old olive trees will produce medium sized olives, but others will only produce tiny olives that aren't any use. It's a hill-side property with a few fields in the valley. The trees that produce sizable olives are on relatively good soil at the bottom of the valley where a little brook runs when it rains during the wet season.  They will produce olives without irrigation even though the soil usually stays dry from April/May thru October.  We don't get any rain during the summer. However, the same trees wouldn't produce any olives if they were just a few meters up the hill. Thus, it really depends on your soil.

There are two farmsteads on our land, each farm house had a big fig tree that used to produce large figs while people were living there; however, after the land was abandoned, the trees only produced tiny figs that aren't edible. In other words, while people lived there, the trees would get water even if they weren't specifically irrigated.

The only tree that still produces many fruit is a huge carob tree even though its on a dry hillside and doesn't get any water whatsoever.

I don't specifically irrigate the olive and fig trees I planted; however, since they are part of my vegetable garden, they do get water when I irrigate my vegetable plots. In a particularly dry year, when I don't have enough water to irrigate the vegetable plots, these trees may still produce small fruits, but the figs will loose all leaves by August.


Thanks, this is interesting!  Do you know what your average rainfall/year is?
show more
9 months ago
permaculture

I’m just east of Redding, Palo Cedro/Oak Run. Our average rainfall is near 40” a year. Just a short 20 minute drive to Red Bluff and the average falls 10” to about 30” per year.

Is it fire prone there?
show more
9 months ago
permaculture

I wanna hear from the Western Drought-Stricken Permies

Jay Angler wrote:
My friend who knows much more about ornamental plants than I do, says that just as we are capitalizing on the "leaky" nature of terra cotta pots when we repurpose them as ollas, if you put an ornamental plant other than a cactus in a terra cotta pot, you will find that it will dry out faster and be more inclined to be hard on the plant's roots. Is she right?

Oh, OK!  I thought you meant they weren't good for ollas.  Yeah, she's right.  I only use them for cactus, and not even all cactus.  They dry out too fast.


this is one area where showing you are willing to listen and try to fix a problem could be an opening for other neat things you could encourage them  to copy - like your ollas for water conservation!

Well, I don't want mosquitoes, either, since I'm allergic to them.  But yeah, point is, there's always that one person who complains about everything...

What kind of chestnuts do you grow?
show more
10 months ago
conservation

I wanna hear from the Western Drought-Stricken Permies

Plain Terra cotta will seep water - this is good for some plants in some climates, but I actually find that in our dry climate, they're not the best for most plant situations.

Hi Jay,
Why is that?  They're made for dry climates.  I have found that some pots don't seep at all.  The water just sits.  I know real ollas are made of a certain kind of clay, and fired at a certain temperature, to make them porous.  I'm guessing that the few I've had that didn't seep may have been fired too high.  No worries, I just replace them.  There are always pots lying around here.


The fact that they can't stay out in the winter is a draw-back to using them also.

But I expect most people just pick them up in winter.


I'm not sure what the purpose of Lori's rocks are, but I'm assuming she's in a windy spot?

It is windy here, in the spring, but that's not what the rocks are for.  Raccoons were removing the plates!  Or maybe possums.  At least, I think it's raccoons.  Could be the homeless.  I would go up there (it's a community garden, about 2 miles from my house) and ALL the saucers would be off, sitting neatly next to the ollas.  It took me a long time to to figure out that they were probably smelling the slugs that crawl in there, and eating them!  I would leave them be, but other people would complain if the ollas were open, because of mosquitoes.  Seems like there's always someone there who will complain about what I'm doing... sigh.
show more
10 months ago
conservation