Call for interviews
Just posted this article on my blog: http://www.otherthingstobe.com/an-alternative-pathway/

"One young woman whom we’ll call Bright Sky (a name she received while spending a month on the Ojibwe reservations during her college years) began to rethink her future when she graduated from Penn State in the summer of 2009, shortly after the worst financial crisis since the Great Depression began. “I didn’t think about it until years later,” she says, “but that transition period is very likely the reason I chose an alternative pathway.”

Bright Sky has forged her alternative pathway by a nurturing a strong interest in stewarding the environment and by getting educated in permaculture, a system of agricultural design principles that mimics the patterns found in natural ecosystems. Developed in Australia in 1978 by Bill Mollison and David Holmgren, permaculture is made up of many disciplines, including gardening, energy, architecture and community building, and is now practiced throughout the world as a path to sustainable living. Years before hearing about it, however, Bright Sky’s journey in this direction began with a unique learning experience that inextricably connected her to nature." 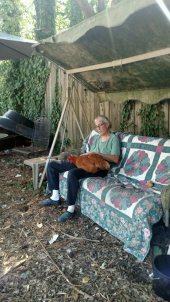 I'm a beginner looking for resources
Thank you for the responses, everyone. Tracy, I have been searching for online work that would allow me to work from wherever I wanted to live.

David, I'm living in Connecticut temporarily. I have basic gardening skills and would like to improve on these and acquire skills in natural building.

Virginia, your plans sound very interesting. Are you looking for paid help? How many people are there right now?
show more
3 years ago
financial strategy

A hopeless romantic hoping to find a partner out there.
Hi Garret. Thanks for sharing this with us. I'm considering moving to Eugene and it would be nice to have a friend in the area. I'm not looking for a romantic relationship right now, but you seem very nice and I think we could be friends. Let me know if you'd like to chat sometime.
show more
3 years ago
permaculture singles

I'm a beginner looking for resources
Last July I left my job and apartment in NYC to WWOOF on permaculture farms. I am now almost out of savings and would like to know how to find any opportunities to continue my skill building that would pay money in exchange for my labor. Also, I've read posts on here that talk about finding an older person who needs help with their land and would be willing to teach someone new to farming. If anyone here knows of opportunities like that or ways to find them, I'd appreciate hearing about them (I realize some of these won't pay a salary but would still like to know).

I'm at a crossroads right now where I need financial security but hope there is a way to not have to give up on this journey and go back to working in an office. If anyone here can help with that, I would be most appreciative. Thanks.
show more
3 years ago
financial strategy