Beautiful Permaculture For Front Yard Gardens
Wow! Would love to see the photos (not sure how to help with the links though

) but that sounds like a big and very exciting project!

As poster above says, might be worth trying to timeline it out and delay some things a bit to give yourself a slightly easier time of it... Even on a much smaller project I thought I had my garden all planned out but 3 years on I'm still adjusting things as I go...

Really great ideas though & will be amazing once it's established!
show more
7 years ago
urban gardening 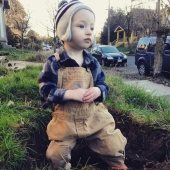 Nate -- to be honest I take pretty much the same approach, but I know some folk worry more. Like you I'd rather do positive stuff than fret too much about what I can't (short of moving a long way away, which is not a realistic option for us right now) do anything about.
show more
7 years ago
projects 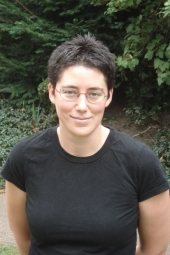 Really interested in seeing how 5 gallon buckets might be used for apartment balcony situations. Did some consulting with an inner city collective that were using them.

I've used similar but slightly smaller buckets to make self-watering containers -- I used florists' buckets as a place near me sells them at 10 for £1 which seemed moderately irresistible. I think anything like that can be a great container and even better if you can find a way to stack them to create a reservoir for watering.
show more
7 years ago
urban gardening

Welcome Juliet Kemp author of Permaculture in Pots
I don't know if it's "done" for the author to comment on a review thread so I will say here that I'm very glad you liked it, Burra, and thank you for such a thorough (and complimentary

I have a cherry in a pot, and I know folk growing apple trees in pots. In a warmer zone, though.

Can you back them against a south-facing wall? The Victorian UK kitchen gardeners used to create micro-climates with south-facing walls and well-protected walled gardens, and grow warm-weather fruit that wouldn't have survived unexposed. I think they may also have protected the trees in the winter. You could wrap up pot and trunk in something (I like bubble-wrap though it is not breathable)?

(This is largely theoretical suggesting; it doesn't get that cold where I live.)
show more
7 years ago
urban gardening

Water retention in container gardening
Ooh, I like the different sides of paint idea! I guess that wouldn't work if you were 'stacking' the plants in the containers though. (I've sometimes grown a tall thing at the back of a container against the wall and short things in front.)

Thanks Galadriel -- I might give that another go this summer as I too hate repeated daily watering.
show more
7 years ago
urban gardening
what type of soil?
I've found that established plants are a lot more forgiving in terms of soil than seedlings. One year I planted a bunch of seeds in the very coarse 'soil improver' compost I got cheap from the council recycling plant, and they did very badly indeed. (In fact that compost is pretty rubbish all round; some plants tolerate it but it does better mixed in with other things.)

Having said that, I've found that any fairly fine compost/soil that hasn't dried out (if you leave pots unwatered for a long time the soil can go very dry and dusty) will do the job for seedlings. Do you make your own compost? You can sieve that out and use the fine crumbly stuff that comes through the sieve for seedlings, although beware of rogue seeds from other plants that went into the compost pile.

If you need to buy soil/compost, in theory both seedlings and bigger container plants will do better in dedicated potting compost. If you're buying 'general mix' (non-peat!) potting compost, you can mix it up with other things to get a better potting compost; this is the one I suggest in the book:

More often I've mixed general mix compost in with old potting compost, my own worm compost, and a bit of sand when available. I've never had the option of mixing in garden topsoil but my mum who has a nice big garden starts seeds and plants them on in a mixture of garden soil and compost and gets on well with that. The more established the plant I think the lazier you can get away with being.

I would certainly use that mix for both starting seeds and growing them, but I think for starting seeds especially this is something that gardeners will happily disagree on... If you've had good luck with a specific mix for ornamental seedlings then give that a go.

That's for veggie planting in pots; I don't however know if ornamentals would need something different as I know very little about non-edible plants I'm afraid

My guess is that the potting mix above would be fine but I don't know if those have different requirements. I'd guess that you might have to wait until next spring before you plant them for them to stand up to being transplanted by the owners, but again I'm not entirely sure. Personally if I was taking a cutting of an established plant I would tend to keep it in its pot for at least a few months and possibly pot it on once before putting it in the ground.
show more
7 years ago
urban gardening
Newbie to this!
Well, I don't know exactly how it works with moving around in the military, but one of the neat things about container gardening is that you can move your garden with you when you move house

show more
7 years ago
urban gardening
Decorative Container Gardens - Making them Useful!
It's not something I really cover in the book I'm afraid, but I absolutely think that things can be both decorative and useful

Fennel is pretty. Courgette flowers are gorgeous but admittedly they're only pretty for a brief while. Nasturtiums, marigolds... Mint and rosemary smell good as well as being edible (and rosemary has pretty flowers when it flowers, and is both medicinal and edible). I think tomato plants are pretty but I may be alone in this.

I do like multiple functions -- a garden (whether container or otherwise) should be a place to feel good in as well as to produce food. What 'feel good' means to different people varies, of course -- I don't really care for flowers that aren't also either edible or useful, myself

but other people feel very differently and that is fair enough!

You can also decorate the containers themselves!

I will come back with more ideas; my dinner is ready

show more
7 years ago
urban gardening
Protecting pots from cold in winter?
Partly, I cheat, and live in an area where it rarely gets properly cold. (I live in London, UK, which is a heat island of itself, as well as the southern UK being pretty temperate anyway). I don't think we've had below-zero temps this year (I've only seen a frost maybe twice) and we probably won't now. That's becoming more usual, which is another post altogether, but even 30 years ago when I was small, and lived a bit further out in the suburbs, -5 deg C was rare and considered Really Very Chilly Indeed. Those of you who live in places where it gets actually cold can now laugh at me

I also avoid growing things that need much tender care, because I am a very lazy permaculturist. So my current approach is to leave everything as-is and hope it survives. I have such a small garden (and I am really so very lazy) that for me this is a reasonable way to find out what is the best fit for my conditions.

Having said all of that: I have in the past had plants I was more worried about and which did need protection. I've used bubble wrap (around the pot, around the trunk of the plant if it's the sort of plant that has a trunk, and over the soil; make sure there's a bit of a gap right around the base of the trunk to avoid it getting damp and rotting). I also use the thermal mass of the house -- more delicate plants go right next to the house against the south-facing wall.

I heard, on the radio show Gardener's Question Time some years ago, in a discussion about satsumas, that the real risk isn't *cold* so much as it is *cold and wet* -- that it's the water that's more of a problem. They suggested keeping pots dry over winter. I'm not sure how well this advice stretches to plants that aren't satsumas, but it might work for anything that expects to hibernate over the winter?

Can't offhand think of any solutions to mulching without also creating cover for nibbling beasties :/ though just insulating the pot might help and wouldn't provide much cover?
show more
7 years ago
urban gardening