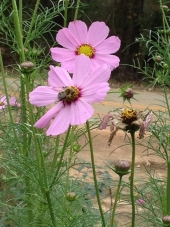 Karen Donnachaidh wrote:I 💚 this thread! You guys rock! I pop in over here often for a big dose of happy. Thanks y'all.

Thanks so much Karen! Hey, if you ever make it out to Georgia let us know! We'd love to have like-minded company.

women peeing outdoors
I decided that my tangents weren't suitable for this thread anymore since they also include males...and poop. Click HERE to see the new topic I created for it though.
show more
3 years ago
homestead
Outdoor Pee and Poo Contraption
So I've been thinking about how I'm going to design it, but I keep changing it. Originally, I wanted it to be "super" natural lol similar to the one on the Women Peeing Outdoors thread. (Click here to go there.) Now I'm thinking about how some people that come over tend to care more about privacy and comfort. Everyone knows they can just pee anywhere when they come over, but I'm thinking about having 2 designated spots where one is a urine collection and anyone who wants to contribute to it can and then it gets sent to specific areas of the yard and the other one is more tailored to people who are iffy about going outside.

Let's call the first one a Urinal. I'd like to have a container of sorts posted up or tied up onto a tree so that guys can easily make their deposits and go about their business. For the same Urinal, I'd like to have a shee-wee or funnel attached by a string so that the females can use it too. I plan to have a little disinfection station/box for the she-wee so that the device can be sprayed and left to hang and dry for the next use. I also want to have a water squirter so that everything can be rinsed to prevent odors from building up. I also understand that some people are shorter than others and the ladies don't want their urine coming back at them. I plan to have a couple of bricks or something to let the shorter people stand on and I plan to hang the urinal lower than it normally would. There will be a hose of sorts which directs the urine either to specific acid-loving plants around the yard or to a bucket which will then be diluted accordingly and spread around the yard. I still haven't figured out what to do about something for the ladies to wipe with though.

Here's a picture of the tree urinal idea---> Click Here

The second one can be called a Shelter for now. This one is for privacy and comfort; comfort sounds way too luxurious though (haha). I'm still working a lot out with this one, but this is what I'm thinking so far...Walls of odds and end material from around the house like bamboo, wood, metal, road signs, windows, doors, cob, etc. I want windows  for the roof and/or the top parts of the walls. This will allow sunlight in and odors out. For darkness, I'd like to have a solar powered fan to draw odors out and a solar light. I also want to include glow-in-the-dark stars or something like that because I just looooove glow-in-the-dark stuff so much!!! Just like the Urinal, I plan to have a similar disinfection station, water bottle rinse, and she-wee contraption. The rag/toilet paper is still an issue here too, but I do plan to keep mullein when I can. I want a urine diverter for obvious reasons, but I'd like to figure out a better way than the normal ones because they don't really work very well for me and I figure I can't be the only one in that boat. Also for the odors, I'd like to find a constant source of natural carbon material so that instead of flushing with water, carbon is dumped into the potty to help absorb and break down the deposits. Of course there is mulch and wood shavings, but those are not always readily available...any suggestions here? For the actual potty "sit"uation, I could do a drum as the catchment and a familiar toilet seat. This way I only have to deal with poop a few times per year. I could also do a more hands on approach and have a smaller catchment system so that it doesn't have to sit for so long. I imagine a really big flour sifter. My idea behind this is to add all sorts of compost to this potty and have blades to turn it and a screen to sift the smaller particles to the next layer. This layer can be called sludge. I want the sludge layer to somehow be manipulated so that it can be used directly on plants through hoses. Sounds gross, I know! Moving to the outside, I'd like to have acidic-loving plants to direct the urine to and alkaline-loving plants to direct the sludge to. I plan to have fragrant plants for odor control and additional bushed, shrubs, and vines for additional privacy.

I've also thought about incorporating worms too, I'm just not quite sure how yet.

We went to a PDC at Paul's a little while back and his was the first I had ever experienced so of course most of my ideas developed from that adventure. Click HERE to see what I'm talking about!

Brandon and Nikki's Homestead
These are small beds around the duck pen.
show more
3 years ago
homestead

Nikki's Home Medicine Progress-ish
I let him keep it on for about an hour...he said it burned. I told him there must be a lot of bad stuff it had to pull out, lol!
show more
3 years ago
medicinal herbs

women peeing outdoors
Oh, I'm just so excited to make my own outdoor composting potty area this summer!!! Just thought I'd share that and hopefully, I'll be able to follow through with it and update you guys too! EEEEK! Yay for FREEDOM!
show more
3 years ago
homestead