no make-up / natural beauty
When I was growing up, I was raised Mormon, and was told my purpose in life was to serve men and be beautiful for them. Very difficult for a kid raised on a bad diet with chronic acne by age 12. I left the Mormon Church as a young teen, but that brainwashing stuck with me. After I married, I did not allow myself to be seen without makeup on, making sure it was applied before my mate awoke, just as my mother had.
Later in life with the use of aloe Vera and neem oil I irradiated my acne scars, and rarely wore foundation. After getting on the raw Paleo diet, I literally became ageless, people thought my daughter and I were the same age! All I wear now is homemade lipstick.
As far as hair dye goes, that was a different story. I started to grey at 15,.and by 35 was mostly grey. After getting cancer, I quit using all toxic chemicals, and opted for natural alternatives. At first I used the boxed stuff at the health food store, until the price soared to $20 a box, and I then tried other alternatives, such as henna. My hair is pretty difficult to work with though, and I recently gave up on it completely. It was a big step for me.
I think having fun with things like natural lipstick and eye makeup, etc. to enhance and play with our natural beauty can be a good thing, as long as we don't depend upon it for our self esteem. Tribal people have used such enhancements for thousands of years, and in a way we seek to mimic our animal cousins in nature, exploring our own wild side.
As soon as we stop wearing foundation, our skin can breathe, and it's vitality returns. At first though a person looks worse, and it takes awhile to heal our skin of all those toxins and oxygen deprivation. It is seriously worth it though, and who wants a mate that is going to judge you for who you are skin deep? My mom used to say beauty may be skin deep, but ugly is all the way to the bone. Lol. It is kind of funny, but true as far as the last part goes. If you are a happy and content person inside, it is going to show, but if you are spiteful and angry, no amount of makeup is going to fix that... people are going to see you for what you are.
I think beauty is found in good health, being loved, and loving yourself...not in a bottle that attempts to cover up what we have been through.
show more
4 years ago
personal care
Mycelial Greywater Filter
Actually my internet provider is also saying you don't exist, I cannot access your page at all!

Sorry to post again regarding this matter, but I am seriously disappointed!
show more
4 years ago
grey water
Mycelial Greywater Filter
Thank you for posting this! I thought you might like to know Comodo security claims your site greenhornmining.com doesn't exist. You might want to contact them, because they are blocking access to your site.
show more
4 years ago
grey water 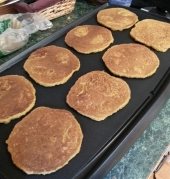 Super duper homestead pancakes (with squash!)
I just researched yesterday what to do with pumpkins, here are some links to some wonderful ideas. From fermented to pumpkin powder, to roll ups and more! I tried to post this by pasting on my android, but the form won't allow it...had to do it on my computer.

http://countrytart.blogspot.com/2011/09/dried-pumpkin-chips.html
show more
4 years ago
cooking
An Awesome Permaculture Podcast To Check Out...
I love a really good podcast, and recently came across this amazing guy you won't find anything about, other than on this podcast. His name is Ethan Hughes, and he is the only person in America running a permaculture center of it's kind.
These people are using no electricity or gasoline...that's right...no cars! It isn't just the obvious permaculture design discussed here, but the real heart of permaculture, how we connect with each other and society as a whole. This is a beautiful piece, the best of 4 hours of material. The complete 4 hours is available for those who are interested. http://www.thepermaculturepodcast.com/2015/episode-1523-ethan-hughes/
Please let me know what you all think, I guarantee you won't walk away unchanged.
show more
5 years ago
permaculture

toilet paper alternative- wash with water
Telephone books and newspaper have been used by poor people in emergencies for a long time, and work great, as long as you put them in the waste basket, and not down the toilet. Once again, like the plant matter, it will cause your toilet to back up.
show more
5 years ago
frugality

toilet paper alternative- wash with water
I just want to throw something in there regarding using plant material as T.P.. I have done so myself when living in the woods, in an outdoor context. However, most people are still using regular indoor plumbing, and under these conditions one cannot use plant matter. I mean you can if you want, but you are going to end up with some serious back ups!
Plant material is certainly a good choice though if using an outhouse or such. I know in many places outhouses are now illegal. Back in the early 80's my family lived out in the woods in Northern California, and our neighbors had an outhouse. Unfortunately it was during that time period that building codes changed, and they were forced to get indoor plumbing.
show more
5 years ago
frugality

toilet paper alternative- wash with water
It keeps the cloth from molding, and somewhat minimizes odors. It doesn't eliminate odors, but the bathroom never smells bad with the lid kept in place. The biggest thing is just training one's self into remembering at first to throw the cloth in the bucket, and the T.P. in the toilet. You seriously don't want to flush any of the cloth down inadvertently, or end up digging toilet paper out of the bucket, lol.
show more
5 years ago
frugality

toilet paper alternative- wash with water
Just lost my comment! Short version: I cut a large flannel flat sheet in a decent color in 2 1/2" strips, and then down to squares...makes several hundred sheets. I store these in a basket on the back of the toilet. I use a 3 gallon bucket filled halfway with water and a TBSP of borax. Leave lid on lightly. I only use for urinating, and not for poops or during menses, which stain the cloth. Once a week when I do laundry, I just drain the liquid and throw in with the other laundry.
For two people, we go through less than a roll of regular T.P. a month, which is pretty good! Not a perfect solution, but it greatly helps! After over a year, I am still using the same batch of cloth, so it is very long lasting.
show more
5 years ago
frugality