Keeping a Billy Goat Around
[]1 - If I get a male and keep him, how far apart do I need to keep him?
If they are in adjacent paddocks with a fence between, will that be enough, or will it still cause all the hormones? Is it a line of sight thing? A scent thing? or something that only comes from physical or sexual contact?
You can put an apron on them when goats our in heat.If your herding them.Then put them back in a seperate corral.Goats our just horny there is no to ways about it.They can smell the hormones/when their ovulating.Just make sure your paddock/corral your keeping him in is strong enough.He'll probly teach you a thing or to.Goats can be master escape artists.

2 - Is there any way to keep a billy goat "tame?" Or is that just a lost cause? They our generally pretty tame.If you get one that is trying to charge you all the time then switch out billy's or butcher him. Try it get the billy goat.
show more
3 weeks ago
goats and sheep
Small Paddock for livestock ready to be harvested
If you have the capital go with what laurel said.The cattle panels work great.Some t-posts or logs for posts.If your in a pinch use pallets.You can also construct one out of logs.chicken wire.alittle chicken tractor with some round lumber and chicken wire can work well.Be around and on the look out for predators.best of luck.
show more
4 weeks ago
butchery
The lost Book of Aquarius Released

Jason Alfano wrote:The only "the alchemist" was but a novel about a boy,, is this what your referring to?

The bible is also but a novel but people follow it?Yes that's the one I am referring.Paulo Coelho.
show more
4 weeks ago
art 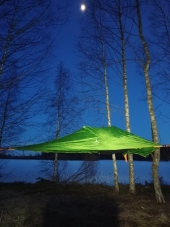 Temporary living strategies while building
I think your strategy is good.I have started from scratch several times.Usually like your saying you start in a tent.You set up your outhouse/compost toilet.Then set up a kitchen area.In my experience it's good to have a shade.So I make a pole building to cook under.Winter comes faster then you think even though it's already summer.Build something you can use a woodstove in for the winter while you work slowly on your house house.So your cordwood shed might be good depending on how fast you can build.For showers in the winter you can stand in a tote and just wash with a rag.They also make propane instant hot water heaters.for water you our most likely going to have to haul water at first.Maybe you can set up a raincatchment on your outbuilding/shed.Then eventually get a well drilled.Be realistic you will need things from the outside world.hardly anyone lives from the land from scratch anymore and if they do it takes time to set up systems.Your list if you wanted it to could include tools you need/tools you have/tools you can borrow.Sounds like you have some experience off grid so I think you got it covered.Where is your land located and how far our you from a water source?Maybe you can tap into one secretly?Just adding my two cents.You got this.
show more
1 month ago
homestead
The lost Book of Aquarius Released
You should read the book called The Alchemist.It touches on this this particular subject that you our interested in.
show more
1 month ago
art 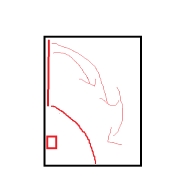 I have sheep dying for no obvious reason. I'd like to hear thoughts on what's wrong. I may rant.
I'm interested to see your results.Out here in southwest we use a mineral salt block it's the reddish iodine salt.What kind of hay our you feeding them?Sometimes we have sheep that will bloat.especially with alfalfa.Good luck on your research i'm sure you'll figure it out.It's a hard lesson to learn but you'll be able to help someone else.
show more
2 months ago
goats and sheep
The Importance of Purpose.
I just wanted to share this with individuals who may or may not be lost.Not sure if it fits here or in Meaningless drive but I think it's relateable.I believe personally that in order to find a significant other you most first love yourself and have purpose.So the first step in creating a relationship is working on yourself.Go to school(doesn't have to be a conventional school)(could be wheaton labs or many other farms.)You could even get a paid apprenticeship.Learn the skills necessary to stand on your own two feet.Spiritually and physically.As much as i don't wanna say it finacially as well.(This part isn't hard if you possess enough skill sets.)Starting a new relationship or starting a new journey is like starting from scratch.From seed to tree all over again.I have sat where you sit.I know how it feels and may be hard but this in my opinion is a step in the right direction.Personal success is an aura that radiates off you.I just felt the need to share this for some reason.
show more
3 months ago
permaculture singles
Yurts All things yurts
I've found the missing puzzle piece in detail.Straight from Mongolia channel.Smokering in detail.I hope this information helps someone someday.I'll post pictures when I get the build down pat.As my friend Olga above says.Keep chasing your dreams.Keep gettin up and tying your shoes permies.

Mike Feddersen wrote:I guess for me it was never about staying away from manmade materials, the off-gassing of vinyl has me concerned though, but I tarped a lot of loads so I think that would be negated.
.
I have dreamed of creating a yurt, ger, round house, call it what you want.
For the sides, I have wanted to find a manufacturer of cow bale feeders to make an extra large one. But I also like how steel scaffolding goes together and have dreamed of putting a curve to this type of a design. But I like portability, so I was thinking curved pvc pipe.
Lots of ideas, but time and motivation.


This guy has a electric conduit version that's pretty cool.Similar  to scaffolding. 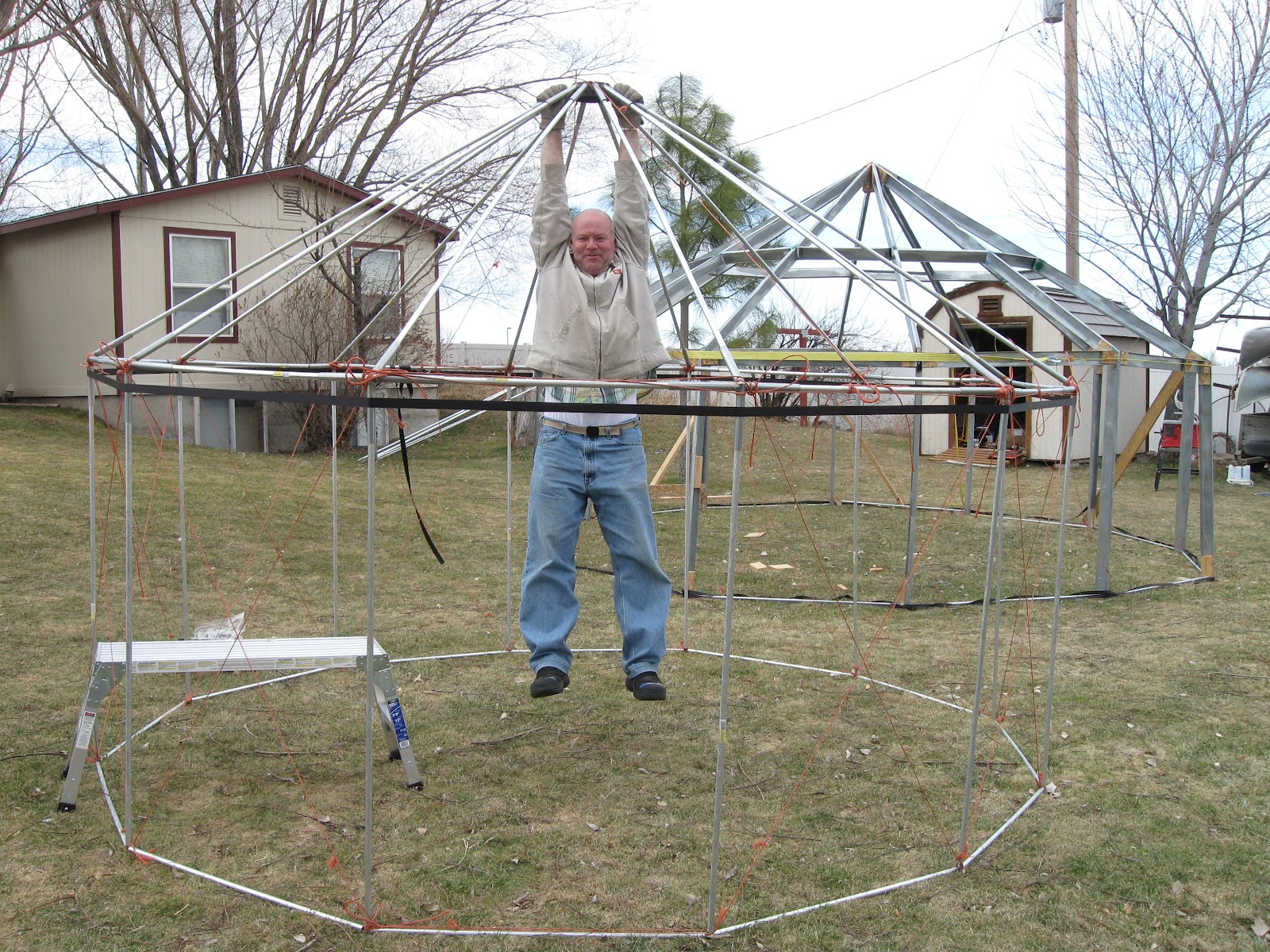 Glad to hear that you are in Arizona and that all this damp, wet stuff won't be an issue for you.

I don't think having the yurt in a barn would be so nice.  Personally, I think they are so beautiful that they have to stand alone (or with a couple of sisters!).  Mine was near a stream, in a little spot protected from the winds and I never got tired of seeing it nestled in its little corner of green - dare I say it - heaven.  Some years the rain was worse than others,

Building your yurt is fabulous, you will have such a tremendous sense of achievement.  One of our friends built his own and we all got together to help put it up.  They had 3 kids  and they lived happily until the children became teenagers.  The need for private space became quite an issue.  Even in a small flat, there is always a time when you can close a bedroom or bathroom door for a while.  He got around the problem by making an opening in the lattice work and built an adjoining smaller room with benders.
http://ystradfflyr.org/bender-tent/

It's a good thing for you that the by-laws of Arizona are what they are.  In France, yurt dwelling in certain areas has become very popular and of course the government is trying hard to refuse their permanent or semi permanent installation.  Being considered temporary accommodations, they had to be moved every so often, so most of us moved them by about a metre and waited for the next 3 months to see what happened.  In some villages, they got fed up and gave up hassling.  I don't know if they changed the laws to stop this loophole.

I had a solar panel, connected to an old truck battery and that was sufficient for lights and charging phone and tablet.

I forgot to mention that snakes also quite often found shelter in the yurt.  In France, not a big problem, we have only 2 main snakes: a short but very fast viper (venomous) and a long, slow, lazy couleuvre (non venomous grass snake), only impressive by its size sometimes.

The mosquito netting is not just for mosquitoes, but also for flies, wasps, hornets, horse flies and any type of flying critters that can make life a nuisance.

So, here goes, keep us posted with the building, I'd love to see the finished product. 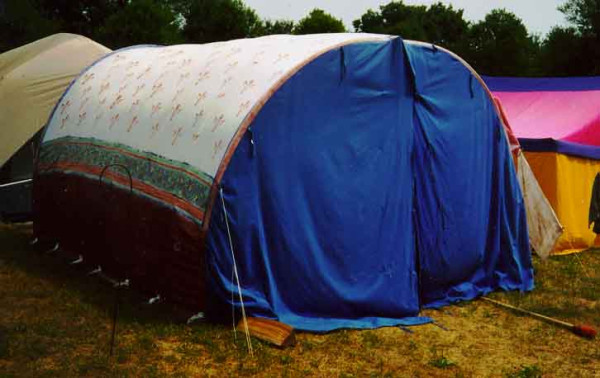 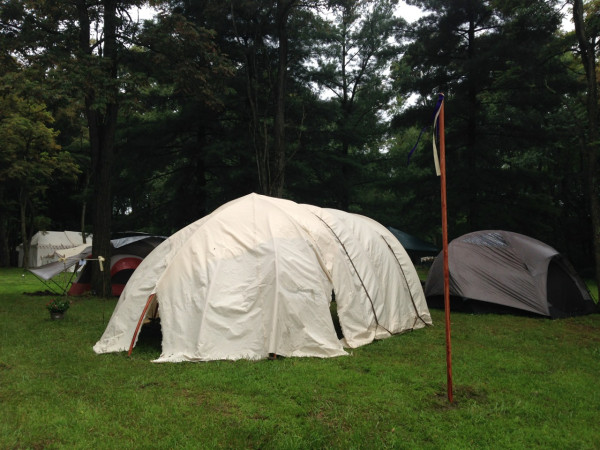 Those Bender Tents our awesome Olga I've only ever seen it another time on Ben Law's videos.If you don't know about Ben law (The wooden way) you should check him out he's awesome.Need a whole benders thread.All these people helping me i'm getting closer and closer to my goal.I'll keep workin at it.

The yurt set up on a friend's property has the reciprocal roof. I would say the reciprocal roof is not as convenient for a structure that is going to be moved. It was moved once and they weren't as careful as they needed to be about labeling parts and taking pictures, and it took two tries to get it up. That said, frequent practice would help.

Nice roof.Reminds me of some SunRay Kelley roofs.This guy makes a moveable yurt with reciprocating.I've never seen this design till now.