Ventilation System?
An insulated chimney will produce an especially strong draft. It might be possible to have a valve that switches the firebox over between a heating system that pushes air through a large thermal mass, and a vent system that has a clear, straight chimney but draws on a complicated vent system. The tricky part would be minimizing the flow of heat into the room in "summer mode" whilst maximizing it in "winter mode."

One of the videos with Ernie Wisner shows a system with a valve to bypass the thermal mass, to get a good updraft as things get started. If you added onto that an airtight, insulated cowl, that forces the air intake to draw from registers leading to the warmest parts of the building, I think that could work.
show more
10 years ago
natural building

mekennedy1313 wrote:
Are there any temperature vs efficiency charts for PV's and are there PV's designed to be efficient at higher temperatures.  The idea is to maximize energy capture by circulating a cooling fluid, water for example, that keeps the cells at or about optimum temperature but collects that otherwise wasted heat for CHP purposes.  Even if somewhat more expensive the fewer cells needed reduce costs and you have the added benefit of heating your home in cold climates.

PV's get less efficient with increasing temperature, due to fundamental physics. I think there are some photocatalytic systems (solar to chemical: hydrogen and carbon monoxide generation seem to be the two main tracks of research) that remain efficient at fairly high temperatures.

Moderately-high temperatures can also degrade the cells gradually, causing permanent changes that degrade efficiency but don't destroy the cells in one fell swoop.

A cooling fluid is a great idea. I think some PV arrays produce significant voltages, in which case a non-conductive fluid would be in order, in case a leak should develop. This might be a pre-warmer for a solar thermal collector, so that the temperature of water leaving the system of panels can be a higher temperature than you'd prefer for the PV arrays.

In hot climates, it's common to design PV collectors with a gap above the roof, and a slant, such that the thermal draft raws (relatively) cool air over the roof from dawn to well after dusk. This helps keep the cells cool, but has an added benefit in making the building below easier to keep cool.


mtnDon Miller wrote: A concentrator also would need tracking through the day to make it most effective. Even then with the way PV module prices have fallen a tracker is often more expensive than adding PV modules to the system.

It's even worse than that: a typical concentrator makes a tracker absolutely necessary. The better the concentrator works, the greater the need for precision alignment. A slight misalignment will mean part of the cell goes completely dark, which can mean a disproportionate drop in efficiency.
show more
11 years ago
solar 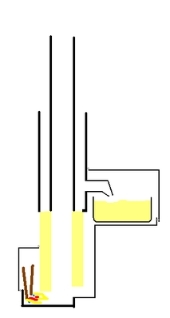 Rocket Wood Kiln
In the rocket evaporator thread, I posted the following diagram, to illustrate a basic principle I think could apply here:

A part of the chimney not too far from the exhaust can be used to heat incoming air; moist air can be used in combustion; and an insulated section of chimney can drive air through the system very rapidly. The important thing is to make sure that the easiest path for air to get into the fire is through the whole kiln; this means the system should have a ridiculously-overpowered updraft.

As with the maple syrup idea, using air as a heat-exchange medium can make fire a lot less likely: the coils of a hairdryer are red hot, but few people light their hair on fire.

Naturally, the tub of maple sap in the diagram should be replaced by a stack of drying lumber.

If there's significant thermal mass in that insulated section (e.g., if the updraft tube is built of brick), a short fire in the morning can drive airflow for a long time, allowing forced air without as much heating. A sheet metal cowl that covers the pipe and interferes with heat transfer to the air intake would enhance this effect.
show more
11 years ago
wood burning stoves 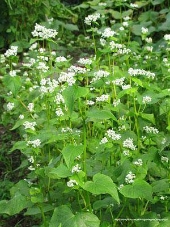 Jonathan Byron wrote:
Bee's do love it, it provides one of the highest honey yields per acre. I've read that BW flowers are only open in the morning, and that bees who work it become cross in the afternoon.

Maybe some borage would help. You might have to give it a head start vs. the buckwheat.
show more
11 years ago
plants
Making food forest and wildlife habitat on unbuildable part of suburban lot -- what to do first?
There are lots of good suggestions here already, but I'd like to add two:

Identify as many as possible of the species on/near your property, and read about both that individual species, and relatives that might be introduced into the same niche. A lot of trouble comes from thinking of "weeds" or "pests" in general, rather than encountering specific plants and animals. At the very least, species will be indicators of ecosystem conditions, but quite a few will also be useful in their own right.

EricTheRed wrote:You can speed up the process by ground layering whatever you decide to plant as your fence.

There's some room for layering in the process of traditional hedge laying, as well.

http://en.wikipedia.org/wiki/Hedge_laying
show more
11 years ago
fencing
Sepp's Plant Families
I've read he uses perennial rye on some parts of the property, but not what he groups with it. Some of the videos show produce being harvested or sold: from those, it looks like root vegetables and winter squash are important parts of his plant families, but that may only be due to the season it was filmed.
show more
11 years ago
plants
Exactly Why We are Organic .. Sterile in the Navy
Children's clothes were intended to "charge up" on visible or UV light: they don't contain radionuclides.

Luminous watch dials, airplane instruments, and gun sights have vaguely the same sort of fluorescent/phosphorescent material, but get their energy from radionuclides instead of the sun or the previous few minutes of room lighting. The radionuclides are separate from the materials that glow visibly.

Some armor-piercing ammunition contains radionuclides, but doesn't glow in the dark because it doesn't contain any fluorescent or phosphorescent material. Plutonium is more precious than gold, and isn't part of any conventional weapon's design. The nuclear industry does produce a lot of depleted uranium, analogous to a cheesemaker producing whey (except the isotope you need for nuclear technology is 0.7%, compared to 3% or so milkfat). There is definitely money in finding a use for depleted uranium.
show more
11 years ago
organic
Is Perlite Dangerous to Earthworms?
I bet spores from the air are responsible for the mushrooms. Putting spores into the air is what mushrooms are for, after all.

Congrats on maintaining conditions for those spores to grow well, though!
show more
11 years ago
bugs
community food: I provided 540 meals and received 2
A lot of this is more fundamental, even, than human nature. If a niche exists for gamers-of-systems, that niche will occasionally be occupied, and either there will be some mechanism to leave that niche, or gaming will bring the system down.

Pioneering work on this was done by Robert Axelrod, and published in Harnessing Complexity. His simple computer simulation involved computerized agents playing a "prisoner's dilemma" game many times in a row. In each session of the game, each of two players decides whether to work with or against the other: those that exploit do the best, those that cooperate do okay, and those that no one cooperates with do the worst. In the beginning, each agent was programmed with a randomly-chosen set of behavior rules, and was assigned a random number as its "identity," which other agents could respond to when choosing whether to work with or against it. After many games were played, the worst-performing agents were re-programmed with behaviors & identities resembling the best performers but with some new randomness mixed in. "Tribes" emerged which would tend to cooperate with similar-numbered agents, and defend against differently-numbered agents. As these tribes got larger, though, they began to be able to support similar-numbered agents who never work with any other agents; exploitative agents were initially very successful, rapidly increasing in number until the tribe around them collapsed.

Axelrod's iterated prisoner's dilemma simulation was too simple to allow the emergence of mechanisms that defend against exploitation, but I think it's worthwhile to identify real-world mechanisms which have served or might hypothetically serve that function.
show more
11 years ago
intentional community