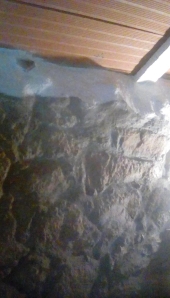 Sorry if this is the wrong forum. Wasn't sure where to put it.

I live in an old stone barn, 2ft thick walls, single storey with a 2-layer terracotta tile roof. Built directly on the bedrock. The sun beats down on the roof all day, so by 4pm I'm suffocating. I spray myself with water and have a standing fan, which is nice, but by 4pm the humidity from all the water I'm spraying, plus me and the dog panting all day adds to the swampiness. The sun doesn't go down until 9pm so there's at least 5 hours of sweltering I have to go through before I can escape outside.
I leave the window and door open all night but it doesn't cool down much. Morning temp outside is 15C, inside it's 25C.

Option 1 is 5cm cork insulation sheets on the ceiling. It's expensive (1200 EU total) but I'm told it's worth it. It will take me until next summer to save up enough.
Option 2 is to knock in another window for ventilation at night. Cheaper by half, but this won't really help me at 4pm though.
Option 3 is to cover the walls outside with clay. But that still leaves the roof to get baked.

Anyone have an opinion on which option will have the most affect?  I'll probably end up doing all 3 eventually, but that will take a couple years so I'd like to know which one would be better to do first.

I can't start any of these projects until the winter, so in the meantime, if any of you clever folks have any tricks for how to keep the house cooler during the day I'd really appreciate it.

show more
4 months ago
natural building
Which "weed" do you like the most?

Cannabis sativa.
We call it 'weed' where I grew up.
Definitely one of my favourites

I had a Maine Coon Cat who used to fish for crayfish by sticking her arm as far as she could down the hole. When one latcked on to her, she would pull it out and eat it. In her case, she was clearly after food.

I wondered if he needed the extra protein, but he ate geckos and mice by the dozen so probably not.
Maine Coons are pretty cool cats.
show more
4 months ago
meaningless drivel

Anna McIntyre wrote:
My previous cat used to deliberately put his paws in an ants nest, wait until the ants had covered his legs, and then lick them off. He would do that repeatedly for several minutes until he was satisfied.
These are the kind of ants that sting when disturbed.
I used to see him do it most days.
Anyone seen a cat do this, or knows why he did it?


Makes me wonder if those ants gather nectar. Some cats really like sweet things.

These are the same ants who farm aphids, so you might be right

That was a great story.

My previous cat used to deliberately put his paws in an ants nest, wait until the ants had covered his legs, and then lick them off. He would do that repeatedly for several minutes until he was satisfied.
These are the kind of ants that sting when disturbed.
I used to see him do it most days.
Anyone seen a cat do this, or knows why he did it?
show more
4 months ago
meaningless drivel
Women homesteading ALONE?

Loads of interesting points on here.
But I didn't see anyone ask the question- What's the point of doing it alone?

What I mean is this- I've been homesteading alone for 2 years, and I'm recently asking myself this question. I'm feeling the lack of having someone to share this with.
Y'know, sharing the day to day little things, like 'oh wow look at the size of that eagle' or 'what's this weird bug on my arm?'.
Like sharing the triumph of a job well done. Or the ease of sitting in the sunset together with a Mojito without having to invite someone and arrange it all first.

I'm losing my motivation a little bit because of the lack of partnership. The massive amount of effort required is beginning to outweigh the benefits for me.
Why am I trying to make a beautiful garden if I'm sat in it myself most of the time?

I'm mostly introverted, but I'm not a hermit. I have friends around but they're mostly couples with kids and they don't have much free time. Trying to do anything with them has to be planned out military style.
I miss the easiness of someone just being there. I'm getting restless and dissatisfied, on my farm day after day, talking to my dog. She's great but not much of a philosopher. And more likely to eat the bug on my arm than gaze at it in wonder.

Worry less about thieves and accidents. Instead be sure you're at ease with yourself and with being isolated for long periods.

Creating rock and log piles to deal with garden pests

This is such a good idea. I'm definitely doing it.

The stone walls of my house aren't sealed yet, and I was hesitating to do it because the walls are full of snakes, scorpions and geckos and I don't want them to have to leave the area.
I'll make sure I have a pile like this nearby before I finish the pointing and rendering.
Thanks.
show more
5 months ago
permaculture 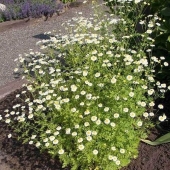 Feverfew Repels Bees and Other Insects?

Maybe if it's near well-established tall herbs it would be ok.
The feverfew here is growing wild so that might be a factor as well. Like the bees have gotten used to it over the years?
I get the impression the hordes of bees around here wouldn't let anything stand in the way of getting to all those tasty blue/purple flowers :)

Feverfew Repels Bees and Other Insects?

Feverfew grows all over the place here.
There's patches of it near my borage, sage, rosemary and lavendar but the bees are all over them in spring so it doesn't seem like they notice it much.
Maybe because the herbs are much taller so the bees don't actually have to get close to the feverfew?
show more
5 months ago
medicinal herbs 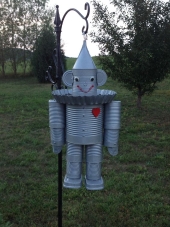 I'm saving my feedbags in the hope of building a wee earthship one day. I think I have enough for half a wall so far :)
My ridiculous amount of glass jars will likely get used the same way.
I love Anne Miller's painted cans. Stops the rust and looks so pretty. Definitely trying that.