Chicken with head injury from pecking - suggestions?
We had this happen with three of our chickens (over aggressive rooster who is long gone). The first one we put down, thinking she'd never recover, the next two we just separated used vetericyn poultry spray for a few das and they've healed up! They're still not the prettiest, but they seem perfectly fine! Chickens are amazing.
show more
2 years ago
chickens
Chicken Egg Tracking Spreadsheet
I LOVE it! It inspired me to maks a much simplified spreadsheet for myself!

I guess, since you're asking for feedback, that would be what I'd say, is I would find it more useful if it was a little simpler. Trying to keep track of the egg size and color isn't that useful to me and the extra steps in recording would make me less likely to use the spreadsheet, but if it's just the total number of eggs, it's much less of a hurdle to recording daily.
Having said that I'm whatever the opposite of type A is (type Z?) and I can definitely think of people I know who would LOVE the level of detail.

Also ps I read your blog and realized we are almost neighbors! We're up in Barnardsville. Love these mountains.

Thank you so much for taking the time to make this, and sharing it! It's really going to help me keep track of everything!
show more
2 years ago
chickens

Death of Livestock/Pets--How do you cope? How do you help your children cope?
I feel you on this. My little girl is three and in addition to losing her great-uncle and my parents little dog dying (we live on the same property as them and she spends a lot of time at their house) we also lost 25 chickens and 2 ducks in about a month to a fox (most of the chickens were killed while we were away and a relative was watching them.) She's definitely learned more about death than I hoped she would have at this age. Like you, our birds were killed right in front of our house, and in the middle of the day

My dad and cousin who was watching our animals, have spent a TON of time and energy trying to shoot, trap, snare etc the fox. After returning from our vacation I invested in some electric poultry netting and haven't lost any more birds. If a predator has gotten a meal somewhere, it will always keep returning. In the two months I've had our birds behind electric fence I've seen the fox close to them several times  (it always manages to slip off before I grab the gun! Just because I don't want to spend a lot of time and energy hunting it doesn't mean I wouldn't kill it if I had the chance.) The bobcat won't ever stop coming round. It will come and check, and if there's not an easy meal it will keep going and if it has an opportunity it will take another bird. Your best bet is to protect them with a strong psychological deterrent (a HOT fence).

Anyway, we deal with this with our daughter in a few ways. Firstly, we do not name our farm animals or make pets of them. Our sow who had piglets we call mama pig, and that's as close to a name as any of them have. We also talk to her (nature shows like planet earth help with this!) about how predators have to eat other animals. They don't have any choice and if they didn't kill animals they would die. Having said all that, she did have one buff orpington she named Pingus. When she says she's sad about the fox eating our chickens (which she does mention) I agree it's sad, but there have been a few times when she's said "mama, did the fox eat Pingus?" And I've said "I don't know sweetheart, maybe Pingus went to live in the woods.". Not my proudest moment, but I totally understand what you're saying about it being a lot to process for little ones (bear in mind, we left for a vacation with ~25 chickens, and came back to 6).

BUT kids are resilient! She talks about how she's sad Maddie (my dad's dog) or Uncle Mike died, and I try to always listen to her feelings and agree with her that it's sad, and make sure she knows if she ever wants to talk about it or ask any questions I am here, and she is processing and coming to terms with it in her own time. And really, I think one of the wonderful things about living on a farm is that our children get to see this real stuff of life. Chicks hatching, piglets getting born, and likewise pigs getting sent to the processor to be turned into meat, and death from predators and illness. I wouldnt want to raise her any other way and I don't think your are traumatizing your son. It just takes them a while to process death, the same as it does for all of us.

show more
3 years ago
predators
Thorny Hedges for Predator Deterrence
We lost 25 chickens and two ducks to foxes before buying an electric netting fence (we already had a charger). I wish we'd sprung for it sooner, as it would have been a lot cheaper than all the chickens we lost.
Foxes are tricky but electricity is an extremely effective psychological deterrent.

Also rolls of welded or chicken wire aren't that much cheaper once you include the cost of the posts, and are much less reusable. Basically I wish we'd gone for the electric netting sooner amd will always be protecting our poultry with it in the future.
show more
3 years ago
chickens 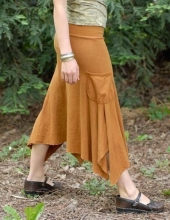 The search for a practical skirt
I have LOVED reading through this thread! I have been really into skirts for farm work. It's too hot here for pants in the summer, and a calf length skirt plus rubber boots does the trick for me in terms of briar/tick avoidance.

I've had good luck just going to thrift stores regularly, and heading straight to the skirt section. Anything that's calf length, pretty full skirt, and fits around the waist (yay for drawstrings!) is great. Denim is super durable. Also I'm pregnant right now so just pulling them higher and higher, and I'll wear them next year too. Reading this thread though has made me think I need to get into aprons, as not all of my skirts have pockets on them and I can't seem to do chores without getting fermented pig feed splattered all over them.
show more
3 years ago
frugality
What to plant after pigs have been in the woods?
Thanks you guys! There's actually two volunteer watermelon plants coming up from their poop right now!  I was just worried because it's so wooded if things would do well enough in the shadyness, but I love the "throw a bunch of stuff at it and see what works" approach. Basically my approach to most things.
show more
3 years ago
pigs
What to plant after pigs have been in the woods?
Hello, we have our pigs in some woods which we have partally cleared (cut out lots of junky trees to help the good trees do well). We're sending some to slaughter and fencing some other ones in a smaller area (naughty piglets need some containing and hot wire training). The main area where they hang out is kind of a mess (some erosion, a gross stinky boggy area near the feed trough) and I'd love to seed it and let it rest. What would be a good choice? I think it's still too woodsy for grass, but it would be good to see some growth there and give the pigs something to eat the next time they're rotated in. I am a rubbish gardener but willing to give anything a go! We are in western North Carolina, so it's pretty hilly.
Thank you!
show more
3 years ago
pigs

How to not spend money feeding my chickens

Taylor Cleveland wrote:
As far as the amaranth and corn. On what scale are to doing that and how do you plan to store and process that. Interested if that's something that can be done simply on a small scale. Thanks!

We are not doing it on a huge scale, our garden area is probably half an acre and only some of that will be used for those crops. Some of the dent corn that we're growing will also be ground by us for cornmeal. For storage we will probably dry it on the husk them store in plastic bins, mixing in some diatomaceous earth to help with insect prevention. Our goal is not to completely feed our on chickens at this stage, just to make a dent. We also ferment our feed and are very lucky to get spent brewers grains that we mix in. To be honest our chickens really don't eat that much feed at all, probably helps that they free range all over. Free range eggs are $5 a dozen around here so I think they more than  pay for themselves.
The ducks on the other hand....
show more
3 years ago
chickens

Feeding the poor
This is such a wonderful Idea. One thought to consider is things that keep a bit longer, as that will help people use it up rather than having it go to waste, and will also give a little more leeway in timing for distribution after harvest. For example whole lettuces or kale  rather than baby greens, carrots, winter squash, perhaps talking to someone local with apple trees rather than planting lots of berries, sweet peppers are great and are something my little girl (almost 3) can't get enough of.

You could also consider including a few recipes, especially if you're providing something a but unusual, and instructions of how to preserve things (for example when tomatoes are in season how to prepare them to freeze or can to eat later). You might also have a local food bank you could liaise with if you have a sudden surplus of just one thing . I also wonder if having open gardening days is something people (and especially their kids!) might enjoy if you live in an urban area where people don't usually get a chance to connect with where their food comes from.
show more
3 years ago
permaculture

Buying Bottle Lambs
My husband and I have been wanting to add sheep to our little farm for a while, and one thing that keeps putting us off is how expensive sheep are. But it's lambing time, and there are ads on Craigslist for bottle lambs for cheap!

Is this a brilliant way to start our flock, or a stupid way? We are planning on rotationally grazing them with our two dairy cows (one of whom is pregnant due in September). If they're not raised around other sheep will they still know how to be sheep? Are they more likely to have health issues down the line? Is raising bottle lambs so much of a pain it's not worth the savings?
Any input would be much appreciated!
show more
3 years ago
goats, sheep and llamas