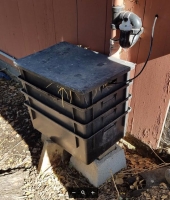 What's the lowest maintenance way to do vermicomposting
Maybe I am doing it wrong but I have a few worm bins and they really take almost no time. I feed them maybe every other week with some food scraps and that is about it. It literally takes me maybe 10 minutes every 2 weeks. I can't imagine how someone could not have the time for that. I guess it does take me a bit longer to harvest the castings but I only have to do that every couple months and I am thinking of some ways to make that much easier too.
show more
4 years ago
composting
Ph Meter
Has anyone used this meter in their garden soil. Seems to say it will measure both moisture and ph but I am looking for direct experience before I decide to order it.

show more
4 years ago
soil
Woodchips
Looking at getting woodchips for free and wondering if there are any types of wood other than juglones that I should be careful about? I plan to use chips on garden beds that will sit over the winter as well as around fruit trees. With the free chip deliveries I don't get much say in what we get so I may get some juglone in there and not sure how to deal with that. How do people deal with the possibility of getting juglone species in free chip deliveries? If I leave it sit for a period of time before spreading can I then use it? I have an option with one place to pick pine and poplar as acceptable and as near as I can tell people don't want it for burning due to creosote buildup but for the garden it seems to me it should be fine, am I right?
show more
4 years ago
mulch
Overseeding
I have 3.5 acres and about 1/3 of it is fenced pasture that I don't currently use myself. I did have a neighbor run some cows through this year for a couple weeks and it looks pretty good now based on my uneducated eye. I was thinking of overseeding this fall to add aditional diversity of plants and help improve the soil over time. I was thinking of a mix including white clover, vetch, daikon, and some kind of rye grass. I have little equipment but I do have a small ventrac tractor and a pull behind spreader. I was thinking of using a drag harrow with 4 1/2" teeth to prep for the spreading of the seed and then broadcasting the mix. I may be able to find someone to bring a tractor in and disk but it seems to me like this approach might work fine. Does anyone have any thoughts on this approach or on additional species I might consider for the mix?
show more
4 years ago
pasture

Love bee balm!! We moved late this spring and don't have any blooming at the new place yet, I miss it.
show more
4 years ago
paul wheaton's pseudo blog

Scott Martucci wrote:They seem to have been reasonable enough to wait until after the event then release a video explaining to their audience in their space that they do not endorse Wheaton Labs.

I understand the point you are trying to make, and they absolutely have the right to endorse, or not, anyone they see fit.  Were their actions actually reasonable?  Having not been there, I don't feel qualified to have an opinion on the specifics, but if the conditions were as horrific, unsanitary, and unsafe as they say, was it wise to stay, with their children no less?  Personally, if I went to a class, a camp, a getaway, of any kind, and I was feeling emotionally abused and in danger, I would hop my happy ass in my car and leave.  If it was a paid event, I would pursue getting my money back after leaving and getting my family to safety.  The fact that they say how horrid the conditions were, but stayed, makes me think they may be exaggerating the situation just a tad.

Agreed that I was not there and do not know what went down but as I said based a couple years worth of videos from these people they have never shown any inclination to say anything negative about anyone. Should they have left or shouldn't they have, I don't know but seems like me trying to make that decision for them based on what I would do is no different than trying to tell Paul he has to change the way he does things because I don't like it.

Still anxiously waiting for my videos!! Now to find the time to watch that much video, hmmmm.
show more
4 years ago
paul wheaton's pseudo blog

Scott Martucci wrote: the truth is probably somewhere in the middle.

Though in general I agree with that sentiment, in this case I don't.  Paul goes to a lot of trouble to repeat, over and over in different ways, that his goal is to do things his way at his place.  Not to meet people halfway between their way and his way.  He has said, over and over for literally years, if you don't like things done his way at his place, don't go there.  Period.  So if people don't like what he does at his place, it is 100% on them.  Unlike out in the rest of the world, he is not obligated to meet anyone half way.

I agree and I am not saying that he is obligated to meet anyone anywhere. I am just saying that his version of events is probably not any more true than theirs is and the truth is probably somewhere in the middle. They did not just come to his place randomly he opened up a class and invited people to come and they came. Should probably have been better agreement from both sides what the expectations of that arrangement were so lesson learned as Paul said. However, if you go into a place as a customer and want to let them know you don't think they are doing things in the way you think they should you are free to do so just as much as the owner is free to ignore you. They seem to have been reasonable enough to wait until after the event then release a video explaining to their audience in their space that they do not endorse Wheaton Labs. Even Paul agrees this is perfectly acceptable ("But it is totally fair to warn people away"). As I mentioned the thing that strikes me is not Paul's response, which seems reasonable, but some of the other peoples response here.
show more
4 years ago
paul wheaton's pseudo blog

paul wheaton is fucking awesome!
I am a kickstarter supporter looking forward to getting my downloads of the PDC and ATC. I have followed Fouch-o-matic for a long time and have enjoyed what they put out there. I have never seen anything from them publicly that is in any way negative about anyone and I feel like they went out of their way in the video to make clear they were just expressing their opinion based on limited observation because they did not feel comfortable leaving an impression that they were endorsing Wheaton Labs. Additionally they do not seem to be expanding upon anything or attacking Paul at all in the comments section for their video even in response to some of their followers that might be. That all seems pretty reasonable to me.

On the other side I have listened to far less of Paul's content but have consumed some. I feel like Paul also presented a reasonable description of his perception of what happen in the initial post here. Paul is more involved in the discussion with his followers but even there he seems to be, mostly, making reasoned statements about his observations.

My conclusion is the same as when my kids come to me explaining how they got in an argument, the truth is probably somewhere in the middle. That being said the fact that I have never once heard the Fouch's do anything remotely like this over a couple of years leads me to also conclude that something rather significant in the eyes of the Fouch's must have concerned them. Of course I was not there so I will never know.

The more telling thing to me is the followers responses. It seems that many people in the Fouch's comments clearly don't like Paul and I am not surprised by that. Paul has a love it or hate it type personality it seems to me and if they don't like him fine. The reason I don't consume as much of Paul's content has to do with his personality as well, just harder for me to watch/listen to him. More interesting to me though are the responses here. There seem to be a lot of haters here that are hating on them for no other reason than these people felt a need to clarify that they will not endorse Wheaton Labs. It seems that some have not even really watched their other videos. If this video makes you angry enough to say some of the things said here then fine but realize that kind of thing is probably more likely to turn people off to Paul rather than bringing more people in even though it is not him saying some of those things. Just my opinion.

I can't wait to get my downloads and start watching the courses!
show more
4 years ago
paul wheaton's pseudo blog
Passive Soil Building

Bryant RedHawk wrote:hau Scott, If you have any questions that you don't want to put into this or another thread, feel free to purple moosage them.

Excuse my ignorance but I have no idea what that means.
show more
5 years ago
soil
Passive Soil Building
Thanks for all the replies everyone. This gives me something to look into. I am in a bit of a different situation I think than Daron. I am really just trying to start observing so I can develop my long term plan for the property but in the meantime I figure I can have some work being done to build the soil while also reducing the amount of work (mowing) I need to do. I was originally thinking a grass and legume mix but will go a little broader in my thinking and probably include something like daikon at least.
show more
5 years ago
soil