[trade] Fig trees, Raleigh, NC US or by mail
Kevin, sorry for the late reply, life has happened.  The hazels were 12" bare root two years ago. they were potted then in 2 gallon pots. will see how they break dormancy soon and measure the height and caliper at that time.They have been in a shady area which has limited the growth, these are expected to reach 12-15' when planted out.
show more
1 year ago
flea market
Any counsel on dealing with the extreme variability of herbal effectiveness?
Hi all.    I am struggling with the grand experiment.    It seems that so much of herbal medicine is guess work, and a continuous experiment with limited continuity of success. It works often only because I believe it works.       Then I find something that seems to be effective, then the herbal source is only  10 %   as concentrated as the previous stuff, and therefore not effective.     A recent experience with Habanero peppers may best explain some of the variability of products.   Seed from one pepper, planted in two gardens in the same general location.   Garden A produced peppers with such heat as to burn your face off, tears in the eyes, burning lips and nostrils, with a small nibble.  Garden B   the peppers could be picked off the plant and eaten whole ,almost as mild as a bell pepper.   If the heat, or capsaicin is the "medicine"  I certainly want the Garden A peppers.  If I have tried the B peppers two or three times, I deem it a failure.  If I listen to the claims of sellers, of course they are all effective.  So, how long do I continue to test drive the claims of others?, and for how many different ailments, pain, inflammation, colds, runny nose, itchiness etc. etc.   Then , how do I measure the quality of product when none has been tested.   So I get four different herbal medicines rom a trusted friend.  but it was ineffective because I has no colds last year and the medicine was too old by the time I needed it.   And I'm not interested in this being my life's work, consuming all my time and resources to find out the correct formula.    The thing is, I really would like to have a few trusted effective remedies on the shelf.  ,  without the myriad excuses of why it didn't work.......OK   my whining is complete for now,  thanks for the ear    k
show more
1 year ago
medicinal herbs
[trade] Fig trees, Raleigh, NC US or by mail
Rick, I'm in Hickory,   Can trade rose of Sharon and Johns elderberry cuttings, elderberry rooted cuttings, elderberry in 1 gallon pots, Aloe, Hazelnut, Comfrey  #4  and #14.    may have one gogi berry
Id be interested in two starts of each fig....Thanks..  Ken
show more
1 year ago
flea market

What the heck is Humus?
Some of us read about it, some discuss it, some study it, some look at it, some debate it, some argue it, some meditate on it.
The real GOLD, well stated by Dr. Redhawk is
"In the mean time I think it is most important to build compost heaps, moving the heap location so that we can infuse the soil with all that organic liquid wonderfulness."

The value is NIKE     "JUST DO IT!!!"  , keep up with the above interactions, but most importantly make a pile today.      k
show more
1 year ago
soil
What are everybody's favorite or most necessary tools?
My Leatherman multi tool has been a life saver many times, and is great for every day carry. Used to rebuild business equipment in the field when my tool box was in the warehouse and not in the truck. This saved me an entire day off.  Used for minor adjustments and car repairs. Used in the office to repair a colleagues damaged phone charger cord when they were experiencing a family emergency. Used in the field for tractor adjustments, cutting bail wire, etc.   Replaced an electrical receptacle at the house.  There are others I cant quickly recall.         The other tool is a very heavy, very sturdy, very expensive, full strap diamond point tree spade.  It cuts roots and most importantly does not fold in half or break the handle when under extreme stress.     For land clearing, my combo hoe/rake (AM Leonard or Rogue type)  again, not a 15 dollar hoe.
show more
1 year ago
gear 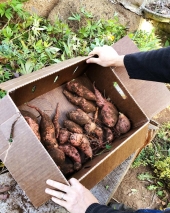 Sweet potato success
I was considering using sweet potatos as an edible ground cover around and under new grafted fruit trees.  I am in 7b in NCarolina.  As the trees mature they will naturally block the sun and decrease the yield, hopefully transitioning to a fruit yield. I am encouraged by your persistence shown in trying to locate the sweet spot for your potatoes to thrive.  Any thoughts on this strategy?
show more
1 year ago
permaculture

What the heck is Humus?
Oh what a mistake I've made.  It seemed, that with all the diverse opinions expressed, that for clarity it would be wise to review again the definition of humus. In doing so I may have discovered the problem. According to the first 12-15 definitions provided by Mr. Google, no two were the same. There are some from Webster, from linguists, some local, some international, others from scientific journals, others from myriad "experts" and groups. Some say brown, some black, some black and brown, some wet, some dry, some arobic, some anaerobic, some equal to compost, or partial compost, or finished compost, or finished aged compost, or absolutely NOT compost, or plant based only, or plant and animal based, or it does not exist at all, or it lasts for eternity. In some cases it exists only in the presence of live plant roots, others say its found deep in pits. So, although I may be 100 IQ points short of understanding, I'm back to Mysterious, Magical, Molecular Poo. And, I love how it makes my tomatoes and peppers taste.
show more
1 year ago
soil

What the heck is Humus?
Mysterious, Magical, Molecular, Poo

I am fascinated. Please continue.  Thank You for sharing your self and your knowledge Dr. Redhawk. You are very generous, indeed.   k
show more
1 year ago
soil
Easiest Fruit Tree to Grow
Steve, I am west of you near Hickory. Easiest for me was receiving nine sticks of Elderberry about 5/8" by a foot long from a friend, about 3 years ago. I forgot about them for about three weeks. I had about 15 minutes one evening and planted them with a hammer. I was hoping for at least one to survive. I pruned off the 2-3" I had damaged.  All nine survived, and thrived, I got some beries the very next summer. Thinned to 5 trees, now 12 FEET tall, and really need to be thinned down to two. This summer I missed close to half the harvest, but ended with 1+ gallon dehydrated berries. What could be easier than abuse and neglect leading to a nice harvest. Last fall I planted several more cuttings in hard clay. I used a 2" length of rebar to pound through the clay.  They all died to the ground, but this spring 6 sprouted up. they are now surrounded by a 6" pile of arborist (free) mulch, and worms are beginning to work the clay. No fruit on these survivors yet. The healthiest and most productive have been in full sun. Also heve a couple of dozen prunings in 1 gallon pots to add later to the two acres next door. Did have to fight the birds for the harvest. They rewarded me by eating their fill and then painting my car purple. There was no bill submitted for the paint job.
show more
1 year ago
fruit trees

What Types of Compost Teas Exist? Any Favorite Recipes?
Dr. Redhawk and Eric, With such a variety of inputs and methods available, would you both share some of the pitfalls, and mistakes etc. that you have experienced in tea making, if any? It would be helpful to have a list of inputs, techniques, or methods to avoid for some neophytes as myself to make the the first few attempts. Or, am I over complicating a simple process?
show more
1 year ago
composting