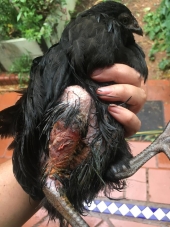 Growing skin back on a chicken
This will most likely be my last update on the skin healing. The last scab has fallen off, and I’m quite impressed with the progression of healing. I’m also still mostly surprised, because beyond the chicken’s will to live, I didn’t initially think that the leg was salvageable, but we did it! 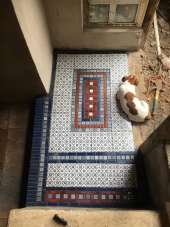 ' Build a house by hand" using only hand tools? - no, I probably mean by myself, using my own hands.

I'm quite fond of my nail gun, it has made me about 50% more efficient at getting stuff done, though we doing really have a culture of wood construction (savannah as opposed to forest), so more mud building, adobe, brick and mortar.

I forgot how long finishing takes. most of the structure is up, but I feel like I'm still months away from habitation.
show more
1 month ago
tiny house

Building a Home by Hand
I’ve always believed that it’s a rite of passage to build your own home.
As an architect (by training) it may have been somewhat engrained in my thought patterns.
I’ve redecorated and refinished a few times in the past, but now I’m finally building a home with my own two hands (with a little help from other hands.

I prefer to call it a home rather than a house.
Technically it is more like building between spaces.
There is a pre existing wooden structure with a deck on top... so I’m building a half dug out cave house underneath a floor.

The space used to house my rabbits and chickens in the past, so technically I’m moving into the chicken coup.

The build is mostly out of salvaged and reclaimed materials, some gifted pieces, very few things bought. Kind of like putting together a patchwork home. I’m also experimenting with some natural building techniques and finishes, and hoping to get into more natural/ non toxic builds in time to come.

Using this thread to log progress.
I build a bit backwards and sometimes I will start finishes before having structural elements in place.

There is no plan, well kind of there is, but that changes on a daily basis depending on what tool I pick up and what I’m working on.

Join along for the journey...
show more
2 months ago
tiny house
Observing life/death/life patterns in permaculture designed systems
Sometimes I have these AHA moment observations and don't know where to put them but feel they need to go somewhere.
It mostly has to do with the difficult moments around bridging the gap and living closer to nature.

So here is one of those stories:

One of my (around 4 year old) hens fell ill about 2 days ago.
It is most likely pox, as that seems to be going around at the moment.
Although it is strange as one would think that after 3+ years in the garden they would have picked up immunity.
It could very well have been something else. I did not autopsy the bird to find out.
Sometimes I just don't have the energy to do that.
It was looking quite anaemic and a little yellow, so it could have possibly been liver related.
Anyhow. I had remarked just last week that she was probably looking the best that I had seen her look in all time.

I treated the chicken, but with little hope... I think we intuitively sense when death is near.
Tried to give her some food and water and put her out in the garden.
As dusk arrived I had a slight panic because the bird was nowhere to be found in the garden.
My chickens put themselves to bed in the coop after a afternoon stroll in the garden, so went t o check the coop and found the sickly hen there.
I didn't think that she would have the energy to make it up the mountain, but somehow she did.

I find it quite remarkable that with almost no energy or life in her, the last thing that she wanted was the safety and familiarity of her flock.
I found her dead in the coop the next morning.

So that was my observation about companionship at life end.
Whether it is instinctual or a matter of routine I cannot tell.
It did make me wonder about the human experience of life end.
Maybe it is important to witness the expression of the full pattern.
show more
2 months ago
chickens 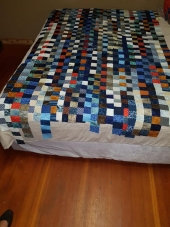 
The top is just about done.
Spent a lot of time thinking whilst working on the top of this quilt.
Eventually the biggest issue was getting the blocks to meet up, and figured if I quilted them in sections and then tried to get them to meet up it might be quite challenging.
The other concern was all the hand work that went into stitching together the batting in the ‘quilt as you go’ video.
So I’ve decided to sandwich the whole thing... or half & half, then secure (pin down/ knot up) by hand, then machine quilt the sandwich.

Any recommendations on the best way to secure a quilt sandwich?
show more
3 months ago
sewing

I've been thinking about how one might provide this batting for the middles of quilts from raw materials rather than already made (purchased old blankets or premade batting of any sort). Animal fibers are first to mind. Sheep, alpaca, goat or rabbit are the most common "farm" animals I think of. These fibers don't require spinning before a usable cloth can be made. They all FELT. And they are all very warm fibers. It's part of my expanding plan for my near future. I figure I've got a good 15 more years of robust activity left in me, as long as I pace myself and take on each new thing only 1 or 2 at a time.

I used to keep Angora rabbits with this purpose in mind. I did brush out and spin their wool using what I assume was a Turkish hand spindle.
Could be used raw. I didn't wash or process the wool prior to spinning, but I did find that some (maybe 2-3) years later some mites got in it and ate up all the wool and left behind a powdery dust.
I don't know if there is something you'd treat it with, but would advise looking into it, cause that could result in a lot of sadness for a lot of hard work. it did discourage me from ever spinning wool again.

Let me know if you have a way of treating natural fibers.
show more
3 months ago
sewing


Very interesting concept, thank you for sharing! That might be a great method for a large quilt like yours. The frugalista in me sees the trimmed batting as a waste; I wonder what uses I might find for it elsewhere? Pillow stuffing, perhaps?

I agree in so much that I cringed quite a bit at those massive overlaps that were cut off. I'm sure that better planning could likely avoid that kind of waste.
I have not looked into strip quilting, I'm not very familiar with quilting jargon, but I understand what I want to do... which often results in me watching YouTube videos to have the words to explain the things. I will go see what it is all about.

I got myself a dog bed as a couch (there might be a fancy yoga term for that), which I will use as a test run for my quilting project.
Thing is, that means that I have to finish laying out the top of the quilt, to see how much of what I have left for the "couch" cover... so a lot more sewing and ironing needs to happen.
I didn't work out how much of what I needed from the beginning as its made up of various left over pieced of material from other projects, a box of scraps I was gifted, and some of it I bought.
Figured I would make some pillows.
show more
3 months ago
sewing 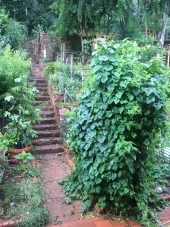 Towards Sky Gardens and Chicken Orchards
Hi Anita,
Thanks for your kind words.
Also realised that I spelled genet wrong (oops).

We don't really have any dangerous (to humans) wildlife around.
A few snakes, scorpions, spiders, but those are kind of things everyone is aware of. It is not often that you hear of incidents that involve wildlife.
Mostly things that you can manage at home.
That being said, I am semi suburban, so most of the wildlife has been driven out due to urbanisation.
I'd say that the biggest problem is probably mosquitos. They don't spread malaria here, but the do spread pox, so the chickens are currently dealing with some pox. Other than that, they are just hellishly annoying.

It really is a wonderful climate for growing just about anything. there is hardly any reason to store food, other than the luxuriant aspects of permaculture lifestyle.
I only get about 3 hours of actual sunlight, the rest is dappled light through mature trees, so my journey has been more about how to turn an invasive forest into a productive landscape.

I find that though everything grows, diversified ecosystem management means the difference between some fruit on a tree, and abundance.
Take for example the avocado. it never used to produce much fruit, then I started deep mulching around it, then I moved in some chickens and built a pond that overflows into the avo root zone, last season I got into beekeeping. so each one of those interventions made it a little bit better, every time you integrate systems, and then one day it just compounds into abundance.

I've only recently started to let my animals work for me (mostly chickens) and that has made me superbly lazy... and now I want pigs and goats and I'm starting to feel like I'm pushing the limits of suburbia.

As far as watering is concerned, I used to work much harder, but then I learnt about mulch and fungi and soil; so I hope to build an ecosystem and soil foodweb that can support all of the things that I plant whilst only relying on the rain.
At this point I am still doing a little watering.
I had put in drip irrigation that I thought was going to be there forever... but I don't need it anymore, so now I'm focussing on moveable hoses that can support establishing areas, and the soil micro-organisms have to take care of the rest.

I hope that answers some of your questions.
show more
3 months ago
forest garden

Towards Sky Gardens and Chicken Orchards
It’s been raining continuously for the last 2 weeks. This is unusual. We were promised a wet summer. Dams are overflowing and there is plenty of flooding in the surrounds.

Found some choice edible mushrooms on the roadside. Picked up a cold due to allergies - probably fungal related, so I’ve not been going at full capacity for the better part of a week.

Divided up the chickens into 2 paddocks. Realized that about 15 chickens is a manageable number for my paddock size. I have great ambitions to send chickens up the mountain to clear the food forest, but need to secure a gate to keep the terriers out.

The gennet got into the coop and killed a young male. It was a particularly ugly young one, but alas, back to locking up this batch of young at night. The gennets seem to have a very specific size in mind when they hunt.

Anyhow, the weather is looking up, we’re in the past month of summer, and it’s time to test out the raised beds with some cooler weather crops.
show more
3 months ago
forest garden