what would you want in a permies women's retreat at wheaton labs?
I’m also late to the comment party, and I’ll add votes to ‘I wanna come!’ and  ‘learning to use power tools, machinery, and axes, etc.’

Female-bodied people are on average 20% smaller than male-bodied people, and have a different center of gravity. We sometimes need to move and hold things differently in order to do so safely, and the differences can be subtle, so learning to use big/sharp/powered tools from a male-bodied person isn’t always as safe for us as it would be for a male-bodied newbie. The tool design itself can be a problem- if you can’t close your hand around something that expects you to do that (I’m looking at you, smartphones and power drills!) then you can’t use it as intended, so you have to choose your tool carefully.
show more
1 year ago
meaningless drivel

Which "weed" do you dislike the most?
Puncture vine. It’s where the Romans got the idea for caltrops, it goes through bike tires, and the seeds last up to 6 years in the ground. Mulch with cardboard (not the best, but solid enough) covered with 10+cm of normal mulch seems to keep it from sprouting. I’ve heard rumors of lawn rollers covered with yoga mats, but haven’t tried that yet.

Real Fast Food Challenge - 10 Minute Recipes?
Thanks, Tina, these are great recipies! I never thought to make carrot noodles for pad see ew, what a great idea, Kate! And Mart, raw food, good call on that and the turkey. I hadn’t thought about it, but I’ll add that to my post-holiday frugal tricks, along with Pumpkin Stewing Day on November 1st. 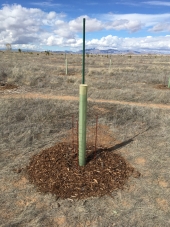 The two things that I’m grooving on recently -

2. Cheese weed - Malva neglecta - has 10-100x the nutritional value of grocery store kale, a mild taste, stands up to cooking (don’t fry, odd texture), and is delicious in salad, palak paneer, and spanikopita. It seems to grow best as a 3-season annual in the un-irrigated, high-traffic, gravel-and-weed-barrier footpaths of xeric landscaping, ideally with a gardener jumping up and down on it, swearing, and tearing at it with a stirrup hoe weekly to bi-weekly. 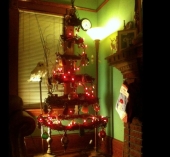 Our Free, Compostable Christmas Tree Made from WEEDS!
A couple years ago, as I was heading out to get a Chistmas tree, I opened my door, and a tree-shaped Russian Thistle (tumbleweed) was sitting on my doorstep. I looked around, said “Thank you!” to Nature, took it inside, and decorated it.
show more
1 year ago
frugality

Real Fast Food Challenge - 10 Minute Recipes?
Thanks, Tina and Chris, those sound delicious! A cheese plate for Christmas lunch, and oh wow, I definitely need to try that kimchi bowl, with eggs and quinoa. The foil packets also look amazing, and are perfectly timed for tomorrow’s CSA delivery that will include ground lamb.

This is so wonderful! I posted yesterday out of frustration, and now I have a fun new project, trying out all these delicious recipes! I’ll try to post pictures as I make them.

Thank you for your well-wishes, and for cheering me up with your delicious ideas!

How to meet girls. Things every young guy should know.
Congratulations Dale, on knowing what you want and asking for what you want. I wonder what tiny fraction of the world does that?

This sounds squishy, but it’s gritty stuff. It means recognizing very deeply that women are people, with their own goals, flaws, and hurts. Think carefully about what it might be like to be her- and not just the great part, where a pair of gazongas come factory installed.

The rules of life are slightly different for her than for you. Some things come easier - maybe she doesn’t realize how hard it is to walk up and talk to a stranger because strangers are constantly trying to get her attention. Some things are harder- maybe you don’t realize that those double-D’s cause vicious headaches if you can’t afford to replace your bra often enough.

This is HARD, and hard not to take personally. What reasons that have nothing to do with you might make a person not want to talk to you? Maybe she just came from the dentist? Maybe she’d rather talk to that other guy at the gym even though you’re way better looking, because he’s her trainer and she’s paying him by the hour?

2. Luke Skywalker vs. Han Solo: Star Wars was written by a man. If you want to understand women, read more books written by women. (Or consume more of your favorite media as made by, not just starring, women.)

“...I do not think I ever opened a book in my life which had not something to say upon woman’s inconstancy. Songs and proverbs, all talk of woman’s fickleness. But perhaps you will say these were all written by men.” Jane Austen, Persuasion

If you’re on this site, you like to learn about stuff you don’t understand. If you don’t understand how to put yourself in women’s shoes, fiction is a good way to do this. Read books written by women, not just about or ‘for’ them. Books written *by* women have a variety of different perspectives from male authors and from each other. Read widely. Don’t assume Ayn Rand, Jane Austen, or Louis McMaster Bujold have the last word on LadyThoughts.

Oh, and Dale, have you read this one?

Serve. Remainder can sit on low/keep warm setting until ready to clean up.
show more
1 year ago
cooking