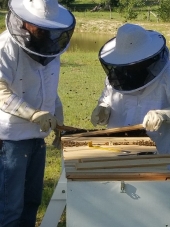 Beesuits: To wear? Or not to wear?

Joseph Lofthouse wrote:I never open a colony without full protective gear, and sometimes I even put on a bee-suit while weeding the garden in the vicinity of the apiary.

That's fine. I wear a suit for part of queen rearing. Not wearing a suit is about me being lazy. I don't care about getting stung, and I take plenty of shortcuts where I get stung. I respect that some people don't like the sting pain. I do up to about 14. I always try to avoid stings unless that means doing more work. I feel safe with the bees. They communicate, so I know they won't sting. If they tell me that they will sting, I have plenty of time to avoid getting stung. I've handled 18 colonies. Some were aggressive, but all could be opened with 0% chance of getting stung. One time, I moved a 3 box colony into my truck. The truck back was closed and screened, but the bees were free to fly out of the hive. I drove 20 miles, then set up the hive. I wore shorts and a t-shirt the whole time (no stings). There's a low chance of Africanized bees here, but there's a much lower chance in Louisiana.
show more
3 years ago
honey bees
Polkadot mulch
Also, I like your ideas and info Bryant. I didn't know that plants pull nutrients directly from mulch. Thanks.
show more
3 years ago
soil
Polkadot mulch
Why I believe that plants feed mulch.:

I used to watch a bunch of farmer videos for fun. Many were from the SARE Youtube channel. All were about cover crops. This includes farmers from all around the US of A who experimented with various crops. In general they planted with a roller crimper seed drill, or broadcasted (often by plane). Some broadcasted while corn was growing. I think they crimper drilled in spring (but sometimes frost seeded) and drilled or broadcasted in fall.
Numerous farmers showed all the following to the point of redundancy.:
1. There were more soil animals where there was a strong cover.
2. Like you mentioned, roots punched through stuff.
3. A farmer begins the practice of keeping the soil well covered with live plants, and minimizing the amount that the soil is disturbed. On year x (x>2), he finds that the crop residue left after crimping rots a lot faster than it did on year 1.

I have done minimal research. When I research, I favor stuff from certain universities. Aside from searching for university stuff, when I want an answer, I use plos.org, and pubmed.gov. I haven't invested time to do that for this topic.

There's lots of research on mycorrhizal fungi and how it rots stuff.:

My other topic about my soil journey