Beesuits: To wear? Or not to wear?

Joseph Lofthouse wrote:I never open a colony without full protective gear, and sometimes I even put on a bee-suit while weeding the garden in the vicinity of the apiary.

That's fine. I wear a suit for part of queen rearing. Not wearing a suit is about me being lazy. I don't care about getting stung, and I take plenty of shortcuts where I get stung. I respect that some people don't like the sting pain. I do up to about 14. I always try to avoid stings unless that means doing more work. I feel safe with the bees. They communicate, so I know they won't sting. If they tell me that they will sting, I have plenty of time to avoid getting stung. I've handled 18 colonies. Some were aggressive, but all could be opened with 0% chance of getting stung. One time, I moved a 3 box colony into my truck. The truck back was closed and screened, but the bees were free to fly out of the hive. I drove 20 miles, then set up the hive. I wore shorts and a t-shirt the whole time (no stings). There's a low chance of Africanized bees here, but there's a much lower chance in Louisiana.

I often put on a bee suit when working in the garden even hundreds of  feet away from the apiary. There is some Africanized DNA running through the bees in my village and apiary, so the bees tend to be pissy. It varies from day to day depending on weather, how the honey flow is going, and what the robbers and yellow jackets are doing. Love the colonies with influence from Africanized bees, cause they sure are productive. Sucks for the beekeeper and family.

I'm not allergic to bees. Good thing, with all the stings I get, even when doing innocent activities like weeding the garden.  The stings are an annoyance more than a hazard. Still, it's an annoyance that is easily avoided by choice of clothing. I still get stung in spite of wearing protective clothing, but it's once or twice instead of dozens of stings. I don't know how the math works out. I've been keeping bees for 50 years, and might get stung 10 times per year. That's much better than getting stung 10 times simultaneously which has happened before.

I might walk through the bee yard from time to time without putting on a suit, but I'm not lounging around! I'm more likely to do that in cold weather, or near sunset.

Because I am too mean to buy one .
I often sit and watch my bees with no protection about a yard away .
Firstly I never place hives close together as I believe this stresses the bees and makes them more defensive as they are watching out for robbers including other bees
Secondly I keep out of the flight path  , bees seems to like a long clear run in to the hive
Thirdly I don't wear any thing like shampoo that might antagionise them
Lastly I remain quiet and calm unlike a bear

When I go into the hive I wear an old shirt, an old sun hat , a veil , long Sleaved gloves and thick socks tucked into my jeans .

Todd Parr
pollinator
Posts: 1793
Location: Wisconsin, zone 4
96
posted 3 years ago
My bees have always been docile enough that I can sit a foot from their entrance and watch them coming and going and doing their thing.  I do that often as I find them fascinating.  On the rare occasion that I open a hive for some reason, I wear a suit.

posted 3 years ago
I'm allergic to bee venom and have to carry an auto injector. (1 hour from sting to dirt nap for me)
I don't even own a bee suit or veil, I have learned how to listen to my bees and how to not piss them off or make them feel like I'm invading.
But I also don't mess with the hive but once a year or to place extra food near for them in the wintertime.
I've been surrounded at times by bees doing their job for our garden and orchard but never stung so far.

Now all that said, if I was going to be harvesting honey more than once a year, I would own a full set of gear and use it.

posted 3 years ago
Yes, unless your name is Yvonne Achard

Vern Life
Posts: 27
Location: Cascadia
2
posted 3 years ago
Only when I plan on doing something where I have a chance at agitating them (typically accidentally, like when I fumbled a frame).

It's more for them than for me, most of the time they let me do my work with them with just a bit of smoke and calm careful motions. They're Italians so they are very docile.
Joseph Lofthouse
steward

Posts: 5654
Location: Cache Valley, zone 4b, Irrigated, 9" rain in badlands.
2236
posted 3 years ago
I'm giggling. Last time I worked with one of my well-smoked Africanized colonies, it was super fun to watch a cloud of bees follow every movement of my hands. Set down the hive tool, and a couple dozen bees would swarm along with my hand. And you know that angry-buzzing noise that's evolutionarily intended to jar mammal senses. Yup so do I !!!

posted 3 years ago
I always wear full protection when I go to open hives. Here in the UK we don't have problems with africanised genetics, but we can still sometimes end up with very aggressive colonies. I took 50 stings THROUGH MY SUIT a while back while trying to move a defensive colony.

I applaud people who feel confident and relaxed enough to go without protection, but you simply can't know for certain how the bees will be from one week to the next. A supercedure you were not aware of a dramatically change their attitude, as can problems with robbing or a dearth.

This kid didn't wear a bee suit while messing  with the bees! Didn't stop him. Today, he owns hundreds of colonies.

posted 3 years ago
I opened the hive to see if they'd eaten the food I gave them. It'd been rainy and cold for days. I figured they wouldn't come out to get me, I only cracked the top to peak. They sent someone. They stung me in the top of my head, in my hair. Burned like hades. I'll wear protective gear always now.

Now I may wander over and replace the water I have directly in front of the hive (think inches away) without anything on. I'm not opening that sucker though.

posted 3 years ago
Yesterday was my first day to play with bees. We set up a top bar and langstroff hive. It shows the protection we used. It went better than i thought.
6YXU5LNa-209443673-480x640.jpg 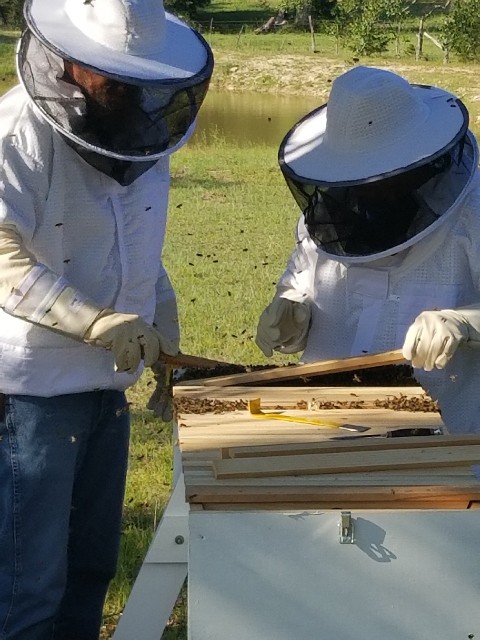 Joylynn Hardesty
master pollinator
Posts: 3414
Location: Officially Zone 7b, according to personal obsevations I live in 7a, SW Tennessee
1306
3
I like...

elle sagenev wrote:
Now I may wander over and replace the water I have directly in front of the hive (think inches away) without anything on. I'm not opening that sucker though.

I will fuss around near the hives without protection. Any opening of the hive, I requires a bee hat with netting. My 'suit' is long pants and sleeves when opening up the hive.

I have found that for the safety of my bees, I need to wear a hat when near the hive. I finally learned at 10 bees, that the curious, though not defensive guards can land in my long hair. Then they get tangled an can't get out. The poor babies get panicked, and BAM!! I am stung, and poor baby dies.

elle sagenev wrote:
Now I may wander over and replace the water I have directly in front of the hive (think inches away) without anything on. I'm not opening that sucker though.

I will fuss around near the hives without protection. Any opening of the hive, I requires a bee hat with netting. My 'suit' is long pants and sleeves when opening up the hive.

I have found that for the safety of my bees, I need to wear a hat when near the hive. I finally learned at 10 bees, that the curious, though not defensive guards can land in my long hair. Then they get tangled an can't get out. The poor babies get panicked, and BAM!! I am stung, and poor baby dies.

The one that stung me did get tangled in my hair. Man. I'm wearing the hat now as well. Lesson learned!

posted 3 years ago
I sit & watch just a few feet from my home hives (out of the flight path of Bee O'Hare) daily. No problem. I'll wander around around a large apiary all day long without any protection. No problem. Completely comfortable doing so. Sometimes I'll even open the inner cover for a quick peek without protection. Once I tried to snatch an empty queen cage that seemed unguarded. Wrong. Took several stings for that. I worked them a few times early in my bee keeping adventures without protection just to see if I could. No problem. That being said ... some bees are meaner than others & they can be unpredictable as well. Some of my hives are in very remote wilderness so for my own safety I developed the habit of always fully suiting up before removing any frames or venturing inside any hive for any reason.

I invade their home as little as possible. We all get along better that way.

I was raised around bees.  My father has up to 30 hives.

I remember reading the bee journal that were published in the 60's and 70's
Every once in a while there was a obituary-type notice about an old-time
beekeeper that was found dead in his apiary with evidence of being stung and
getting a heart attack.

It happened often enough that people started to believe that maybe there was
only so many stings a human body can be subjected to.

posted 3 years ago
When I had bees, I bought a bee suit that I  seldom used. I might have been stung once or twice.  Ditto for the smoker. I used it a couple of times and stopped.