Merit Badge info
Forum Moderator
Mike Barkley currently moderates these forums:
After a long career electro-geeking for R&D labs in the electronic industry Mike has checked out of the rat race & moved to the woods. Not entirely off grid but trying to achieve that goal. He raises a few animals & enjoys growing healthy food in various gardens. He is a life long nature lover, adventure seeker, & to a certain extent a minimalist. Eventually bears will probably eat him & turn him into compost. He is ok with that.
mountains of Tennessee
permies.com
Apples and Likes
Apples
Total received
655
In last 30 days
17
Total given
2175
Likes
Total received
2973
Received in last 30 days
59
Total given
3294
Given in last 30 days
56
Forums and Threads
Scavenger Hunt

Try the greens once the plants can spare a few. Discover why the animals like them so much. Yum.

I had just finished planting sweet potatoes when that late cold blast arrived. They struggled a little but survived & look good now.
show more
12 hours ago
gardening for beginners

Details for a hollow log hive
A drop or two of lemongrass oil goes inside the hive. I don't think it matters exactly where other than inside.
show more
5 days ago
honey bees

Everything is eating my brassicas!
BT is a natural product to use for cabbage moths. I haven't needed it for a few years but it does work.
show more
1 week ago
bugs

Everything is eating my brassicas!

If we plant brassicas in the late summer/early fall for early winter harvest, are there fewer pests?

How much comfrey does one need?
There is probably a practical limit but it seems hard to harm a comfrey from taking too much. I cut it to ground level several times per year & haven't lost one yet. About half of the plants at a time so some are always blooming. Bees, butterflies, & chickens all love it. They pop out new leaves within a day or two & just start growing again. I also have at least one for every planting area. It's usually the first thing I plant in new spaces. I have a sterile variety but it propagates by root division very easily.
show more
1 week ago
mulch

The Keeping Bees Naturally book we reviewed last month & another top bar reference I have both recommend 1.5" bar widths. So I think the 1.375" is close enough. Langstroth frames are barely over an inch.

Not quite sure what you meant by permanent bars in the lower section. Is that going to be considered "bees only" space?

Hard to get a sense of scale from the pix. Is it 5' tall?
show more
1 week ago
honey bees 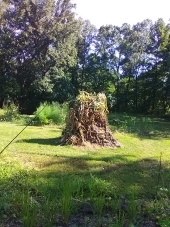 chicken down hugel up
A storm broke a tree limb so it seemed an appropriate time to start expanding Humphrey. Simple enough. Dug a hole. Filled the hole with the tree limb pieces & the original soil. Then mixed the remaining soil with some mostly composted cow manure & decayed wood fragments to top it off. Planted yelloweye beans in the new space. Might add a watermelon or two tomorrow. Rain is predicted for most of the next week so I'll try to dig up enough of an area to build another hump. Much easier to dig this soil when it's wet. There's a 120 foot maple tree nearby that fell last year. Plenty of wood!

Haven't watered the wild rice in about a month. It's still producing grains & birds still eat them all. Nothing else has been watered yet this year, except by rain. Since the last update there has been 6 or 8 grocery bags of chard, kale, & cabbage harvested from this project. Mostly chard. Gave it a mulch of about 20 large dried & crumbled comfrey plants today. The sunroots & tomatoes are getting large enough to almost completely hide the hump. Many young tomatoes on the vines. Started using some sticks to train the tomatoes off the hump so the other plants can grow too. They will need serious stakes soon. The last of the peas have been chopped down & the first squash was harvested earlier this week. Some beans are starting to climb. Corn, strawberries, & the elderberry are still doing their thing. There are some nice beets hiding among everything else. Might have to send search & rescue to harvest those. Threw some basil & oregano seeds on it a few days ago. Various flowers are almost ready to bloom.

If memory serves the original footprint was 49 square feet. Slightly larger now. It's now feeding 9 people on a regular basis. I prefer that over useless lawn any day!!!

show more
2 weeks ago
projects
How do I make a large correction with plants already growing?
Compost is somewhat of a ph buffer so I would keep adding that. I use wood ashes to help with our acidic soils. That also adds some trace minerals. Using some atzomite &/or sea salt also adds trace minerals. I would be cautious about making large corrections with plants already growing.

Here is Dr. Redhawk's excellent soil series. In case you want info from an expert. Much more info!!!
show more
2 weeks ago
soil