What's Up With Your Honeybees This Week???

Posts: 5517
Location: Cache Valley, zone 4b, Irrigated, 9" rain in badlands.
2137
posted 5 years ago
.
.
Been doing anything with your honeybees this week?
Got any photos to share?
Stories to tell?
.
.
I checked about 30 hives today and added honey supers to colonies that needed them, and took some away from those that didn't. Weeded around the entrances. 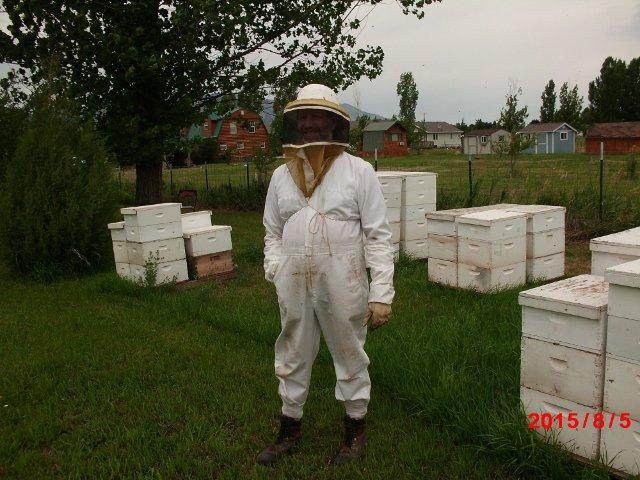 I changed my costume today... Usually I wear a pair of cowboy boots, and stuff my pants down into the boots. Bees climb upwards when they get on something, so it's a safe way to work them... Today, I wore a lace-up pair of boots, and pulled my socks up, and tucked the pant legs into the socks. BAD IDEA!!! About 7 bees stung me though my socks. My brother says that he is not responsible for bad language in the bee yard. I left my working partner in the bee yard without so much as a by-your-leave, and ran off and took a couple of Benadryl tablets, and removed the stingers, then went back to work. Usually we carry Benadryl with us in the bee yard but, didn't have any today, cause it was supposed to be just pop the lid off and add honey supers.

There were a couple of colonies that didn't fill up the honey supers that we gave them a few weeks ago, so we opened them up to take a look. They were very ill-tempered. They get that way if they loose their queen. So we poked around looking for brood. Found old queen cells, but no sign of an active queen. They repaid us by attacking... These colonies might also have a bit of killer-bee genetics mixed up in them, since some of them are migratory colonies. That's a bonus because they do everything more aggressively, including collecting honey. Tough on the beekeepers though. There's a fine line between better performance and too much aggressiveness.

We found a new colony that had occupied a vacant hive by squeezing in through a tiny crack... We set them up more comfortably.

Later in the day I thought that I would weed the garden 100 feet away from the apiary. The bees were still cranky, so I went and worked in a different field.

My ankles sure are itchy tonight!!!

posted 5 years ago
I don't keep bees, but I have a wild hive at a known tree location about 75 yards from my house and presumably more I haven't located elsewhere on the 40 acres. I've got a few bee watering stations (shallow containers full of water and small rocks) in my garden to encourage them a bit. Today was hottest so far of the year, and I was lounging with nine-year-old nephew-in-law in our 18' above-ground vinyl swimming pool. While we were in there, the colony set up a water supply run, sucking up the beads of water our feet left on the treads of the plastic pool ladder. We had about three bees at any given time sucking up the water, with coming and going sufficient to keep three bees on station at all times. It was impressive to watch them work from up close; they didn't mind at all being watched from six inches away as they worked.

Posts: 3605
Location: woodland, washington
147
posted 5 years ago
I watched my bees for a while. they seemed content. didn't feel the need to break open any hives. no queen failures, no stings, just bees doing bee stuff.

Rob Browne
Posts: 65
Location: Blue Mountains, NSW, Australia
posted 5 years ago
Mine are all bunkered down when I go to work and when I get home. They come out for a few hours during the day which I enjoy on the weekends.

posted 5 years ago
Sometimes I wonder just how well-organized bees are.

In the last few days after I saw the bees drinking from the droplets on my pool step, I put a towel over the edge of my pool that would wick up some water and give the bees a safe place to land and drink. This morning after watering my garden I jumped in the pool to wash off the flopsweat, and I noticed (it was hard to miss!) that in addition to the half-dozen bees working the wet towel duty, there were another dozen-to-twenty bees buzzing around the bee-watering area in a highly agitated state. This was of some concern to me (agitated bees worry me in a way that mellow working bees do not) but I carefully worked my way closer until the source of their agitation became clear. On the outside of the pool, near the damp wicking towel, there was a very fat happy frog, who had (I presume) been merrily eating from the worker-bee buffet as they came and went.

I know bees will defend the hive. But do they send out combat air patrols to defend workers at remote work sites? This was news to me.

I shooed away the frog and soon the angry bees went away.

Yesterday and today we extracted honey. A lot of it... What a sticky mess!!! Sorry about not taking photos: seemed like too much risk to the camera. I look forward every year to the smell of the honey-house. What a pleasure. We had 8-9 family members helping both days. I escaped this extraction without getting stung. Most of the rest of the family weren't so lucky. Benadryl pills were handed out as needed. I suppose that I missed out on the worst stinging opportunities because I went to the farmer's market yesterday while the colonies were being robbed. I love the camaraderie. Every new family member that arrives gets to hear the increasingly embellished stories of the day's bee stings. Heaven forbid if someone gets stung on a boob or other sensitive place: Especially if they are highly sensitive to the venom and swell up. It was lots of work using expensive tools and equipment. It helps me put the high cost of honey into perspective.

John Master
Posts: 519
Location: Wisconsin
8
posted 5 years ago
I went from 2 hives last season to a max of 9 this year. Just recombined a strong queenless hive with a very small hive that managed to raise a queen, going to see tomorrow how well the newspaper technique works.
These were from a swarm capture that lost its queen right after I got it installed. so I gave it a few square inches of comb with new eggs, and they in turn built 31 queens from it and the eggs that were laid. Instead of seeing if I could get 1 queen out of 31 cells (pretty good chances I would say) I divided the hive into four and gave each one a bunch of queen cells. After a week I was able to see two of the 4 hives with queens, waiting on the third, it still has some eggs to hatch maybe see the queen tomorrow. My goal is to divide up all the stores made this year between all the hives and give as many of them as possible a chance to get through the winter. A couple of the hives are starting from scratch and it's already august so they will need some help for sure. Next year will be the third year, hoping to start with mostly built comb and enough hives that I can split them instead of having to pay for bees and if all goes well finally have a honey harvest. Takes awhile starting with mostly blank foundation for the bees to build out all that comb.