What can I plant to provide privacy AND function
You might consider two rows; a row of evergreens and a row of mixed edibles. Apples, peaches, nuts, grapes. What you like. I'm thinking that a row of bamboo in time will take up more space than the double row. Don't plant evergreens that will grow immense, like I have here.
show more
15 hours ago
plants 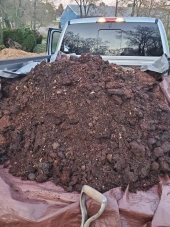 How does this horse compost look
I have used a lot of horse manure since the mid 1900's. I'm not happy with what's happened to agriculture over that time; but I've never had any suspicious crop failures using manure. I'm more comfortable eating the crops I grow than what's available for sale. That said I'm still careful with how I use manure. I don't grow root crops in soil the same year I add manure. Same with leafy veggies. I eat the skins from the potatoes I grow but not from those I purchase.

I would like to have a horse and a couple steers; and I'd like to grow what they eat. Corn oats and the hay. I think I'd trust the manure and or the hay from an Amish/Pennsylvania Dutch farmer. But they probably use all the manure for their own fields.
show more
1 week ago
composting

How does this horse compost look
Looking at your picture of the horse manure in the truck I'd say this is excellent compost. When I see manure with wood chips here it looks like wood chips with maybe some uric acid and nothing else. I would treasure your manure. It's obviously well composted.
As far as the aminopyralid issue, I'd say that you're more likely to find herbicides in the food you eat including veggies, dairy and meat. And it's quite likely in the water you drink. And it's also likely to be in any compost you make or buy.
The question I have is whether this herbicide may have come from the horse, or the wood chips; if there were any.
show more
1 week ago
composting
lead service pipes, lead in the garden?
You could run your water for awhile before watering your garden or drinking or cooking. Particularly in the morning or when a line hasn't been used for a while The longer the water sits in the pipes the more it absorbs. Sometimes you can taste it.
show more
2 weeks ago
soil
apple root stock from seed
There is  an apple rootstock that can be grown from seed. It's called Antonovka. I have seed I bought and am having trouble getting to sprout.
Another possibility is to buy a rootstock and Stool it to reproduce it.
Fedco sells Antonovka, but is out of it. Cummins Nursery still has rootstocks for sale on the web. Probably because their store was closed? But if they sell that one I can't find it.
Antonovka is a rootstock from Russia and will produce a near full size tree. Another apple that can be grown from seed and reproduce accurately is Fameuse. That one is not used as a rootstock, maybe because it's an edible apple.
show more
2 weeks ago
trees

Thoughts on Seed Saving with Joseph Lofthouse!
If you want to grow veggies AND you want to save seeds; It's very easy. IF you only grow one variety of each veggie. Tomatoes are an exception. But with tomatoes you have to grow heirlooms and if you do you will have success with the number of plants a gardener's likely to grow. With tomatoes, from my experience, the only time you'll have a problem is when you plant Mortgage Lifter seeds in a cell or pot marked Pink Brandywine.
With Cucumbers if you also grow pickles your seeds will be mysteries. Peas and beans will be OK. I'm testing growing string beans and lima's in the same garden this year. I've saved lettuce and radish seeds. I save seeds from 3 different size pumpkins grown together. And I grow one zucchini variety which I've saved seeds from for years.
If you've never saved tomato seeds and you're put off by elaborate instructions just use a teaspoon. Dip into a slice of tomato, before you salt it, and put the seeds on a paper towel and mark the variety with an ink pen. Your done! I'm just trying to convince you to do it. Save some seeds. If you want to get technical, get nice clean seeds. Seeds that you can shake into an envelope. Then try fermenting some. But get some seeds saved.
The important parts are growing heirlooms and saving seeds.
That said, I enjoy following the tales of some of you. I enjoy reading about Joseph Lofthouse's gardening experiments

show more
2 weeks ago
seed saving / exchange / plant breeding
Dwarf Apples for New Gardener
I was searching for apple trees that grow with low vigor thinking that if both the root and the tree were slow growing it would be good for growing in a container. I found Britegold and also remember when searching for hard cider apples a number that were low vigor and some that were bushy growing.
However at this site they discuss growing a low vigor apple tree on a dwarfing (low vigor) rootstock and don't recommend it as it's likely to not fruit. At any rate you might be interested in the very long list of apples and their vigor. They call a low vigor tree a T1 and a high vigor tree as a T3.
I think you should consider some soil in your container for the minerals. As an example I once researched the causes of russeting in apples and found that low boron can contribute.
show more
3 weeks ago
fruit trees
Feeding corn organically.
If you want to grow corn organically, you have to start somewhere. The food you're eating now likely has the same herbicides as is likely in the hay and grain the horses ate; assuming you're not growing the herbicide free corn to feed cattle for your future food. It's convenient if you have an endless supply of compost for your new gardening plans. Everyone in this country has access to a horse boarding facility, even those in New York City from my googling tests. There are a lot of folks looking to get started gardening in these times; and there is a lot of of manure out there to help them grow the food they desperately need. I obtained some late this winter and they begged me to take more. I checked another site a week ago and there had been one person take a small amount. This site was paved up to the manure pile and was a slight slope down to get out. But it was very old manure with wood chip bedding.
I don't grow root crops or leafy veggies in soil with recently added manure. If I start a new potato patch I dig in the manure the previous fall. I grow lettuce in the ground I grew, for instance tomatoes, the previous year.
show more
3 weeks ago
gardening for beginners
Feeding corn organically.
I googled "horse boarding price hill oh" and didn't go farther than the map that came up with 11 dots on it.
Call those near you. They will usually be thrilled to let you haul off their horse manure; free. Get permission to visit, judge how easy it is to get back out. Judge the quality. Composted manure will be black. Composting manure will be grey and steamy. Fresh will be brown rollers. And you need to look at the bedding. I walk away from manure with wood chips. There's usually nothing there except the chips. Some will be bedded with straw, and barns with bare dirt floors won't have any bedding, maybe  some hay. Either of the last two are fine with me.
You need to judge how much you need in inches. If you had rich black loam I'd suggest an inch. If like me you're amending raw clay I'd suggest 3 inches. Dig or till it in. You won't need any other fertilizer for the rest of the year.
In the parts of the garden where you don't grow a crop that uses so much nutrition you won't need any fertilizer next year either.
show more
3 weeks ago
gardening for beginners