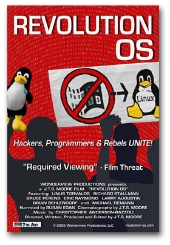 John Weiland wrote:So I'm pulling my hair out on a tangential problem.
I've been able to access/enable the "Boot menu manager" as well as the "Boot order menu".  The Boot order menu has a lot of offerings including USB-FDD, USB-HDD, a network option, along with the main hard drive and the CD-ROM.  I've changed the order so that the priority sequence is 1. CD-ROM, 2. USB-HDD, and 3. Main HDD before the other options.  This does not enable booting to the USB drive and the system goes into Windows.  Additionally and unlike Win7, the USB bootable (Linux) drive is not seen in the Boot Option Manager so there is no way to simply select the drive and say "That one!....That is the drive from which ye shall boot!" :-/

Move your Main HDD all the way to the bottom of the list. I'd say just move the USB-FDD up, but cover all the bases and drop the HDD to the bottom.
show more
2 days ago
meaningless drivel

2. Turn off screensaver. Menu > Control Center > Screensaver. On some PCs, it locks up the system.

3. Check if Wifi power management is On or Off. Open Terminal and type "iwconfig" to find out. Turning it off is a more involved process. But when On, it has a tendency to put wifi to sleep and then fail to wake up without rebooting (grr).

Yes to number 1! Just make sure that you're prompted for root authorization. I prefer to just open the terminal and use 'sudo ufw enable'. Three's no question.
Regarding number 2  I turn the standard screensaver off as well, then install xscreensaver and usually some of the additional libraries. I don't know it it's more stable but it's more fun and more customizable. I like to rotate the Star Wars with a text file of whatever I'd like to see scrolling, Pyro for one type of fireworks and fireworkx for standard firworks. I'm not sure if the Hibernation or Sleep settings have much to do with the locking up, but I disable them as well.
I haven't had a single wifi problem.
show more
2 days ago
meaningless drivel

Cécile Stelzer Johnson wrote:Wow, Blaine! I knew very little about that, and yes, it is really creepy. All along, while people have been going to war to "safeguard our Freedoms", who knew that we could be "owned" by something smaller than a breadbox that sits in our office or that we can carry in a pocket! Resolution for this New Year: LEARN MORE on this topic. How did you get this savvy?

Lacto-Fermented Pickled Sunchokes
If the Inulin, the fiber in them ferments in the small gut, gas is produced. In a perfectly balanced gut biome, this fermenting wouldn't happen until in the large gut and there wouldn't be nearly as much gas produced, but we live in a world of preservatives and sugars that throw the healthy gut balance way off. If the Inulin is converted into Fructose, the gas isn't an ... issue! I'm a terrible punster.
There are four ways to convert Inulin into Fructose. One is to cook them for several hours. Two is to cook them in an acid such as vinegar, citric acid or lemon juice. Three is to thoroughly freeze them. Frosts don't really reach them in the ground, but frosts do help drive the nutrients in the leaves and stalks down into the tubers making them sweeter. For some, this is enough to reduce the gas, but not for all. Four is to ferment them. They can be fermented like refrigerator pickles, lacto-fermented on the shelf, then moved into the fridge. They can be fermented like sauerkraut or in a Kimchi. There is actually a fifth way. I take an Inulin supplement for gut health on a daily basis. My guts are well accustomed to Inulin and I can chow down on them raw in the fall with no ill wind effects.
We can most of the ones we pull in the fall as pickles and relishes. The vinegar and the canning process followed by shelf storage cures every bit of the gas problem. And the pickles? I like them better than cukes! The rest we leave in the ground over winter. In our Zone 5 area, as soon as I can work the soil, I pull more for cooking and eating raw. They can be harvested until they start to sprout and that happens when the soil reaches about 50°F.
I've dried raw chips, ground them in a food processor into flour and used it to thicken stews and gravies. It's a heavy flour, like Buckwheat, it has to be mixed with other lighter flours and it has to be mixed with wheat for it to raise. A bit added to thin crust pizza dough makes it much stiffer. I also toss chips onto pizzas for a different taste.
I'm going to try to overwinter some in 5 gallon buckets, layered with sawdust on our back deck. Our winter temps can drop to -20°F so I might have fun breaking some loose on really cold days, but I figure I could bring a bucket inside to thaw a bit and dig some out. If it works, we'll have some all through the winter. I wish we had a root cellar.
They're called Topinambours by the French, and by the Algonquins, Kaishúcpenauk, a compound of "sun" and "tubers". Kaishúcpenauk, from - Thomas Harriot. A Briefe and True Report of the New Found Land of Virginia (Kindle Location 273). The Mohawk name is Ohnennata’ó:we, original potato. Let's all take a moment to pronounce the Native names ... OK, long enough. The Pennsylvania Dutch call them Aerdebbel in their Pennsylfaanisch. They're Cicoka in eastern Europe. To those of the Manglish persuasion they're called Fartichokes.
show more
4 months ago
fermentation 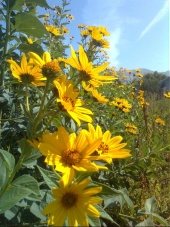 The great big thread of sunchoke info - growing, storing, eating/recipes, science facts
We go the already prepared way with Mrs. Wage's packaged mixes. We have a couple different recipes left over from last year and I picked up a couple more a few months ago. Around here they've been hit hard and nearly cleaned out as are most other canning supplies.
Cooking them for several hours as in a slow cooker, cooking with an acidic ingredient such as vinegar or citric acid, deep freezing for at least a day, or fermenting them as sauerkraut or Kimchi are the four main ways to convert the Inulin into Fructose and get rid of the gas issue.
show more
4 months ago
plants

The great big thread of sunchoke info - growing, storing, eating/recipes, science facts
We can most of the ones we harvest in the fall as pickles and relishes. Vinegar in the canning process + during shelf storage converts the Inulin into Fructose. I prefer them to cukes! After the winter freeze in zone 5 converts the Inulin into Fructose we harvest for canning like canned potatoes, roasting, grilling, adding into soups and stews, stir fries, boiling and mashing alone or mixed with potatoes and sometimes some garlic, frying as home fires and hashbrowns, raw in salads or just for nibbling on, dehydrating for chips and we grind chips in a food processor for flour. The flour is a heavy flour, like Buckwheat, you should mix it with other flours for lighter dough and you have to mix it with wheat to get it to rise.
I take a daily Inulin supplement for gut health so I can handle the fresh Inulin in the fall, so I also eat them any which way without any gas effects then. Some people have little or no gas effects from eating Inulin in the fall while others aren't fit company to be around!!
show more
4 months ago
plants

Chicken run perennials
Take a look into Helianthus Tuberosus, Jerusalem Artichokes AKA Sunchokes. Once you've got them established some of the varieties spread like crazy while others spread slowly. They are perennials and totally maintenance free and disease free. Typical Ron Popeil's "Set it and forget it". Chickens love the young tender shoots and will take them right down. When the 'chokes get around two feet tall you can turn the chickens loose and they'll just eat on the lower leaves and the bugs the 'choke plants attract. When the stalks die and dry in the late fall the tubers can be exposed and most chickens will dig around and eat them raw, some won't. If you boil or roast the tubers all chickens should love them when softened. The tubers are packed with minerals and polysaccharides, very healthy for chickens before winter sets in. The dead stalks attract ground beetles, pillbugs, snails and slugs when they're piled. The 'choke plants along a chicken run will provide a windbreak and shade for the chickens and the ones that spread into the runs will give the chickens young shoots to eat in the spring.
show more
4 months ago
chickens