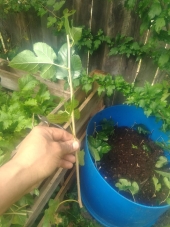 Pear and mulberry cuttings seem to be thriving...
I would be interested to see if there were any success stories doing this with things like Oak Trees or tree's that have extensive tap roots.  Mulberries are VERY hardy (at least where i am) most people can't get rid of them lol and i planed one from seed 2 yrs ago and it's over 6ft tall.  This is awesome work though.  I'm interested to see it keep going

Fence Row Planting - Suggestions Requested!
I have Gooseberries planted along my fence row.  They don't really flower but the do stay green basically from the time winter ends until fall really sets in.  They're really low maintenance and produce edible fruit for people and birds.  They're thorny and bush so they also make good habitat.
show more
2 years ago
urban gardening
31 degrees F in a couple days, then around 32 for a couple nights
I believe both Autumn and Goumi can take the cold for a bit.  Cherries i'm not sure about.  My experience with peaches is they don't typically tolerate the frost well but i've had luck with apricots.  Apples in my experience depends on the type.  For the most part i think they'll be ok.

My gooseberries are setting blooms and we're expecting 28 and 31 a couple of times this coming week.  I'm worried about them.  Also worried about my mulberry and oak.  Last year we grew an oak and a mulberry from acorn/seed.  The mulberry is about 1.5ft tall and has leaves opening up and the oak's buds are opening and i expect leaves tomorrow or saturday....hoping this cold doesn't kill/stunt them now that they've opened up.
show more
2 years ago
berries

Very basic swale design question
That's my understanding as well.
show more
2 years ago
permaculture
Starting over
I agree the leaves are great mulch.  They're perfect for helping to build that soil that you're looking for as well as they can often contain minerals mined by the tree much deeper down than your plants will reach.  If you've already put down cardboard then you can just mulch over top (sheet mulching).  As for stopping the weeds, many people cover their beds with black plastic.  This can cause the weeds to germinate much earlier in the spring than anything else then they die off because they can't get light.
show more
2 years ago
gardening for beginners
Farmers Panic Buying
Article:   https://www.msn.com/en-us/finance/news/farmers-are-panic-buying-to-keep-america-e2-80-99s-95-million-cows-fed/ar-BB12jy9v

Personal thoughts are along the lines of:  If these farmers practiced permaculture then we wouldn't have this potential problem.  We might with the butcher shops and with the trucks but the feed of the animals wouldn't be in question.  Anyone else have thoughts?
show more
2 years ago
cattle

Pics from Jeff’s new berry farm in north Idaho. Need help choosing high-producing berries
I'll second you Jeff with the gooseberry choice.  Get a breed that makes larger berries and they are very productive, easy to propagate and typically they're picked green before the birds eat them.  They do have thorns but they can work good for edging because of it.
show more
2 years ago
small farm

Do Willows grow from cuttings?
This is my story from last summer.  I have the plant in a pot to over winter then it's going into the ground should it have survived outside all winter.  Thus far it still looks good.

Best elder-gooseberry-currants for Ohio valley Zone 6
Sorry as to the growing in your zone, as long as you don't put them in the bottoms and they can drain they'll thrive just about anywhere in your zone.  They're pretty tough.  Not blackberry tough, but they're not a fan of standing water.
show more
2 years ago
forest garden

Best elder-gooseberry-currants for Ohio valley Zone 6
I've not had elderberries or currants but i've been raised around gooseberries and have some at my place now.  I like them but i wouldn't recommend them for smoothies.  Gooseberries are a touch seedy for smoothies.  Also, with gooseberries early in the season when they're green they're sour.  This is when i like them best. Raw as a snack, halved and tossed in a fruit salad for a kick, or i've turned them into jam.  The upside for JAM is there is no need for pectin.  The green berries have enough naturally occuring pectin.  My wife enjoys them later in the season when they start to turn a purple color.  They lose their tartness and gain a very nice sweetness.  At this time they'd probably be ok for a smoothy.  The bigger issue is if you let them get purple the birds will be on them in no time unless you net them.

Other things (good or bad) that i've noticed.
1) They spread.  Birds eat them no matter what you do and then poop them out somewhere else.  I have them in one spot initially.  3 of my neighbor's have them now in their fence and i've spotted them under several trees in the neighborhood now.  Seed grown ones aren't always 100% faithful to what you plant, but they're pretty close.
2) Easy to propagate.
3) Good brush for nesting animals or small animals looking to get out of the sun.  My cats love it in the summer.  Bunnies love them as well.
4) Thorns.  They have them...doesn't really mater the variety.  Easy enough to avoid them but they are there.
5) Good fence row.  You can grow them along a fence and or treat them like a fence row.  If they're in full sun they can get to about 6-7ft tall for older canes.  They can get dense enough to keep most things out except small animals that will go under them against the ground.
6) They do need pruned from time to time.  Especially if you find dead/unproductive canes or canes that have mold on the them.  Not hard to do in the fall/winter (that's when i prune mine).
7) I've peeled them and used them similar to willow trees to make a rooting water with some degree of success.  Not as good as willow but still passable if you have nothing else.


Hopefully someone can provide you the same thing for the others that i have provided here for the gooseberries, but i lack the specifics for them.
show more
2 years ago
forest garden