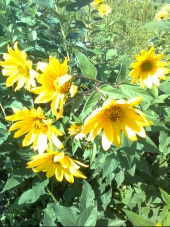 are jerusalem artichokes good for bees?
Snapped this picture earlier today. There were about 15 or so honey bees on this patch when I passed by. It's getting pretty chilly here and beyond mint and sunflowers, there's not a ton of options so maybe it's better than nothing for them.
show more
10 months ago
forest garden

are jerusalem artichokes good for bees?
We have "diversity sunchokes" that we received from Oikos before they shut down. They are in full flower now and we have seen a total of 3 honeybees on them. Not nothing, but also nothing to write home about. Will be curious what if any viable seed comes from them as they are a big mix of varieties.
show more
10 months ago
forest garden 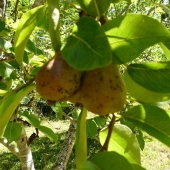 pear tree issue
Not sure if pears can be susceptible to scab but we have a few apple trees that suffer from scab and have some fruit that looks just like this. We've been able to manage with foliar sprays of nettle, burdock and fish emulsion.
show more
11 months ago
pears
Companion plants for Duborskian rice ?
We're growing another upland rice this season called Loto. We ended up having cucumber vines running through it and they seem to get along well. I imagine squash vines, maybe winter sqaush, could also work. The only thing I was nervous about was squash beetles, but they really didn't bother anything.
show more
11 months ago
grains and pseudograins

permaculture hops production
Zone 4b here. Hops are in their 3rd year and while this year's setup may look chaotic,  I think we're finally on our way to a more permanent solution.

I grew bines up about 4 feet then ran them up string to the opposite end of the building gently sloping up. Along the way they run over an old metal drum (more on that in a second) and through my new Jerusalem artichoke plantings. The artichokes are definitely holding their own as a support for the hops. The drum collects rain water in the lid for long enough to act as a water spot for our honey bees which are using the hop leaves as a platform to land on and drink the water. But the water seems to be evaporating fast enough that no mosquitos are attracted to it.

The rest of the bines I let go this year instead of cutting back to see what would happen and they're making a pretty epic ground cover. The only think that's not working great is our marshmallow which is getting a bit yanked down...but also hanging in there.

This setup is south facing so I'm guessing that might be helping to keep any powdery mildew at bay. Also the hops are called alpha aroma, not sure if they might be a less susceptible variety.

Just my 2 cents on what seems to be working here.
show more
11 months ago
permaculture 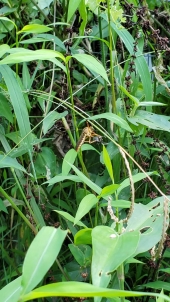 So long Japanese beetles, there's a new sheriff in town!
So amazing how they use camouflage of mimicry
show more
1 year ago
bugs

So long Japanese beetles, there's a new sheriff in town!
We caught this beeline robber fly in our sunflowers the other day, and have also let a ton of  wild flowers and plants come up in our garden. Curious if anyone knows if they have favorite plants?
show more
1 year ago
bugs 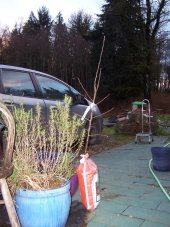 Alice Tagloff wrote:Even fully grown, 30 year old apple trees sometimes need a trellis. Even if this trellis looks more like a support jack. We have apple trees around my hometown that are older than my grandparents, and in the recent years with the warmer weather, over produce to such an extent that the fruit threatens to snap the branches off the trees.
There's one particular tree in town that has support beams under all it's limbs, literally, 4x6's, and steel jack beams in the past few years. But these beams are only necessary when there is to much fruit on the tree, or so the owner goes about it. It's a dwarf, short tree, and one year he used a car jack to shore up the lowest limb.
The scary thing about the apple trees around my hometown is that none of them are grafted, back then, people around here took what they could get, and that was the local 'farmer' starting trees from seeds, or a bored house-wife trying to grow it for a lark. So -all- the branches on all the trees around here, flower and fruit.  One of oddest trees in town is this yellow apple that just might be a honeycrisp, when the tree fruits, the apples are often grapefruit sized but extraordinarily soft, even letting it fall or grabbing it to hard will bruise it. All the other trees are some variant of crabbe apple for the most part.

As for an apple tree flowering and no fruit, a single tree is probably not a cultivar(self pollinating), you often need a second tree that's male, big box stores often have no idea what they're selling when it comes to fruit trees, and the nurseries that sell to them often don't care to have grafted branches from both trees onto the rootstock, which makes the trees more expensive. The ones you tend to get from big box stores often only have two or three branches that are grafted to bare fruit, meaning that if you want to get a full blown tree with fruit all around, you eventually have to do your own grafting. And even then, you have to get your pollinators drawn to the tree, especially if it's not 'common' in your area, they don't know what it is. My parents are now finally getting apples from their trees, and it took putting planters full of lupines between the trees to get the bees to even go near them.

What you should try to get to compliment your apple tree would be a Gage tree. Green Gage's are like a cross between a plum and a Damson. They are sweet, rich in vita-c, and heavily juicy, when you bite into a properly grown Gage, your not eating your first bite, your drinking it. Around here, there used to be some Gage's, but a tree blight resulted in almost all the Damson's and Gage's getting cut down, which is a crying shame. Gage trees originated from England, so they get to be quite frost hardy. Around here, we're about zone 3/4. Damson's are a small type of plum/grape, they're like sour-tangy prunes with large stones in them. There have been years where there's no apples because of the weather, and the Damson's -always- bear fruit. They're also frost hardy, and both types of trees lend to jam and jelly making, tho you can just bottle Gage's. Gage's and Damson's are cultivars, meaning they don't need a second tree, but all cultivars do well with something of the same type around, especially each other. The ones we had in our old homestead garden, were actually planted together(like someone had a bucket of the stone pits and just dumped them down a hole to see if they'd grow), and they grew up in a big pile of multiple trunks twined together, some years you couldn't tell one fruit from the other.  Tho be warned, a well-growing Gage and Damson tree will get to around 30 feet, or something with a canopy like a Dogwood, so they need their eventual space, and they're often hard to find.

I think that yellow apple you mention sounds an awful lot like a yellow transparent. Does it happen to fruit really early in the season?
show more
1 year ago
fruit trees
Super cold plums
Not sure on the cultivar as it was here when we bought the property. It definitely has some gummosis going on but I think that is more due to our woodpecker population vs borers. Regardless, it seems to handle itself just fine and remain productive. So I guess its entirely possible to raise productive plums in this zone if you have the right placement and variety.
show more
1 year ago
plums
Super cold plums
We live in northern Vermont, zone4a and have what must be a 30 plus year plum tree that gets a bumper crop every other year.  I think the trick is its planted on a northern slope and shaded somewhat to the south by a large apple tree. The trick there is delaying bud break and flowering that can get ruined by our frequent late frosts.

We're going to be planting some more plums this year and see if we can continue to have success.
show more
1 year ago
plums